Adrianna was born at Tennes, Balsfjord, Norway on 5 March, 1849. Her parents were Elias Anderson and Beata Hemmingsdatter. Shortly after her family got settled at Lake Lillian their home caught on fire and burned to the ground. After the fire Adrianna would cook meals on the cook stove which was kept outside in a wagon. They would shovel the snow off it, make and fire and she would prepare the food. She was 15 years old when her mother died. Adrianna took over the responsibilities of caring for the family. All of this was a hard experience for a young girl. One morning while she was out in the wagon cooking breakfast, one of her brothers spotted some Indians in the distance. When Adrianna saw them, she fell into a heap in the wagon in a dead faint. The Indians rode close by, but didn’t stop or bother them.

She fell in love with the neighbor boy, Albert Bomstad. He had returned from the army, as a cavalryman in Co. B. Second Minnesota Regiment and settled on a farm in East Lake Lillian Township. Albert was 32 years old and she was 17. On the day of their wedding in 1866 the bridal couple and their attendants set out in a lumber wagon with oxen to go about 20 miles over the trackless prairie for the wedding. On the way home they spotted a black bear. 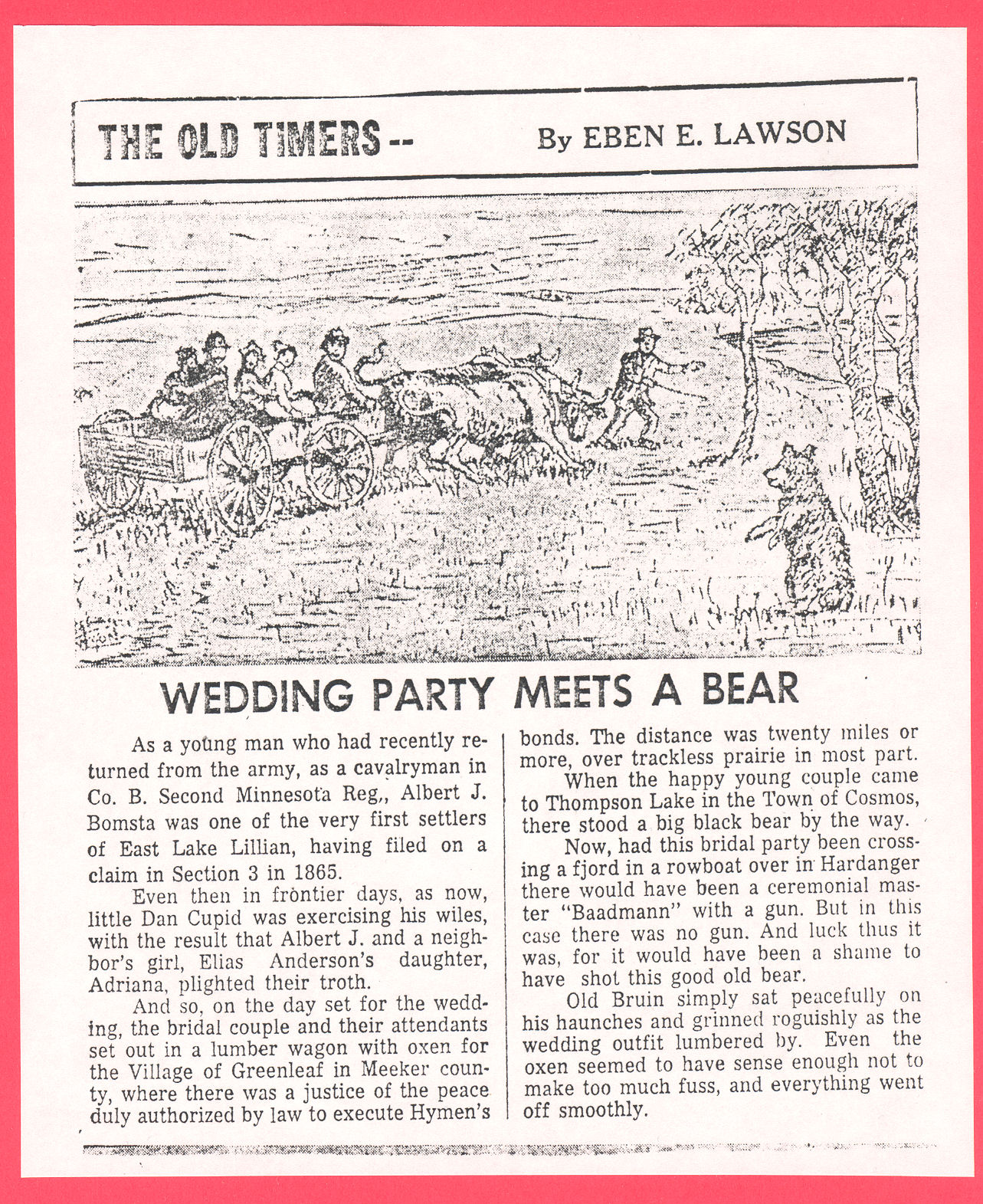 Albert built a log cabin for their first home. They raised seven children on their farm. Albert died in 1894, age 59. Adrianna died on 13 May, 1905, age 56. They are both buried at the East Lake Lillian Baptist Cemetery. 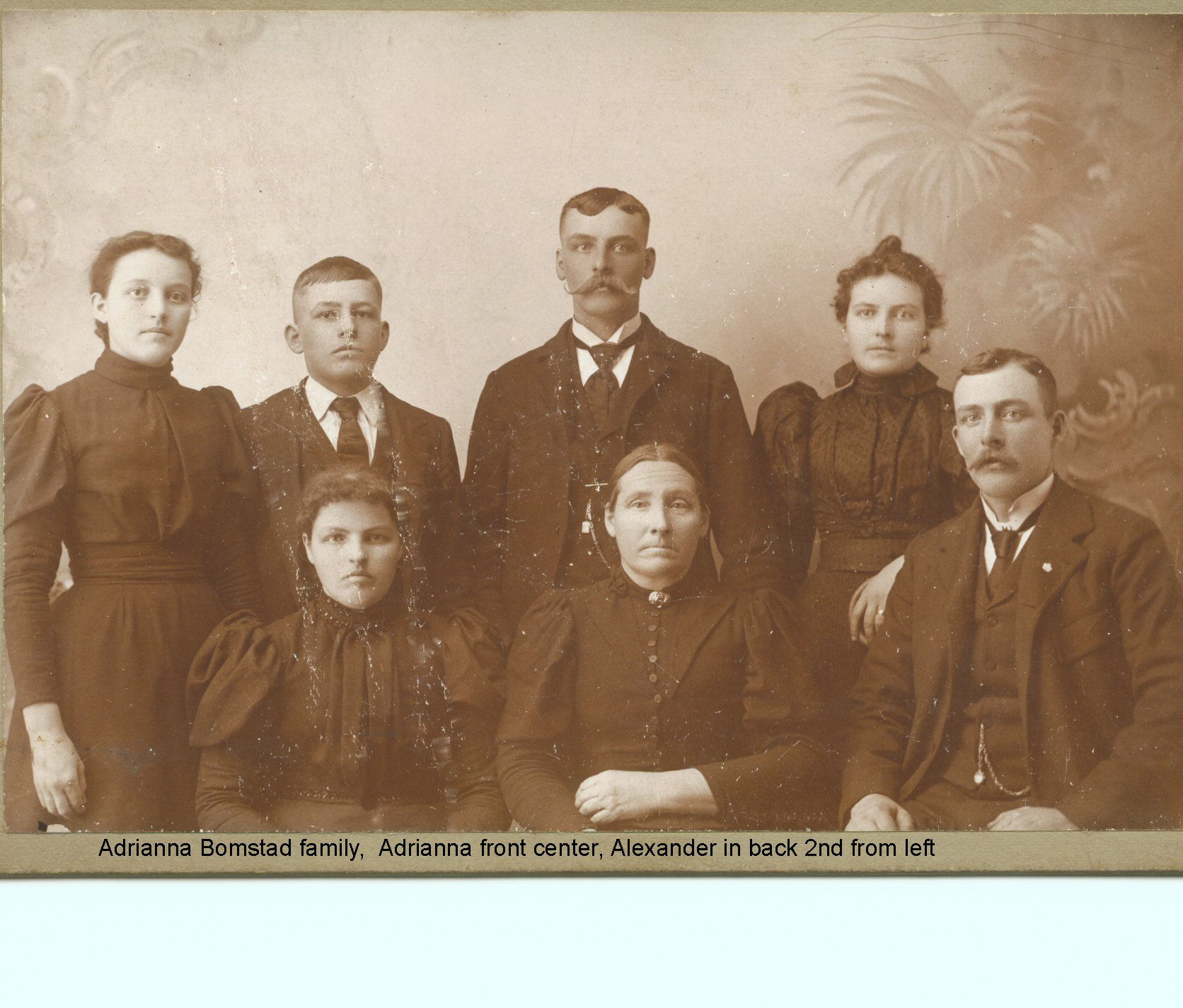 Children of Adrianna and Albert Bomstad:

Mrs. Adriana Bomsta of East Lake Lillian died last Friday at Minneapolis where she had been receiving treatment for several months. Her death was due to cancer which first made its appearance several years ago. Her condition became so serious early in the present year that she decided to go to Minneapolis for treatment. For a time she seemed to improve, but subsequently her condition turned for the worse, and she continued to decline until death occurred last week. While in Minneapolis her sister (Elina Anderson Kraft,) who resides there attended her, and everything possible was done for her. The remains were brought to Atwater on Saturday, and Tuesday were taken to East Lake Lillian for internment. The funeral was held at 2 o'clock in the afternoon, at the Norwegian Baptist church of which deceased was a member, Rev. Borsheim officiating. The funeral was largely attended.

Deceased was a native of Norway, being born there 56 years ago. She came to this country with her parents at an early age and settled first at St. Peter. In 1864, the families moved to East Lake Lillian, and were among the first settlers there. She resided there continuously for a period of forty years. She leaves to mourn the loss three sons and three daughters. The sons are B. E. Bomsta and Asa Bomsta both of East Lake Lillian, and Alex Bomsta of Big Stone County. The daughters are Mrs. Ole Forskognes of the state of Washington, Mrs. Ed Hjort of Kenmare, N. Dakota, and Mrs. Martin Johnson of Big Stone County. She also leaves several brothers and sisters, among them being J. S. Anderson of the town of Gennessee, Andrew E. and Hemming Anderson of Lake Lillian, a sister in Minneapolis and a brother and sister in Montana. Her husband Albert Bomsta died several years ago. The surviving members of the family will have the sympathy of their many friends.

Among those who came from a distance to attend the funeral were Mr. and Mrs. Martin Johnson and Alex Bomsta of Big Stone County.