Story of Elias and Beata Anderson

The Anderson’s home was west of Nordkjosbotn along the south side of the  fjord, at a place called Gammelgård at Tennes. This area was very beautiful  with relatively level but sloping land close to the fjord. 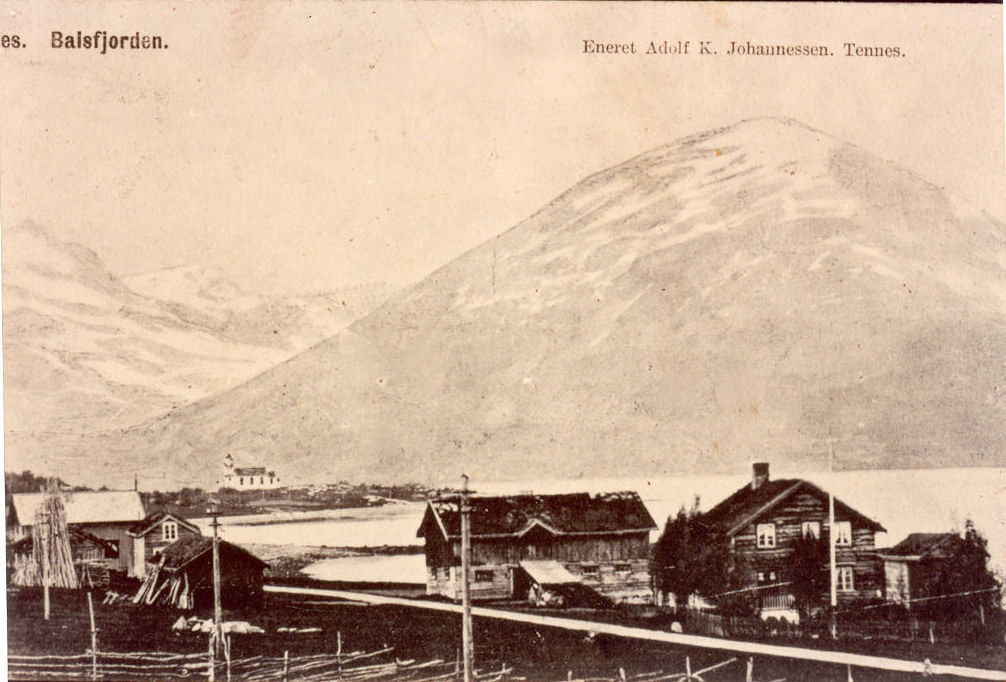 Elias took over the  farm operation after his father died. After several poor years of farming they  were eager to travel to a new land.  Elias and Beata were dissenters from the  State Church of Norway. Elias Anderson and his wife Beata Hemmingsdatter  spent two years preparing for their trip to America. They followed the first  group to leave Balsfjord led by J.A.J. Bomstad who departed in 1862 for  America.  Elias and Beata were expecting a baby born, June 26, 1862 so they had to wait until the next year. They made hand tooled shoes, goatskin robes,  and clothes made of dismal gray homespun fabric. Each family had to bring  enough food to last until they arrived in the new land and consisted of dried fish,  dried mountain berries, meal for gruel, hard tack and flat bread. The food was  packed in large chests.

Balsfjord Church near Tennes just North of the farm. They worshiped here before they dissented from the State Church of Norway 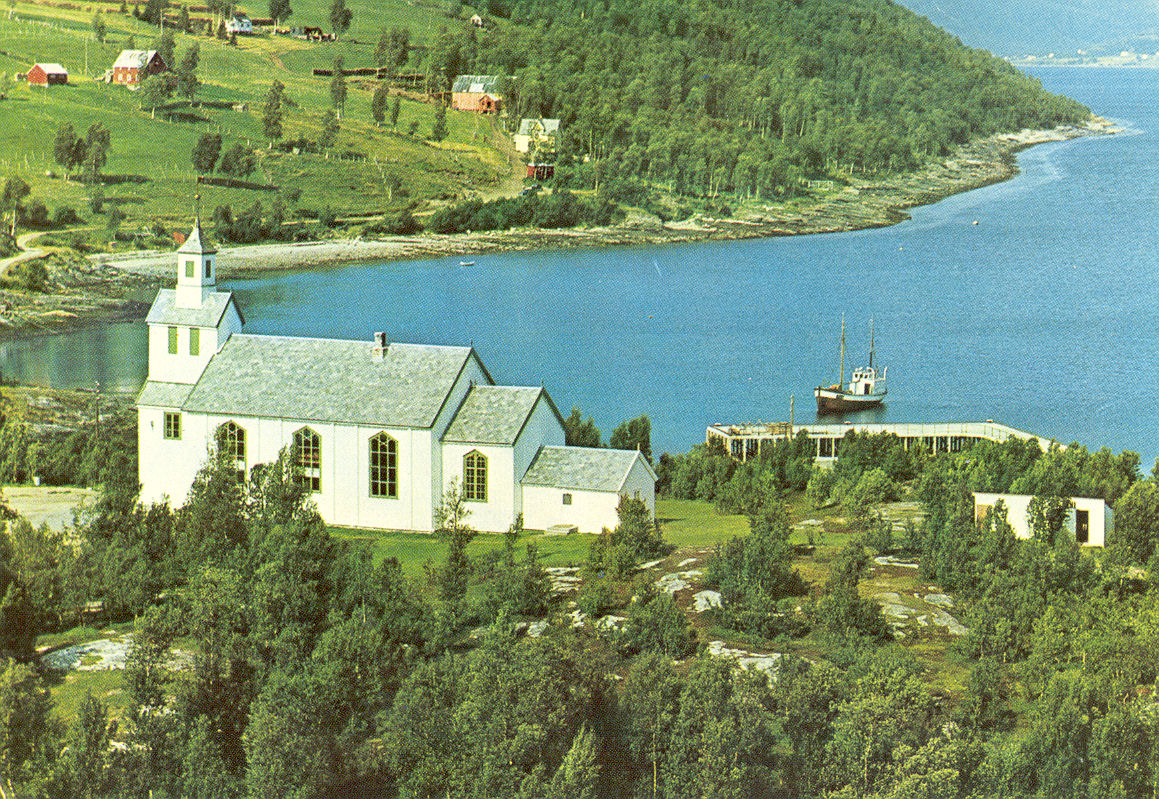 These are 1989 photos of the farm at Tennes 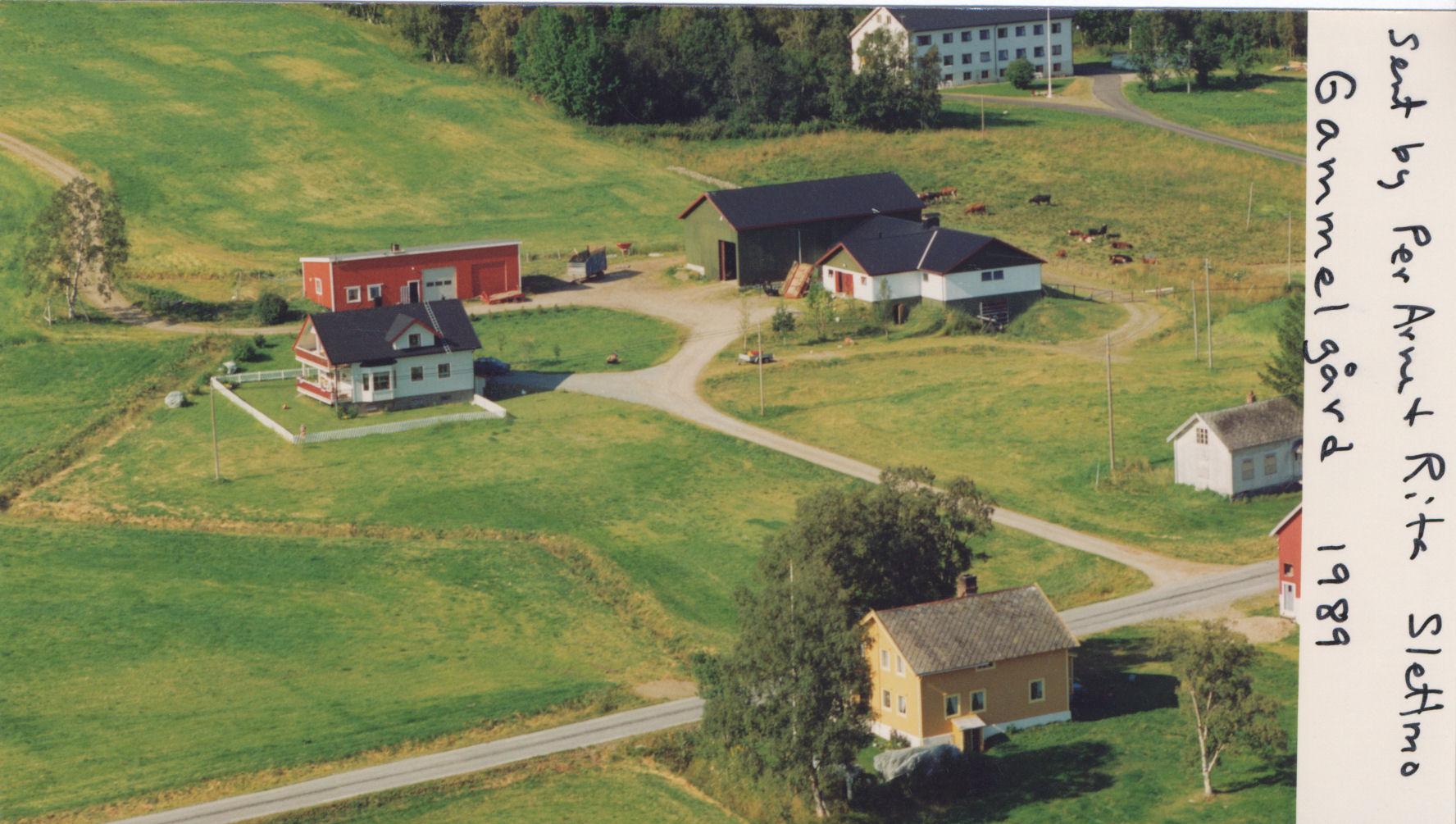 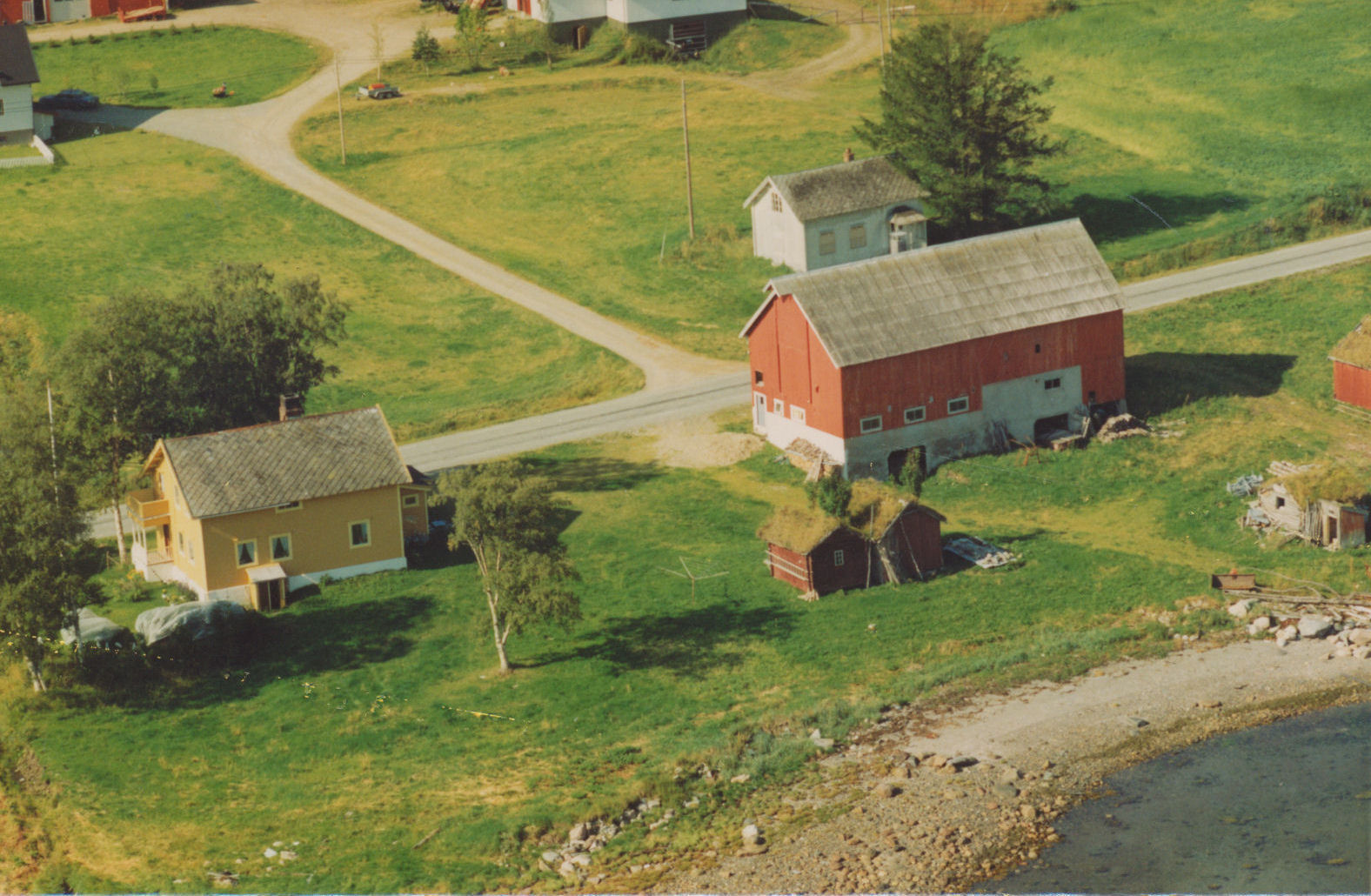 After a long time spent in preparation to go to America, the second group from  Balsfjord was ready to say good-bye to their relatives and friends.

In the  spring of 1863 Elias and Beata Anderson started off on this long journey with  their seven children; Andrew, Adrianna, Hemming, Hannah, Hans Peter, John  and Lena. They also brought Beata's sister's daughter Bertha.  Beata's sister  Adrianna had died in childbirth. This large family traveled to the port city of  Bergen on the west coast of Norway far to the south of Tromsø. The sailing  vessel, which set off from Bergen, Norway, was called the "Sleipner" on its  second journey to America. Four times as many passengers as the Sleipner  could accommodate assembled in Bergen for the sailing.  Because Elias had  a trade of being a carpenter and shipbuilder, his family was able to get on  board. The ship's captain knew that skills such as Elias possessed would be  valuable in the new land. The Sleipner departed from Bergen, Norway on  April 26 with a cargo of herring, salt, tar, and some iron as ballast. She was  carrying 23 cabin and 123 steerage passengers; there was one death on the  voyage. Mastered by Capt. H. Waage she arrived at the quarantine station at  Grosse Île, Quebec, Canada on June 7th. The Sleipner proceeded to Montreal  and from there through the Welland Canal from Lake Ontario to Lake Erie,  just west of Niagara Falls. They arrived in Detroit on July 1st and Chicago  July 6th where they received a 4 gun salute and music by a brass band. 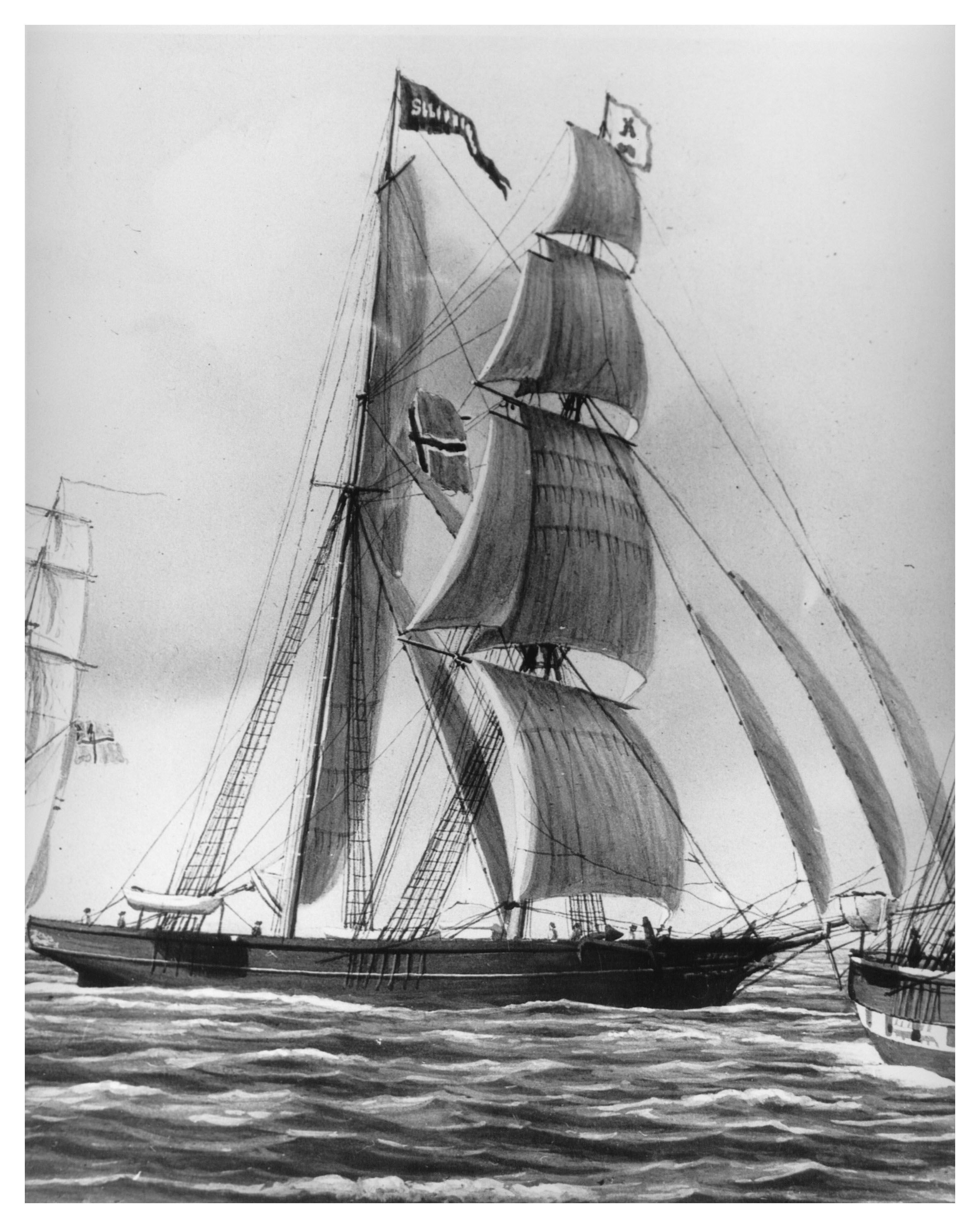 Elias and his family purchased provisions, gear, carts and oxen in Chicago,  Illinois and headed west for Minnesota.

The party arrived in Minnesota just as the Sioux Uprising flared up during  the Civil War. They could go only as far as the Norwegian camp at St. Peter,  Minnesota.  They remained there for more than a year.  With no place to go  and little to do, some of the young men in the party enlisted in the military  service of their new country.  Elias' son, Andrew Eliassen Anderson, served in the Second Regiment Minnesota Cavalry, Company B from  December 16, 1863 -- December 1, 1865.

Andrew Eliassen Anderson and three Bomstas, Henrick, John A. and Albert,  went into the Lake Lillian area on some of their patrols.  They were highly  impressed with what they saw of the area and, on returning to St. Peter, gave glowing reports to the leader of their group, Johan Andreas Johannesen   Bomsta.   When the frontier was at last reopened, J.A.J. Bomsta went to Lake Lillian to  judge the accuracy of the reports for himself.  As impressed with what he saw  as the young scouts had been, he returned to St. Peter to bring his entire party to  the Lake Lillian area in Kandiyohi County, Minnesota.            The Elias Anderson family settled next to J.A.J. Bomsta in the fall of 1864 on land Elias had selected earlier in the summer. The main part of the group had  moved to Lake Lillian in June of 1864, but Elias selected his claim and returned  to St. Peter to take care of the crops on the land he had already rented there.

He came back with his family after harvest.  Their farm was on Sections 5 and 8 of  East Lake Lillian Township. 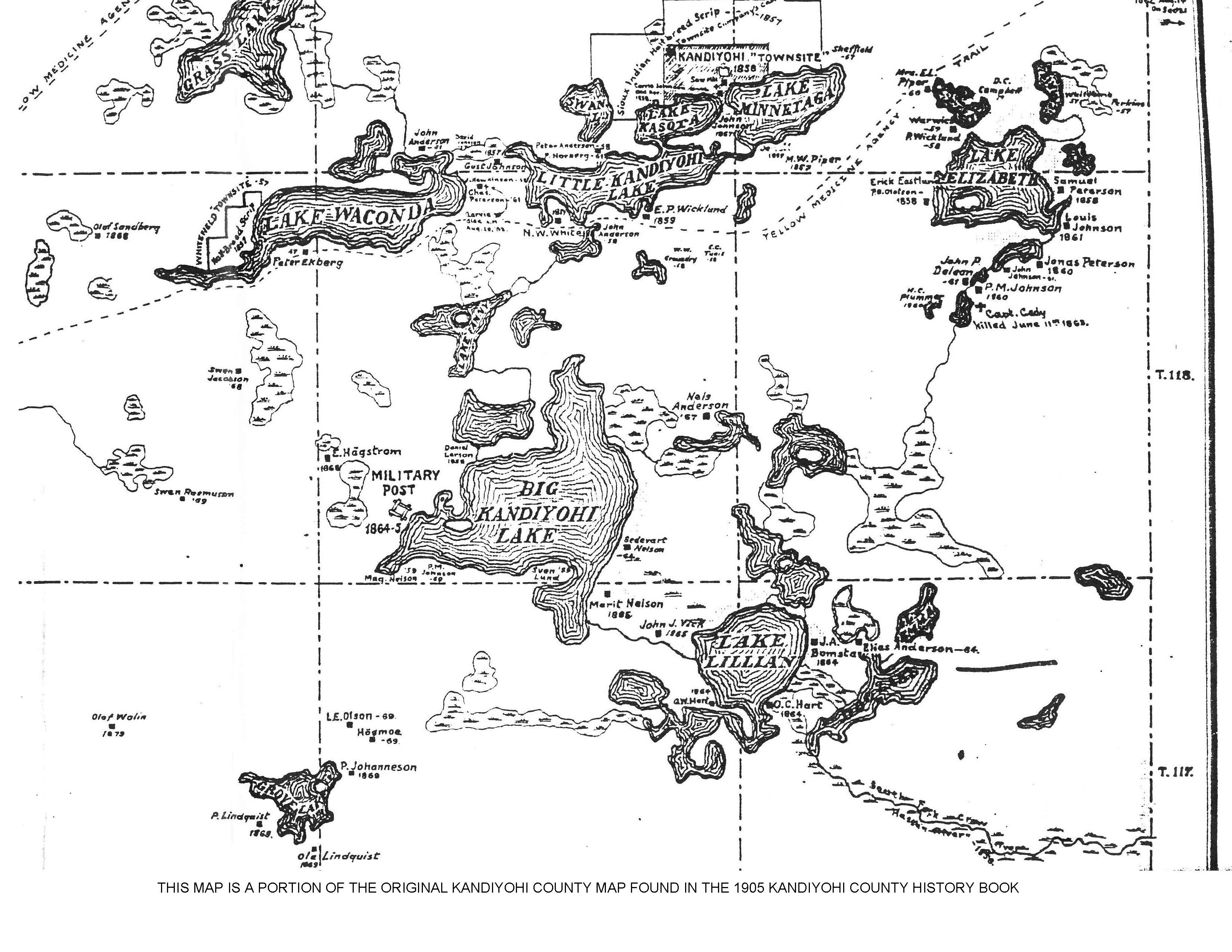 The family moved into a small shack, evidently built  by early trappers.  The shack had a sod roof of which was lined with cambric.  They suffered many hardships. One morning their wooden shack burned to the  ground. Here, on the wild prairie, the settler, with his wife and children, stood  without shelter and with only the clothing and bedding they had managed to save  from the fire.  Elias and his older sons quickly set to work.   They cut some rails,  laid them across two haystacks, made a roof of hay and dry grass.  They improvised  to close up the ends, and made a "house" in which the family had shelter until they  had completed construction of a log house.  This shelter left much to be desired.   The cook stove was still usable, but was located outdoors, because of the danger  of fire.  The oldest daughter, Adrianna, searched through the ashes of the burned  shack looking for cooking utensils and tableware.  The flour sack that contained  the flour had burned away, but they salvaged as much as they could for making  bread, although it had a definite scorched taste. 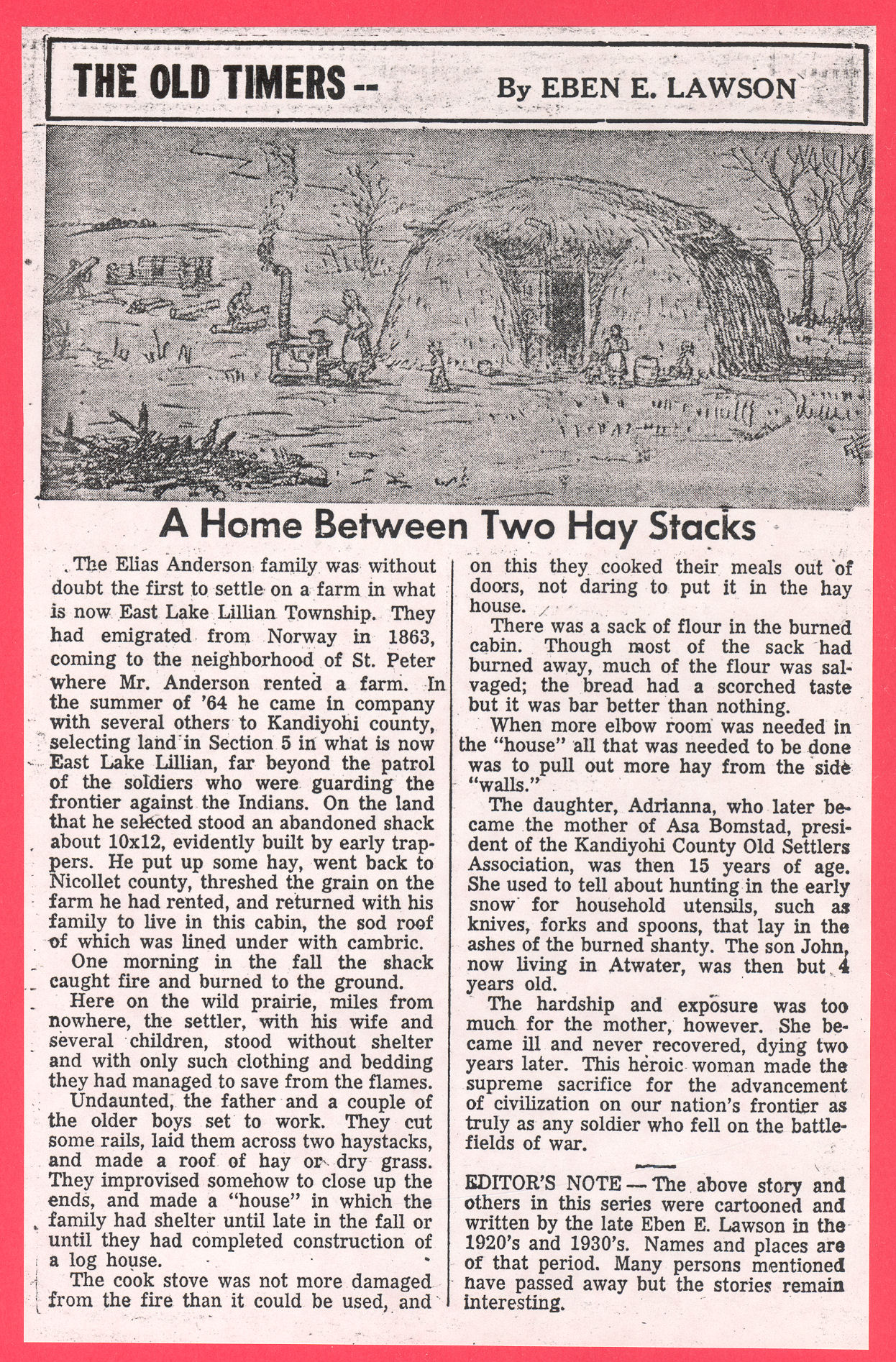 The hardship and exposure was too much for Beata, who became ill and never recovered.  She died from malnutrition and pneumonia in 1865.  She was the first pioneer woman to die in this community.  Beata was buried in a small cemetery in Section 5 for early pioneers. This heroic woman made the supreme sacrifice for the advancement of civilization on our nation's frontier.   After  Beata's death, little Bertha went to live with her father, Hans Hanson and stepmother  who had come to America at a later time and also lived at Lake Lillian.

The Scandinavian Methodist Episcopal Church was (located at section 1 of Lake Elizabeth Township and) organized in 1866 under the  leadership of Rev. H. Holland, a circuit-riding pastor who fanned the spark of  the gospel in this community.  Elias Anderson and three other families constituted  the nucleus of this work.  The first services in the Lake Lillian area were held in  homes and after the schoolhouses were built they were used also.

Elias married for a second time to Gjøyda Owre and they had a daughter, Annie.   In the history accounts it tells about an Indian woman who showed Elias how to  soak and bend beech wood so he could make a hand reaper with teeth.  Elias was  a director of the grade school in 1872.

In 1873 there was a severe blizzard that  lasted for three days.  Elias worked unceasingly hard caring for his own oxen plus  his neighbors also brought their oxen to his shelter.  He struggled through the snow and wind to care for these animals.  In those days oxen were hard to get and they  were very important for the survival of the pioneers.  He had trouble getting enough  hay and water for the oxen.  Working under these difficult conditions weakened Elias causing him to get pneumonia.  He died at the age of 49 on February 4, 1873.   He was buried at the Pioneers Union Cemetery north of Lake Lillian. 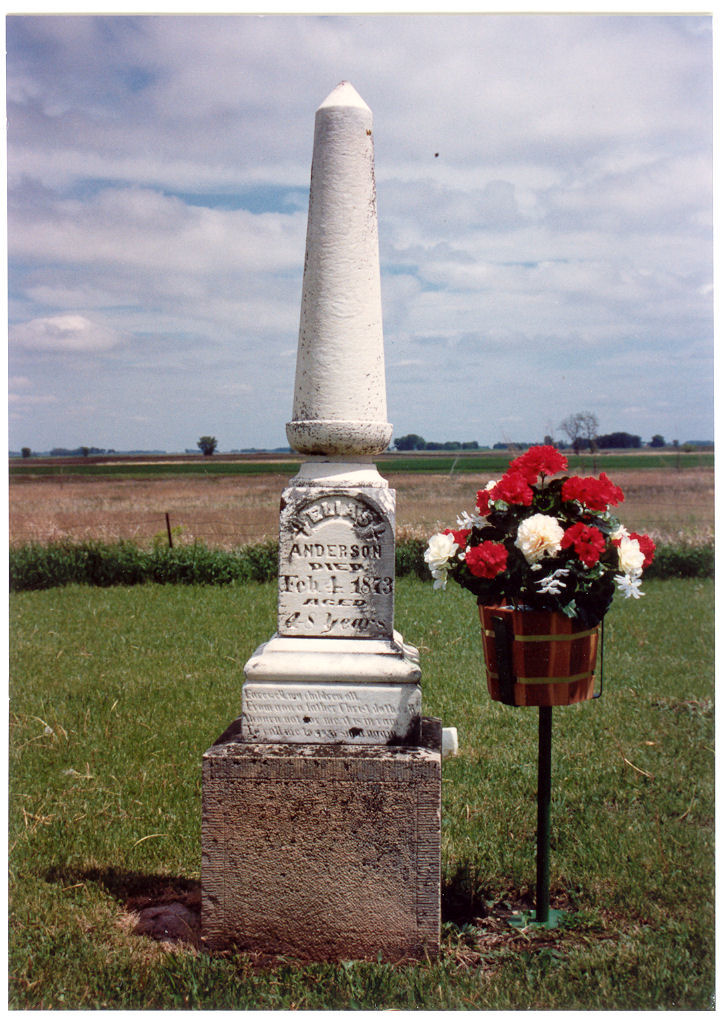 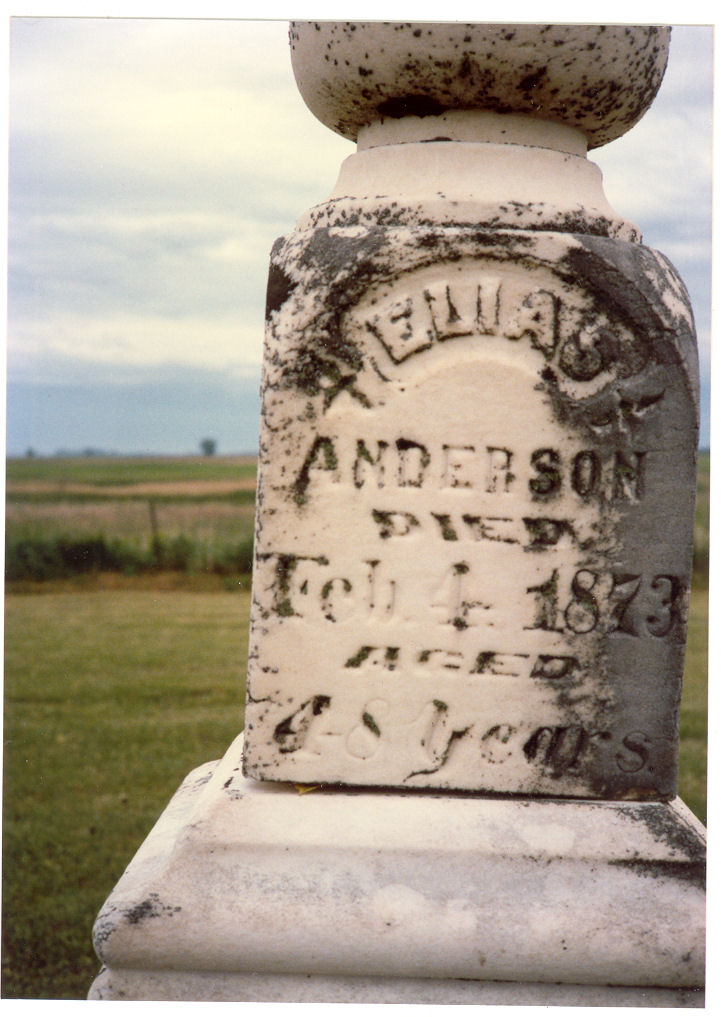 After Elias died, his son, Hemming Anderson, took over the farm.  Hemming  donated land (in 1890) for the Methodist Church and Cemetery (that was built in East Lake Lillian section 5).  Another son, Andrew Anderson,  donated the original parsonage. 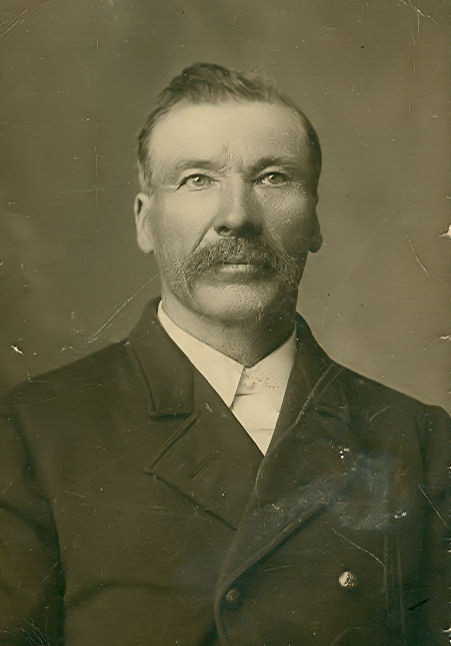 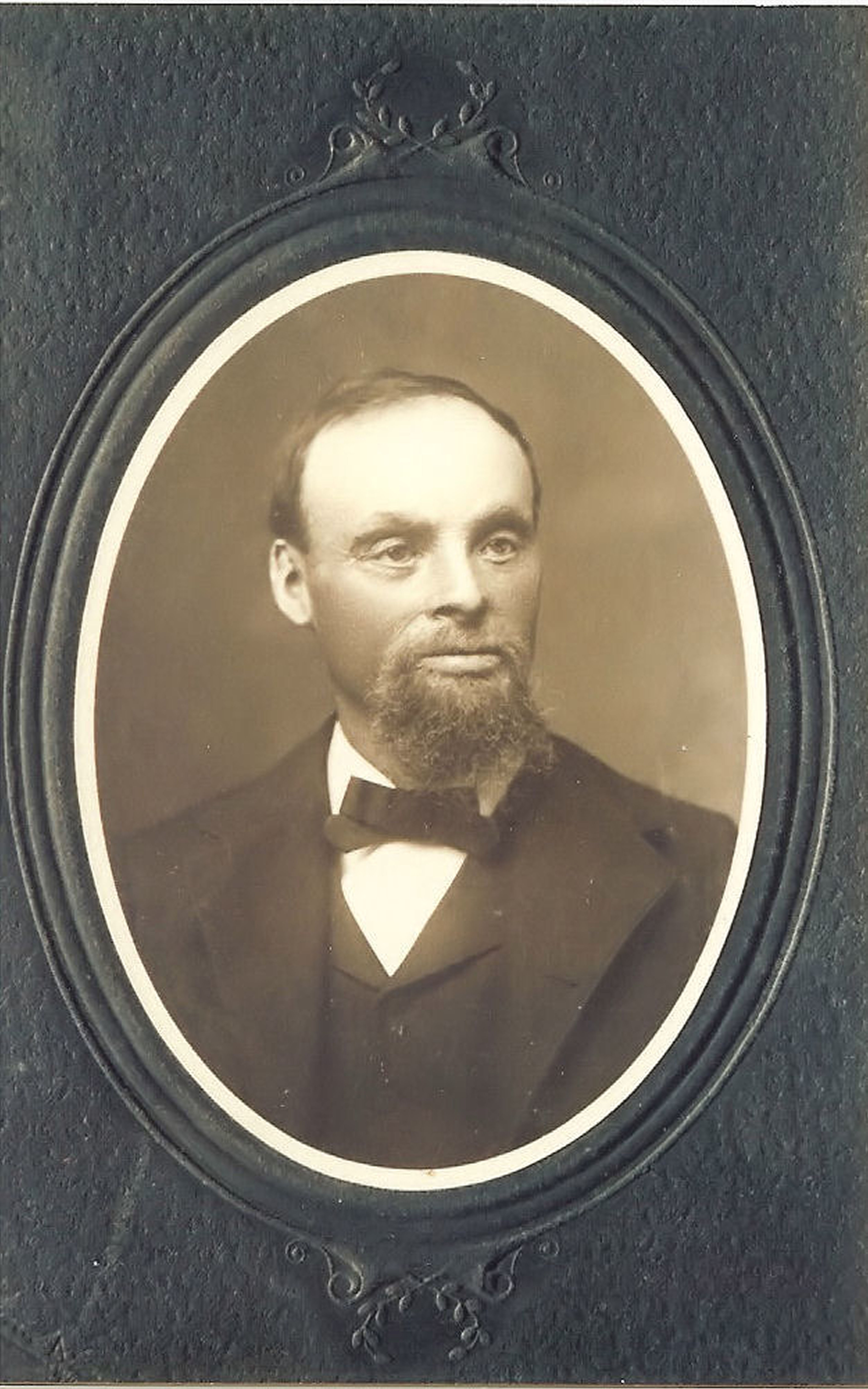 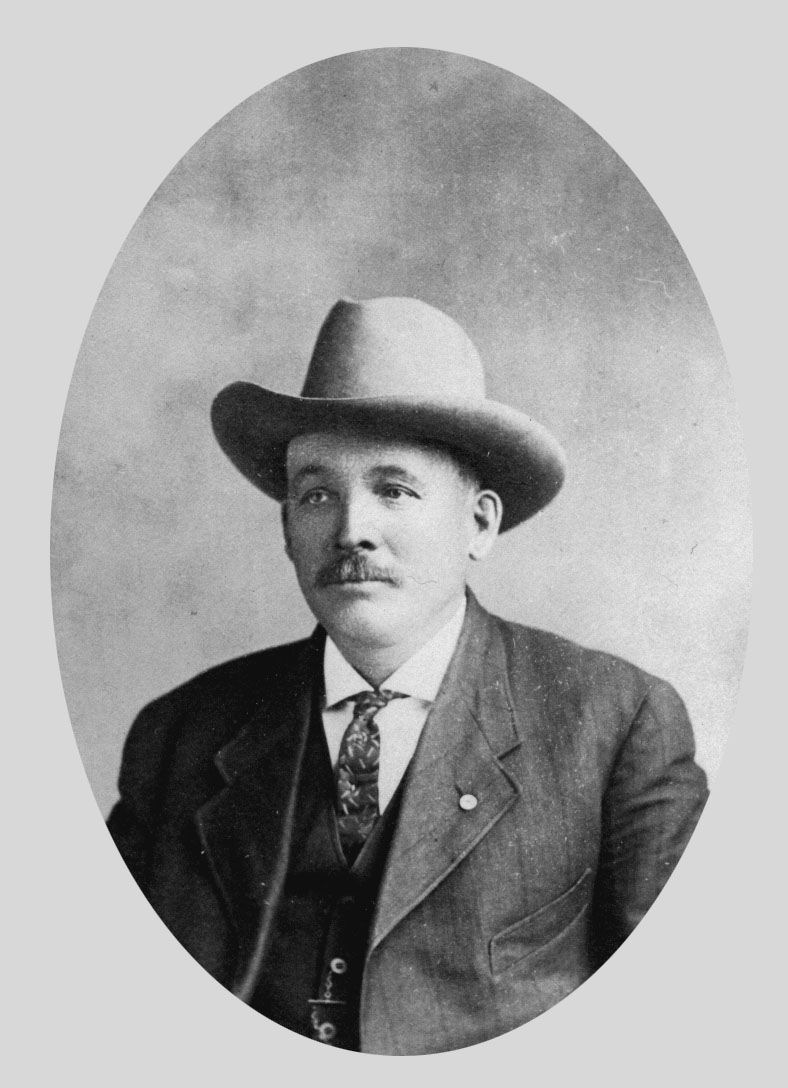 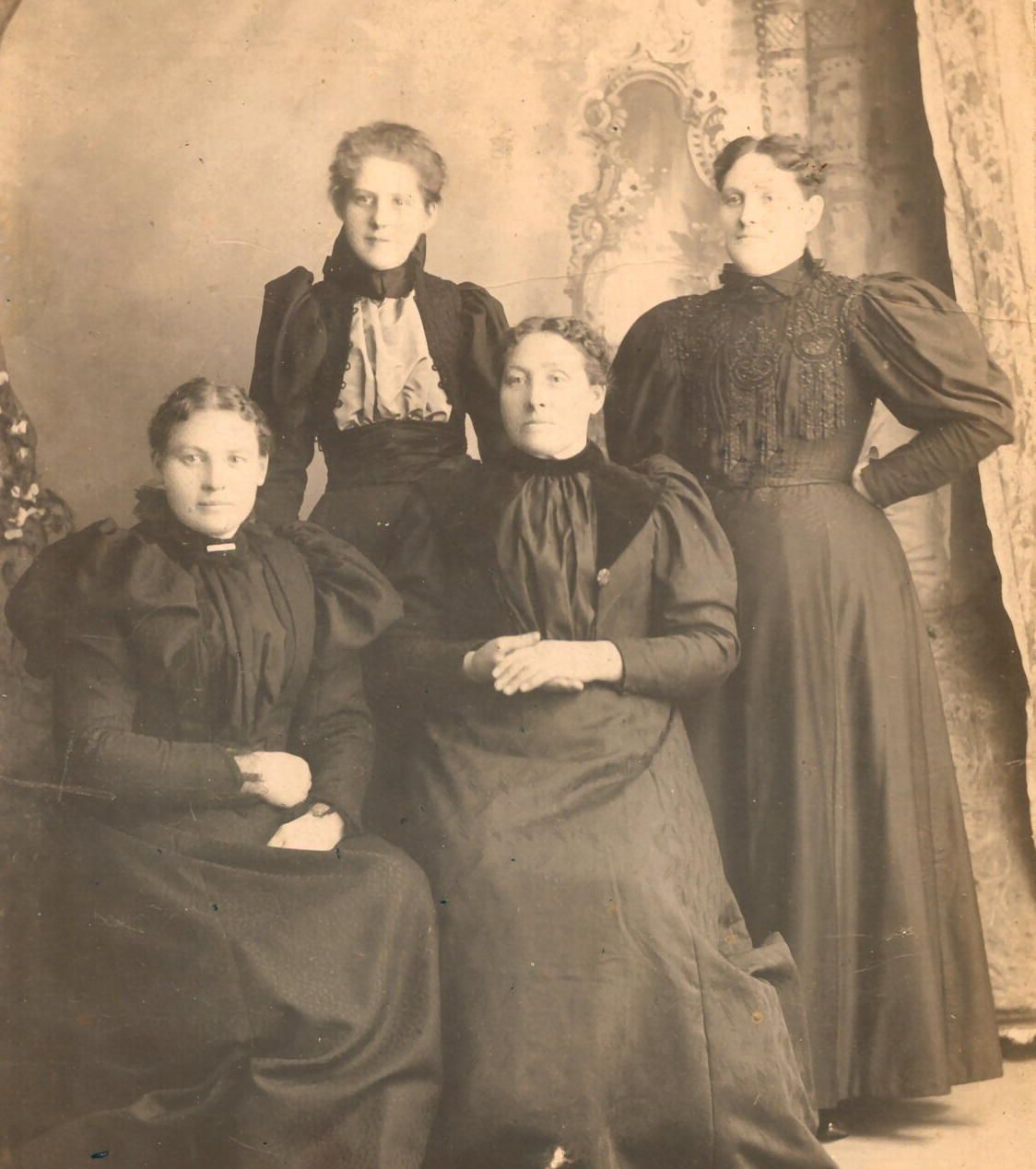 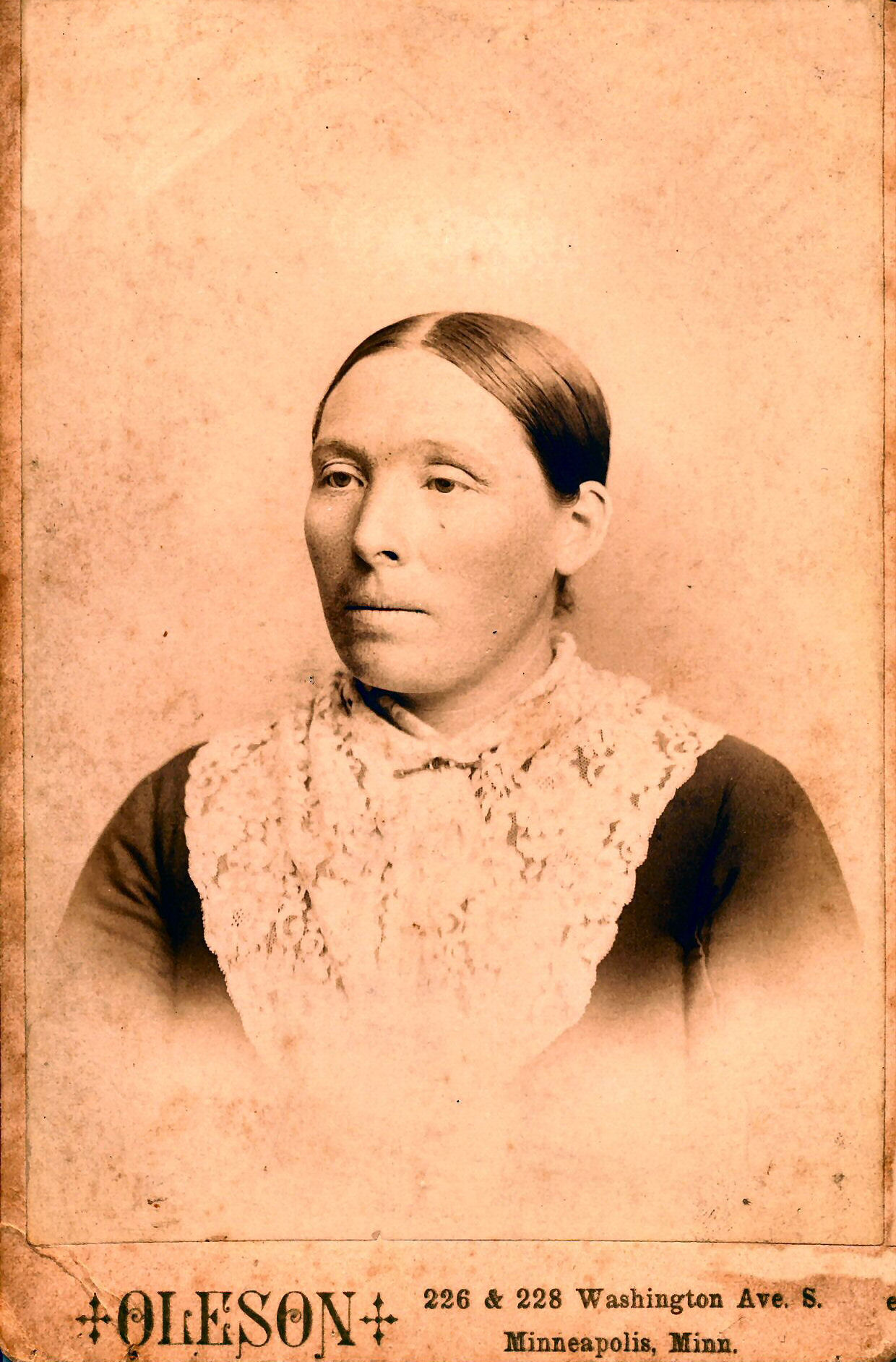 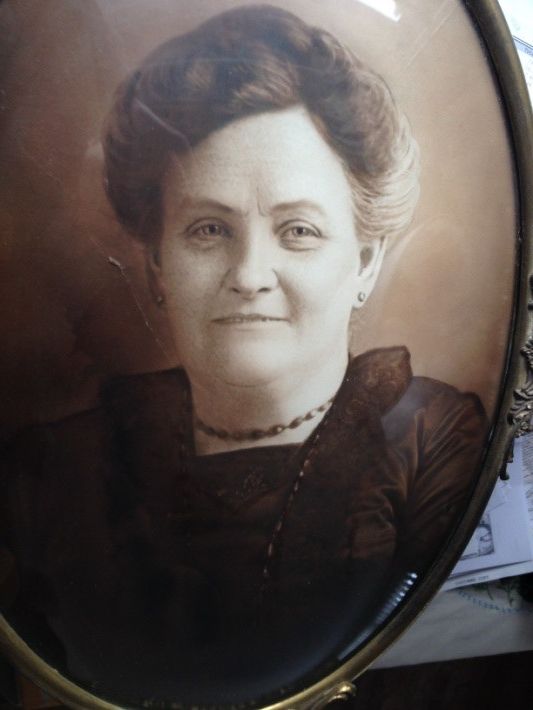