The town of Thorpe was located 2 miles east of Lake Lillian just south of MN #7 until 1923 when the railroad came to Lake Lillian.

I am not sure of the direction of view. I think the photo was taken from the south looking North. Let me know if you know. At that time Thorpe had some houses, a bank, post office, a feed mill, a creamery, ice house, a blacksmith shop, a garage, E. J Strom's grocery store and some barns and chicken coops.

That house would be more than 89 years old now. Several other houses were moved from Thorpe. Do you know which ones? Do they survive today?

I didn't know Hans but he was important to LL History. Hans started as a blacksmith and became an electrician. He wired the Leo Gauer house on section 15 East LL in December of 1936 just in time to light the Christmas tree for 3 of my older cousins to enjoy.

Hans and Olga had 8 children. The family found job opportunities and 6 of them settled in the expanding town of LL. Art operated a tank truck for farm delivery of oil and fuel. Clarence became the blacksmith. Kenneth was a mechanic. Hazel married Carl Erickson and they operated a restaurant, Vany married Stansie Swenson who had the road patrol grader. Harvey continued the electrical and plumbing contracting business that is operated today by his son Lowell.

Olga was a step daughter of Hans Pete Hanson from Norway and east LL. Many Lake Lillian people were related to that family. Hans Pete Hanson's brother, Anton Hanson, was married to Gunhilda Sebulonsen who was a sister to my grandmother Halfrida, Mrs August Erickson. Today all these connections come to mind that I just was not aware of or interested in when I was still living in LL with my parents in 1957.

This view of LL appears to be taken from the bell tower of the First Lutheran church after 1925. 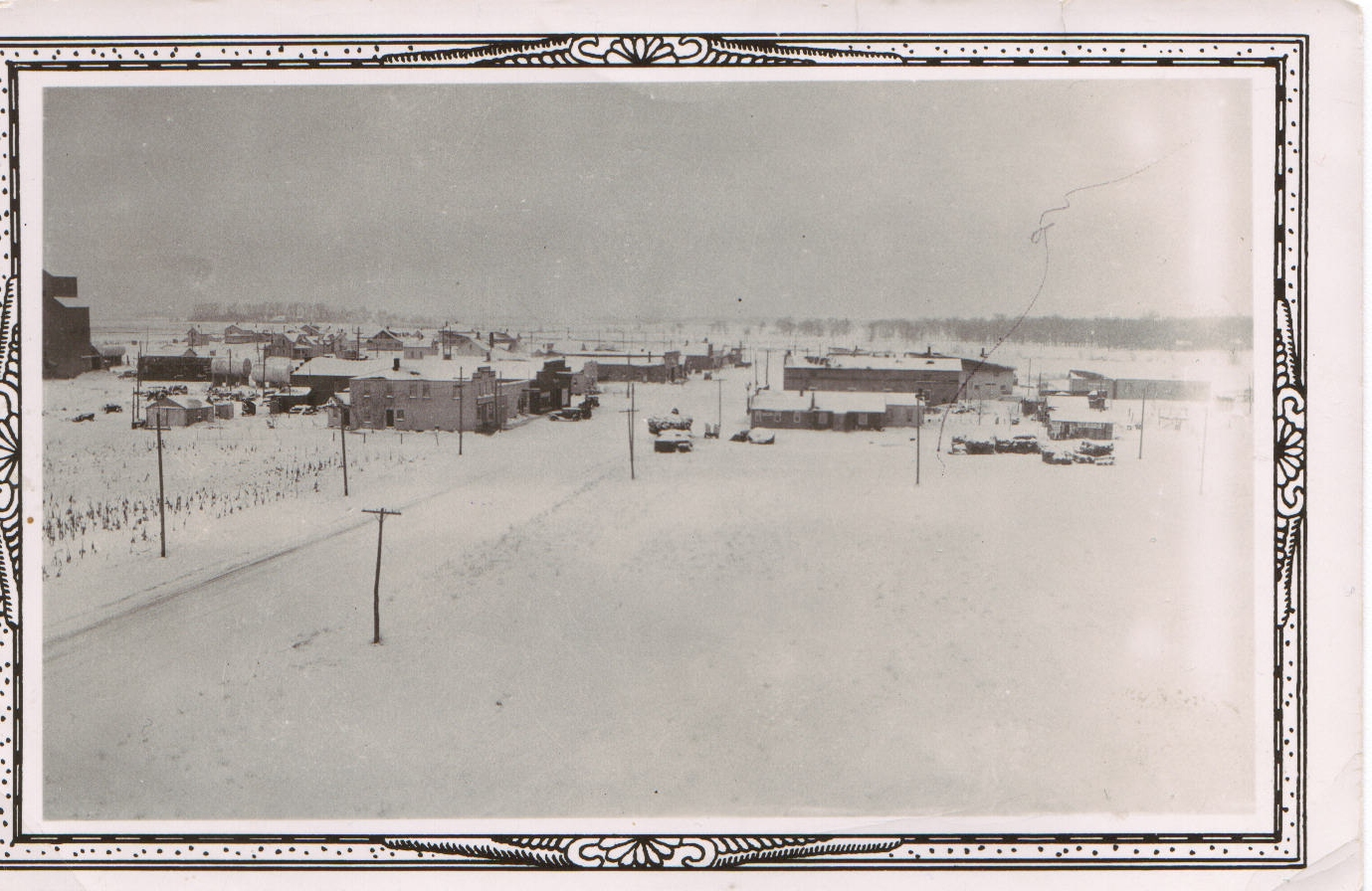 The first Ford Garage burned in 1925. Note that the Albert and Edna Johnson Hardware store building on the east side of the main street, where Maynard's store is today, is the one that was destroyed by fire in 1946. North of that is the bus garage. A Catholic Church and Denning Produce burned in 1941. The Lars Erickson store on the west side of the main street opened in 1924 and was operated by Ray Erickson before it burned in 1972. The wooden Farmers Elevator buildings burned in 1931 and again in about 1950. Other fires over the years happened at the Lake Lillian garage and machine shop where Petterson Electric is now and at Flann hardware and the Hemp plant North on Number 8. There is more detail in The Anderson Sisters books by Wendell Lundquist. Today, Lake Lillian enjoys a very modern and prominent fire department building in the center of town. 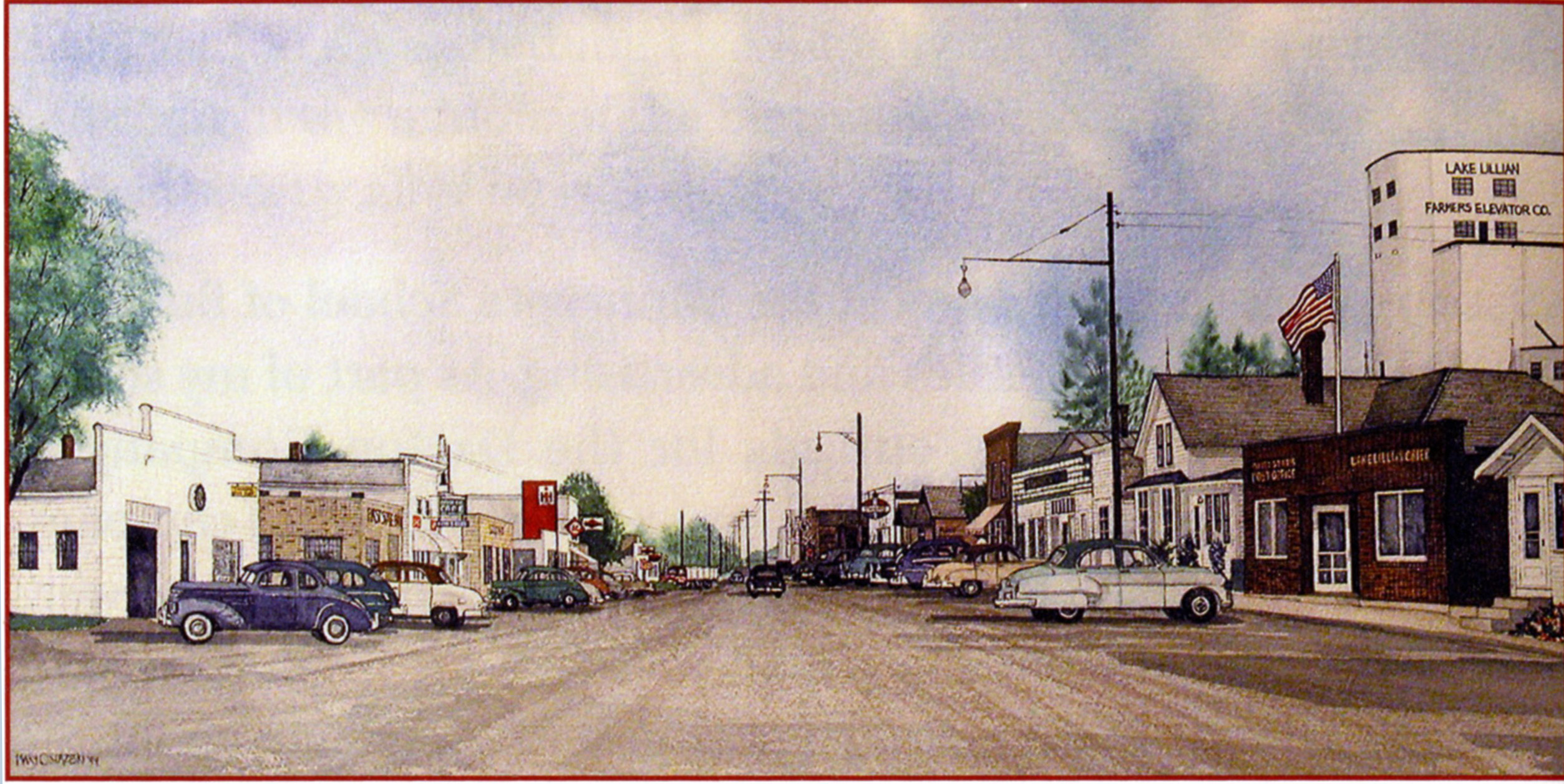 This main street view was copied from Glen R. Johnson's recent book "A Matter of Trust" and is used here with permission of Glen and LaVonne.

The Auto body shop of Thurman Sagness was located just south of where the new library is now. Next, after the bank, is a café that was operated by Carl and Hazel Erickson in the 40's. Hidden beyond that is Albert Nelson's produce. After the Petterson Building we see the red block IH sign that was characteristic of the Farmall Tractor and International Harvester dealerships of that era. Harry Nordin also developed that business into an automobile dealership with Plymouth and Desoto cars from Chrysler Corporation. Some of those models had push button operated transmissions. The last Desoto was made in November 1960. I don't remember if he had Dodge and Chrysler cars. I suppose that the ad pages of the Lake Lillian Crier would answer that question. The building has been remodeled several times and now houses the Community Center. Note the E J Strom grocery on the West side of the street. The Butcher shop building south of that was used later as a municipal liquor store.