revised September 8 2016
Now revised with December 1913 detail and wedding photos of Fred and Amy.
Also added is a segment about Sigvarda Hanson who died in childbirth on Feb 9 1913.

The not so Good Old Days

Medical care of 100 years ago was primitive and inadequate. Remember that Penicillin was not available until 1944. This article is a bit sad and remembers family and Lake Lillian people who died from Septicemia, Diphtheria, Bronchitis, Pneumonia, Influenza, and Appendicitis.

Matt and Lena Gauer had 13 children and 5 died early in life. Four died as babies or toddlers but (my uncle) Fred was six when he died in 1911. The following story was lost with that generation and re-learned by my generation in 2008.

Uncle Fred was brother of Rose, Elizabeth, Clarence, Lillian, Leo, Glen, Otto, and Eleanor, His death certificate notes that he died of septicemia 7 days after injuring his knee in a fall on the ice.

These notes were in The Bird Island Union issue of Dec 7 1911 under the local news section heading of Osceola Blizzards and The Atwater Republican Press issued on Friday Dec 15 1911 in the Country Correspondence East Lake Lillian section dated Dec 12:

Dec 7 1911 BIU / Osceola Blizzards
Mr. and Mrs. Matt Gauer's seven year old boy died Tuesday. The funeral will be held from the Church of Hope. We sympathize with the bereaved parents
Dec 15 1911 ARP / ELL
"The funeral of Mr. Gauer's son Freddie which was to take place last Tues, the 5th, was postponed until Wednesday on account of signs of life."

(Read that last one again if you must.)

The church of Hope was in Section 15, Osceola Township, Renville County and exactly 6 miles south (by helicopter) of the Gauer place on Section 15, East Lake Lillian Township, Kandiyohi County. The church building was built in 1910 and the last service there was in 1990. The building is gone but the cemetery at the site is well maintained by an association of former members. The church was affiliated initially with the Evangelical Association, later with the Evangelical United Brethren and eventually became the United Methodist Church of Hope. 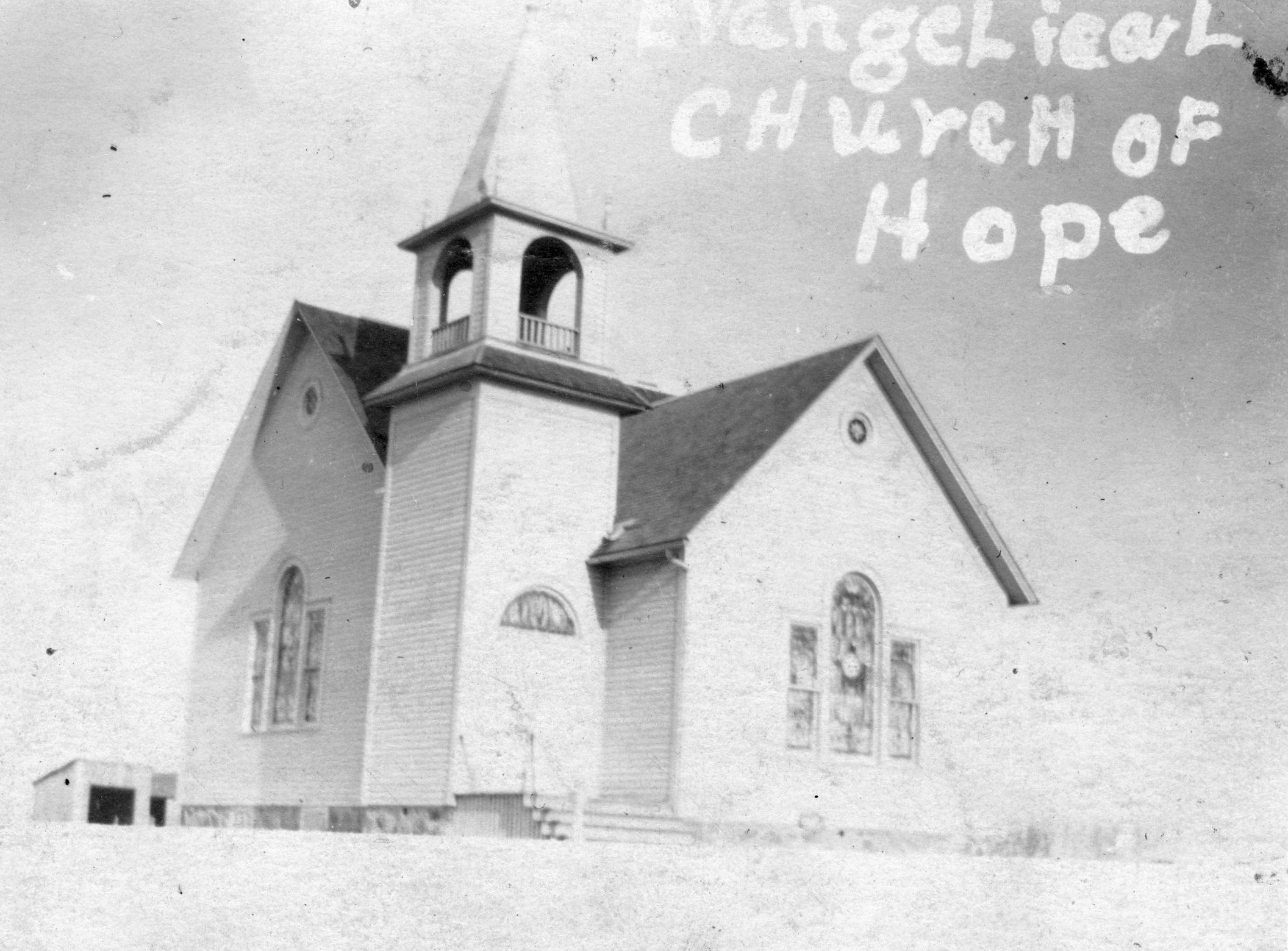 The Church of Hope is pictured as it was in 1984. The site is located on the SW corner of section 15 Osceola Township.

Fred was the 4th person buried at the cemetery. The plot map shows the Gauer grave at plot #14 grave location #1; but there was no marker there until when we and my cousins placed it in 2010.

Matt and Lena lived in East Lake Lillian Township at the time of Fred's death. My dad, Otto was less than 3 at the time and Eleanor was 7 months old. The family had moved up from Iowa to East LL in 1900 and purchased 80 acres in the S 1/2 of the NW 1/4 of Section 23. They kept that 80 and in 1906 rented land nearby in the SE 1/4 of section 14. In 1907 or 1908 they rented a farm in Osceola Township. We do not know where but it may have been near a town called Cream City which was located in section 14. It had a creamery, a school, District #90, and a general store with a lean to addition for a recreation center and hall. The general store burned down on July 5, 1907 and it was not rebuilt. My dad was born Jan 2, 1909 in Osceola Township. Baby girl, Frances, died at 2 months and 25 days on 24 June 1910 of capillary bronchitis. The 120 acre place on section 15, East Lake Lillian was purchased on 28 September 1910. Matt moved his house from the old farm to the new place as noted in the Republican Press issues of Feb 10 and Mar 3, 1911.

Matt and Lena had 2 babies die before Fred was born and 2 after. Lena had a stroke in 1920 and died 3 years later in 1923 at the age of 54. Matt was 59 when he died in 1923. The family had been Presbyterian in Iowa and attended the East LL Norwegian Baptist church less than 2 miles from the farm sometime after Fred died and after English services became common.

Fred's generation is now all gone and we can not ask if anyone ever visited the gravesite. Aunt Lillian wrote of Freddie in her memoirs that he liked to sing. My brothers and cousins remember nothing of the Church of Hope and its cemetery. St John's Lutheran Church is located 2 miles South of The Church of Hope. Services at both churches were in the German language in the early 1900s.

Sigvarda was Mrs Nicholas Hanson from Tromso Norway and a sister to my grandmother Halfrida. Note that the country correspondents did not publish the fact that Sigvarda's fourth child was born the day that his mother died.

Feb 17 1913 ARP / Cosmos
Mrs Nicholas Anderson (note wrong name published) died last Sunday at the age of 35 years, 5 months and 25 days. She leaves 4 children, 2 boys and 2 girls, the oldest being 14 years. She has 3 sisters in this country to mourn her death - one in Chicago, Mrs Anton Hanson of Dakota and Mrs August Erickson of Lake Lillian. She was buried in the Baptist Church cemetery last Thursday about 2 O'clock.
Feb 13 1913 BIU / County Line Buzzings
The many friends and relatives were shocked to hear of the sudden death of Mrs Nicholas Hanson Sunday Morning. The deceased leaves a husband and four children to mourn the loss of a kind and affectionate wife and mother.

Fred and Amy were married on Tuesday, Dec 9 1913. We think that the attendants were Amy's brother Allie and sister Ella. The license witness was her sister Hilda.

Dec 15 1913 ARP / Cosmos
Fred Holmgren traded off his old cook last Tuesday. Mr Holmgren and Miss Amy Anderstrom went before the clerk of court in Willmar and asked for a marriage license, which was duly granted. Since that they went to a person who was duly quallified to unite them as man and wife. They passed the next day at Willmar sight-seeing, and later went to Minneapolis to pass their honeymoon. Now, boys, what is wrong in finding all the old cowbells in the neighborhood. We'll join in congratulation and wish them success in life. They now have leased the farm of Mrs. John M. Carlson for a number of years.
Mrs John M. Carlson will have an auction sale the 19th of Dec., which will be one of the largest in the vicinity. She is to move to her mother's Mrs. Trogen of West Lake Lillian, and Mr and Mrs Holmgren will take possession of the farm at once.
Dec 19 1913 ARP / ELL
Fred Holmgren, a popular young man and son of Mr and Mrs John Holmgren took unto himself a wife by the name of Amy Anderstrom, a well liked young lady among the people of East Lake Lillian and daughter of Mr and Mrs Pete Anderstrom. They were married at Willmar Tuesday of last week by Rev R.C. Todd. Mr and Mrs Holmgren returned to the Anderstrom home, where they will remain til after Mrs. Betsy Carlson's sale. The happy couple was tendered a well-planned surprise by the young people of the town. They received many costly presents. Congratulations go out to the newly-weds from this correspondent and we wish them much happiness.
Mar 13 1914 ARP
Obituary .. Fred Holmgren, after a brief illness, from Diphtheria... Fred Holmgren passed away as a victim of that dread disease at his home in East Lake Lillian on Wednesday morning at 5:40. Deceased had been married only 3 months and this sudden bereavement comes as a very hard blow to the young wife who survives him. He was born June 2 1892, so consequently was not quite 22 years of age. Besides the widow who survives him, the nearest relatives are his parents, Mr and Mrs John Holmgren, well known residents of East Lake Lillian and four brothers. A large circle of friends will also regret to learn of his untimely death. Deceased was a member of the Yeoman Lodge here and carried insurance in that order, which will help provide for the surviving widow. The burial took place in the Norwegian Baptist Church Cemetery on Wednesday afternoon at 5 O'clock, Rev Jacobson officiating. The grief stricken wife has the sympathy of all in the affliction which has befallen her.

Amy went on to a long life as a widow and midwife to many in East LL. She married a widower named Hans Erickson in 1943. Hans died in 1959 and he is buried next to his first wife at Green Lake Lutheran cemetery. Amy was almost 100 years old when she died in 1993 and is buried at the East LL Baptist cemetery next to Fred. Fred's monument is incorrect as it shows 1913 and it should be 1914. I did not know Amy but many of my older cousins speak fondly of her. Amy was sibling to Allie Anderstrom who married my aunt Lillian and Esther Anderstrom who married Uncle Glen Gauer.. 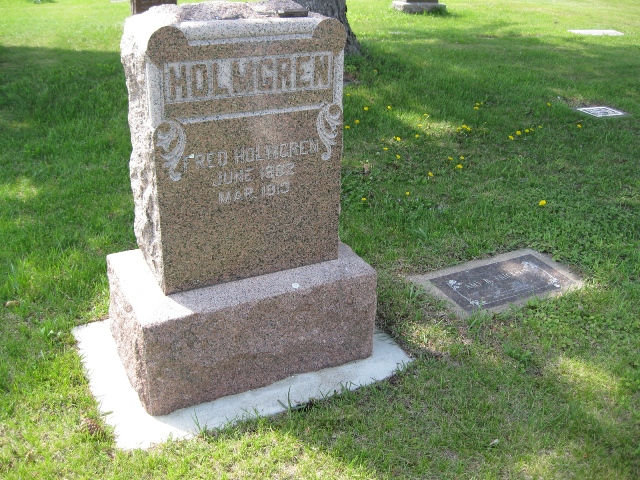 Nov 1 1918 ARP / Notice
NO PUBLIC FUNERALS Regulation 220, passed by the State Board of Health at it meeting of Oct 21st prohibits public gatherings. In accordance with this regulation from this date forward until further notice all funerals are considered public gatherings and must be private. This applies to deaths occurring locally, from any cause, or bodies brought into the state for burial. H.M Bracken, Executive Officer
Nov 15 1918 ARP / Headlines
THE WORLD WAR HAS ENDED
Nov 22 1918 ARP
Ban will be lifted Monday. The influenza ban which has been on for 5 or 6 weeks will be ......
Dec 27 1918 ARP / Front Page
Ingebright Johnson family loses mother and son within two weeks from pneumonia.
Jan 3 1919 ARP
The board of health and the village council have consented to allow the churches to open for service Sunday January 5th and the public school Monday January 6th. No places of amusements, however or public gatherings of any kind will be allowed until further notice
/Cosmos/
Quite a number around Thorp have the flu. The Matt Gauer family is down with the influenza. Mrs. Cedarburg is employed as a nurse.
Jan 10 1919 ARP
Chester M Johnson, son of Ingebright Johnson of Lake Lillian was born August 1 1892, took ill with influenza December 12, but seemed to recover so that he could be up until December 28, when a sudden relapse came and after great suffering passed away January 4th at 4 p.m. The family and friends are grief stricken beyond words as this is the third death in the home within the last three weeks. Internment was made in the Baptist Cemetery in Lake Lillian, Rev D.R. Largergen officiating.

Small Pox Quarantines / as recalled by my late aunt Eleanor.

Eleanor's sister Elizabeth went out to Meadow SD to help the family that was left after their cousin Mabel died in 1916. Mabel was 22 and left two young children, Alvin and Neoma, and a husband, Roy Watson a widower. Neoma and Eleanor were the same age.

Elizabeth brought Neoma home to East Lake Lillian with her one summer and Neoma came down with the small pox which she must have picked up on the train. I don't remember being very sick but some of the family were very sick and it was harvest time. We were quarantined for many weeks. Groceries had to be delivered and dropped out by a tree. There was no way we could let Roy know. So after several weeks we drove miles to mail a letter in a country mail box after steaming it to sterilize it. Later, in 1919, Elizabeth and Roy were married.

Irene Alice Erickson 5 yrs old and sister of my mother Jeanette died May 8 1921 of appendicitis after 4 days in the Willmar Hospital. Irene's marker is in the northwest corner of the Christina Cemetery and does not show her family name. Her sister Dolores Erickson Kienholz Behrendt was buried next to her in 2007.

Today, we are thankful that modern medicine has achieved a measure of control over many of the dread diseases of the past.

Perhaps a future article will chronicle some of the better times of the past.