The first permanent settlers in Lake Lillian came from Tromsø Norway and arrived in 1864. Tromsø is surrounded by fjords, near the polar sea, above the Arctic Circle and warmed by the Gulf Stream.

My grandmother Frida was one of 4 Sebulonsen sisters who emigrated separately from Tromsø Norway and arrived in East Lake Lillian, MN in the years from 1897 to 1910. They were the daughters of a sea captain and small farmer named Ludvig Sebulonsen and his wife Anna who lived along the east side of the Balsfjord at a place called Andersdal, just south of the island city of Tromsø.

He was an Arctic explorer and one of two Norwegian sealing captains, Johannes Nilsen and Ludvig Bernard Sebulonsen who discovered Victoria Island on 20 July 1898.

Ludvig Bernhard Sebulonsen born 25 November 1846 in Andersdal in Ramfjord. He started sailing as a cook on the bank fishing. The first ishavsturen was in 1864 with the quest "Elise." The following three years of pursuit "Haabet" and as harpoons with the latter vessels over the next six years. In 1876-78 he traveled with different vessels. In 1879, he traveled with the sloop "polar bear" who was hired by English gentlemen.

In 1883 led Sebulonsen schooner "Andenes" and in 1884 the quest "Elida" which he had a part in. Later, Sebulonsen "Lykkens try", which he owned together with consul A. Aagaard. This vessel was in 1904 sold to Russia. In 1906 Sebulonsen islos with the Prince of Monaco. In 1907 harpoons with D / S "Victoria". Sebulonsen stopped ishavsfarten in 1916.

Ludvig was married on 28 October 1870 with Anne Margrethe. The couple had nine children, five boys and four girls. 2 of the sons died at a young age. One died in the North Sea l. Christmas Day 1904, the 21 year old. The second oldest son, Soren, traveled for some time with his father. He was later appointed to TFDS, first as officer and then later that lead, a position he held until his death in 1915. The younger son has also had employment in TFDS in a number of years. Of the daughters traveled three to America.

Great Grandma Anna Margrethe shown below is featured in the story on this site: 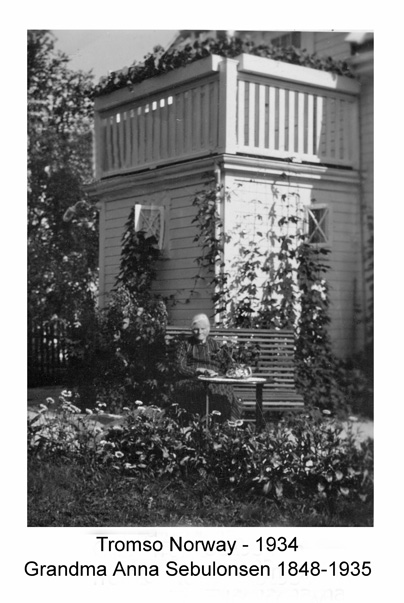 Ludvig and Anna had 6 boys and the 4 girls. Two of the boys died as infants and another died at age 24 before any of the girls left for a new life in America.

the 4 Sebulonsen sisters from Tromsø Norway: 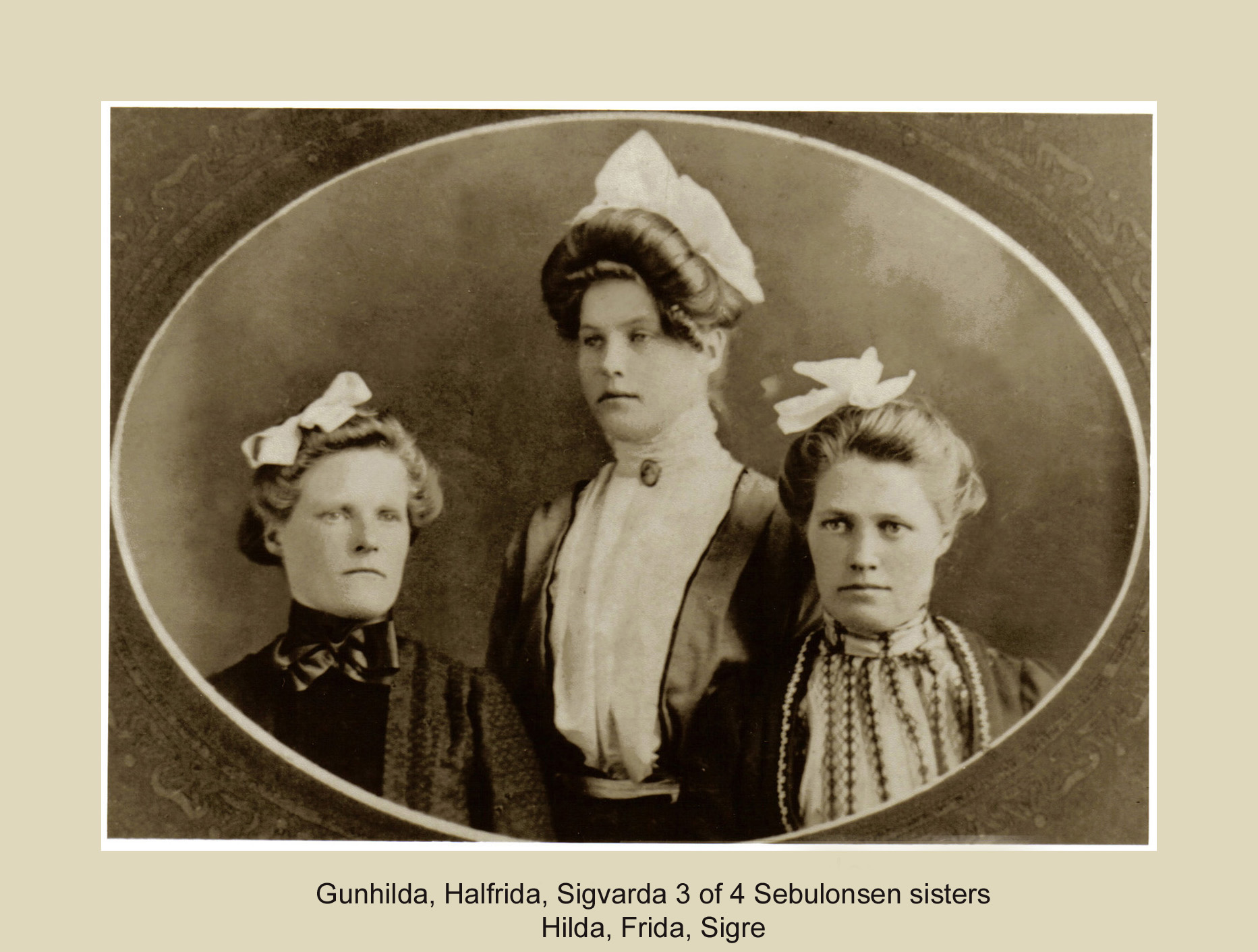 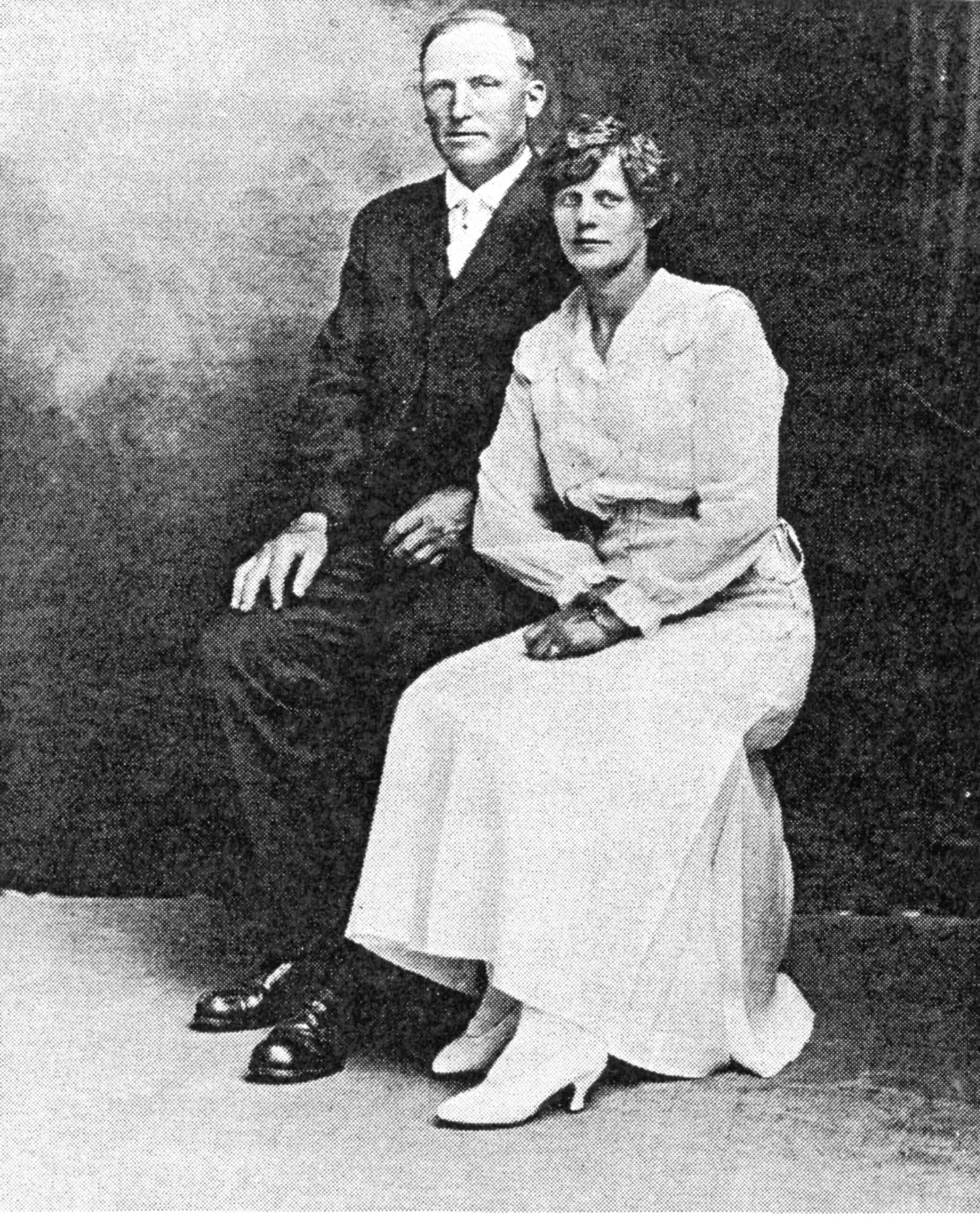 Gunhilda born 1875 was the first and oldest of the girls to come in 1897 with her husband Anton Hanson and daughter Jenni. Anton came to Lake Lillian because his brother Hans Pete Hanson was already here since 1884. Anton and Hilda settled on section 15 East LL just 1.5 miles east of Hans Petes farm and lived there until 1906 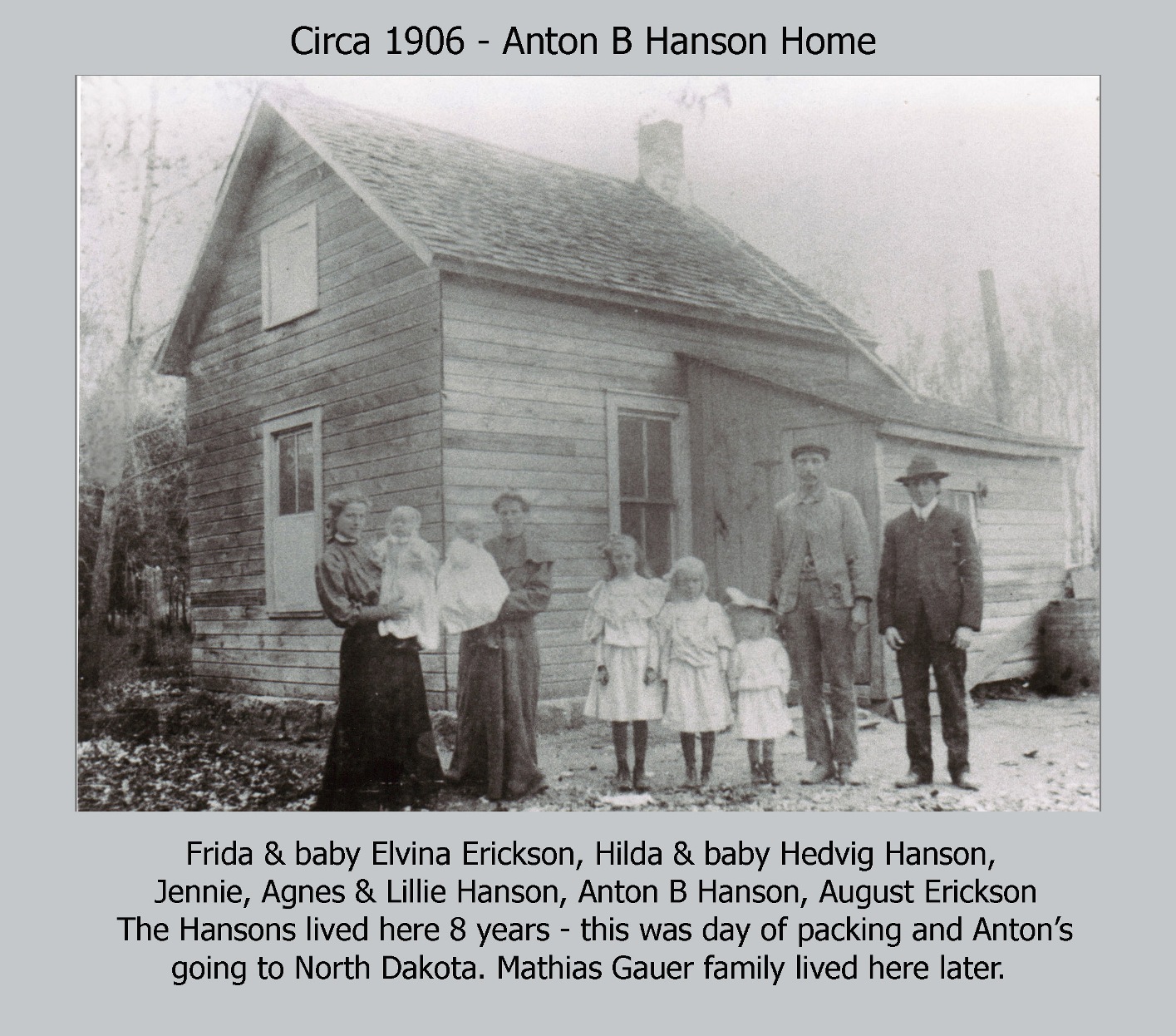 when Anton left to homestead in Slope county near New England ND. Hilda and the girls traveled to North Dakota at a later time. Anton and Hilda completed their family of 5 girls and 2 boys there.

Sigvarda born 1878 came next in 1900 with her husband Bernt Nickolai Hansen and daughters Leoda age 3 and Helen age 1. They went back to Tromso in 1901 or 1902 until 1907 or 1908 and returned to stay in MN after son Haukon was born. Sigvarda died in childbirth when her fourth child a son Sigurd was born in 1913.

Annie born 1884 came in 1910 still single until 1916 when she married Karl Hansen in New England ND. Karl was a brother to Hans Pete and to Anton. She cared for her sister Sigvarda's children for a time after Sigvarda died. Karl and Annie moved from New England ND in 1936 to Brownsville OR with daughter Adeline where they lived out their lives.


The 3 summertime pictures were taken by my Aunt Marion Bomstad Erickson on a trip to Norway and Sweden in 1989. The 3 wintertime pictures are 2013 street view screen shots using Google Earth. The location is along a rural road south of Tromsø on the east side of the Balsfjord at Andersdal. 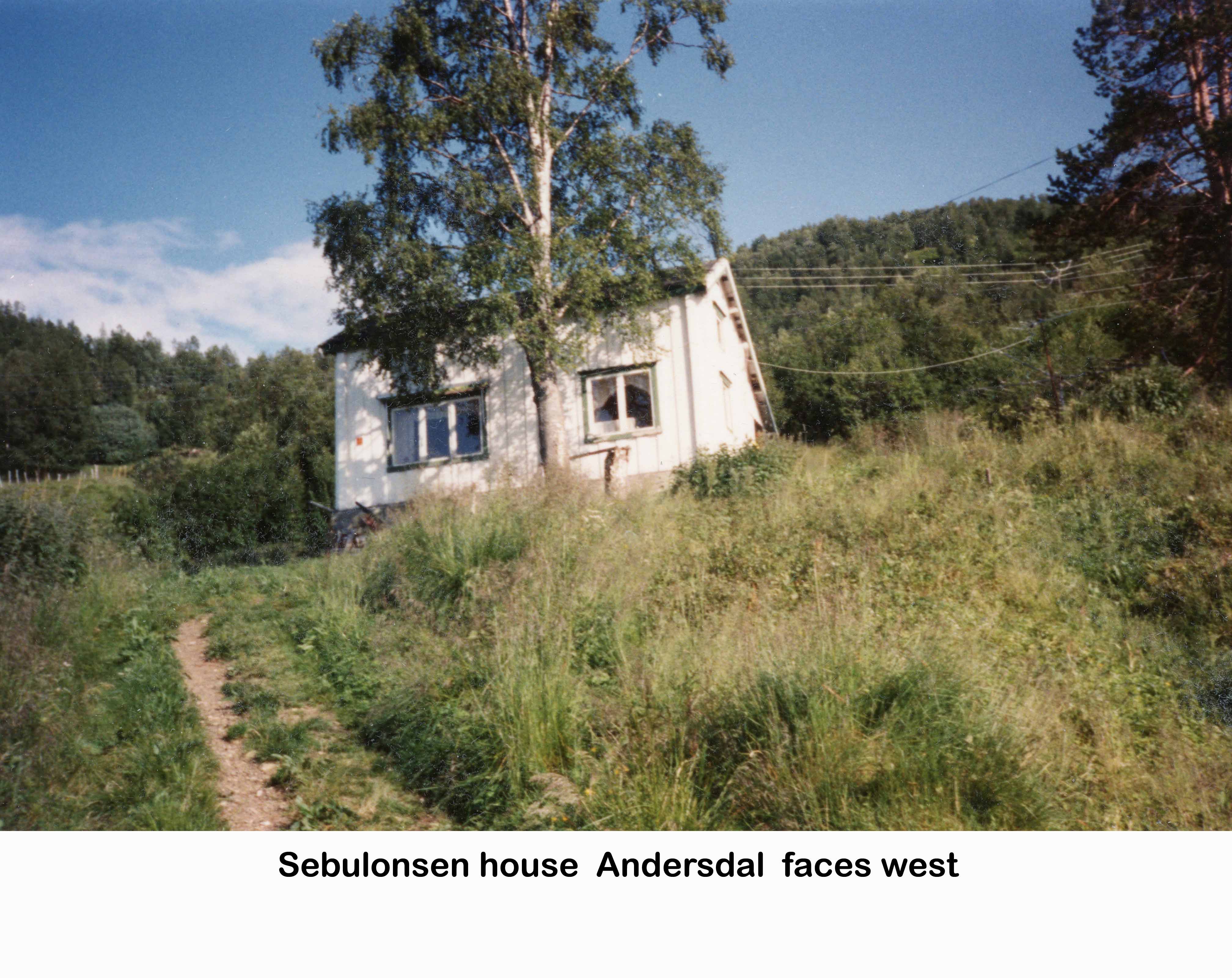 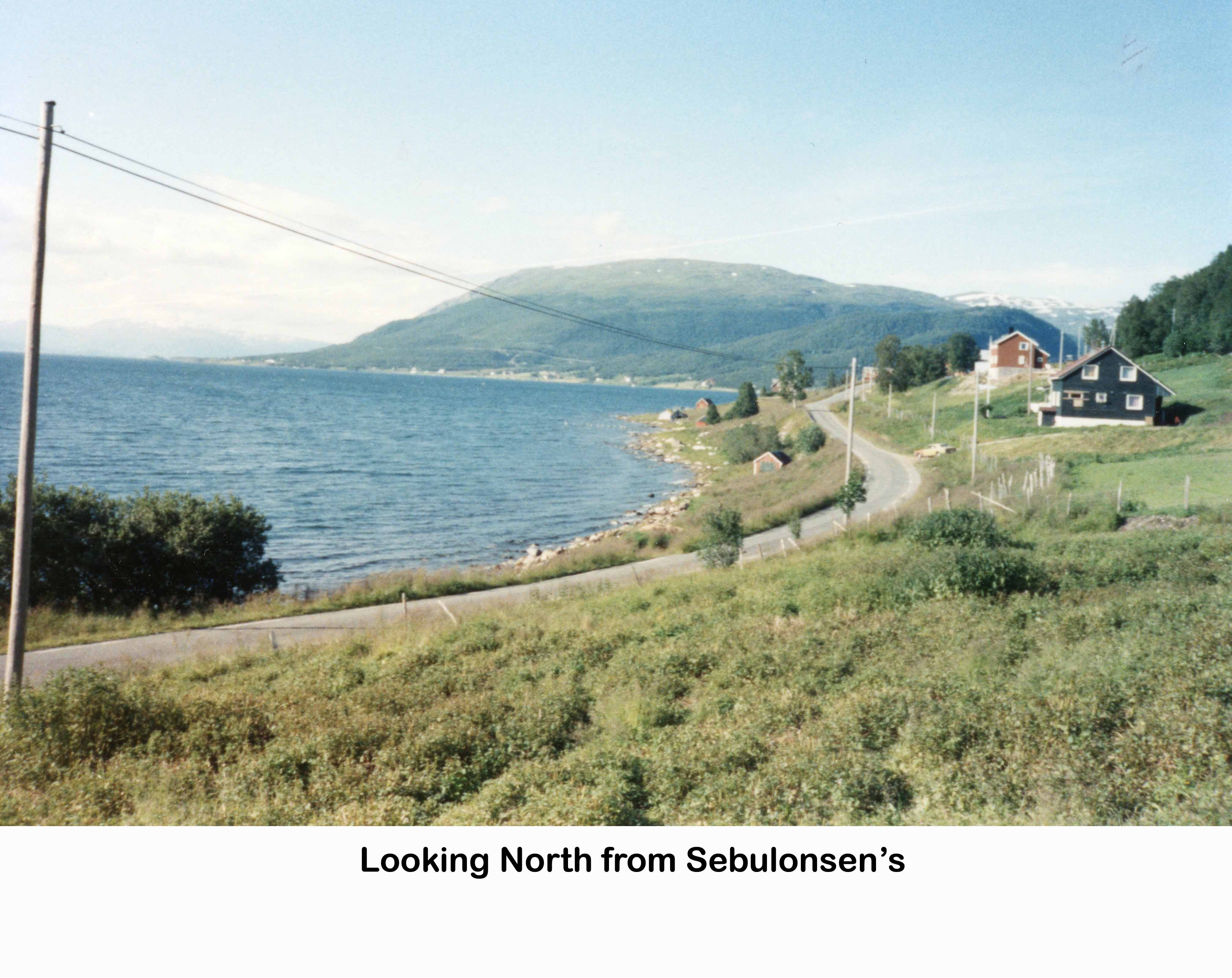 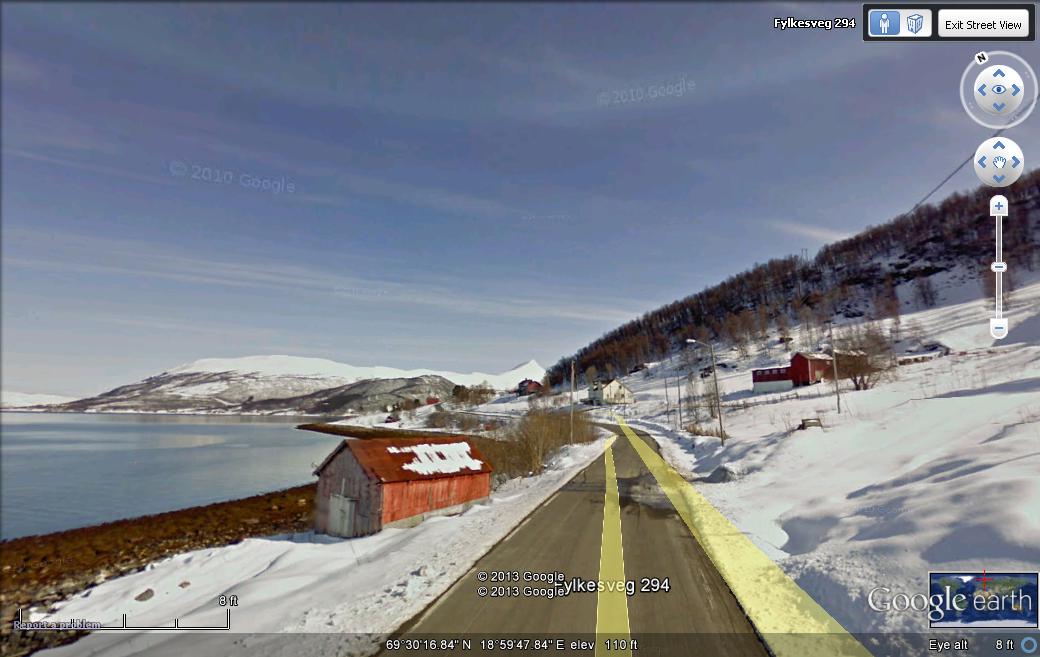 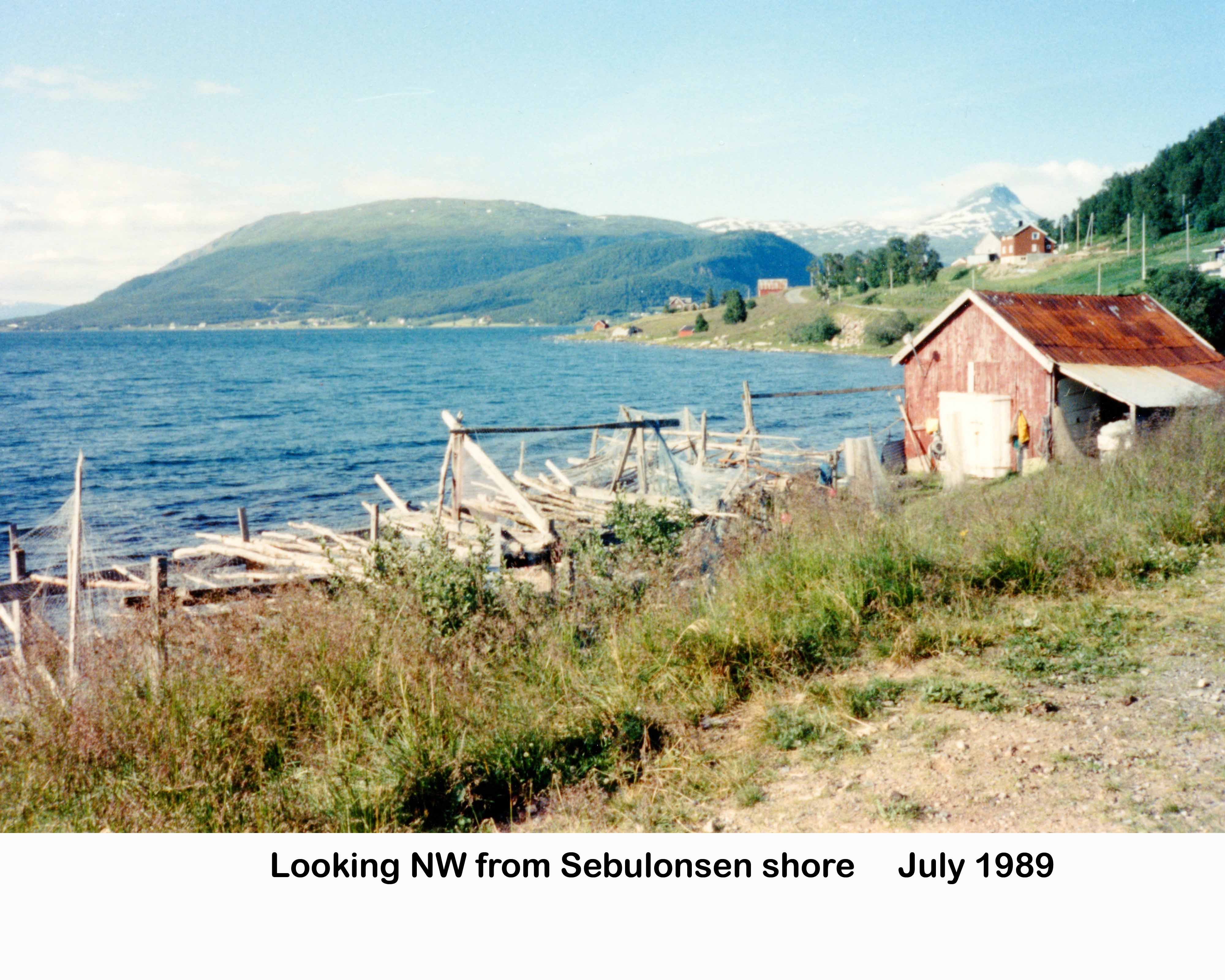 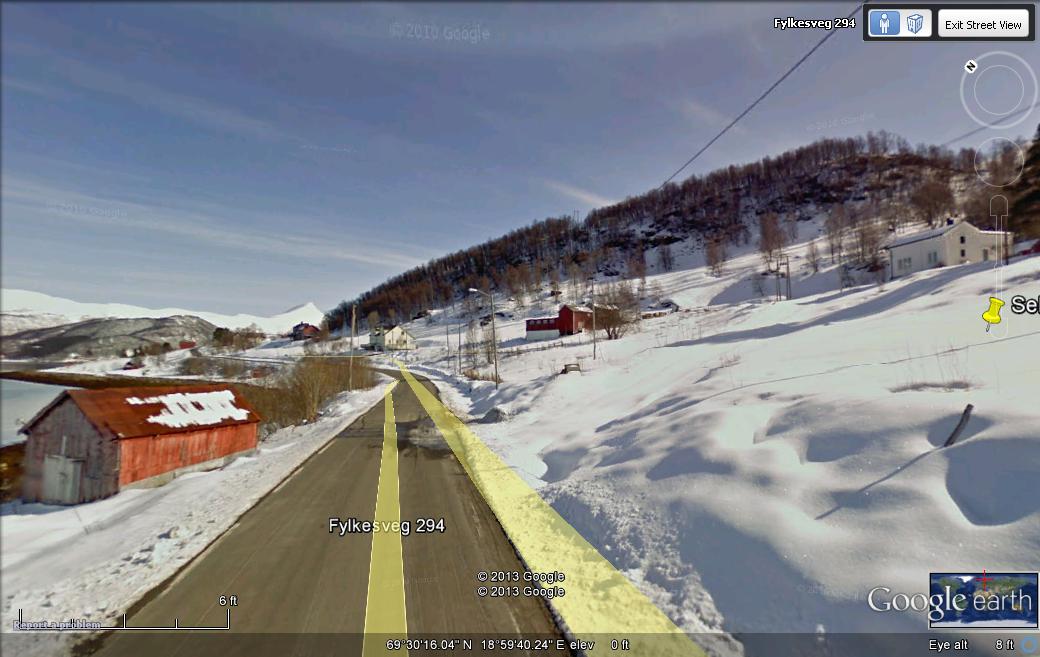 See more recent photos in my story of our trip to Norway in 2014.

In Norway, the family of Hans Andersen, son of Anders Andersen, lived at Svartnes not far south of the Sebulonsens at Andersdal. So we have Hans Pete Hansen, Anton Hanson and Karl Hansen. Bernt Nickolai Hansen was also from Tromso but not related to Anton or Hans Pete or Karl Hanson, Note that the naming systems were changing in those days. The Sebulonsen sisters would have been known as Ludvigsdtr under the older system.

Still farther south along and at the tip of the Balsfjord is Nordkjosbotn and East of there is the Bomstad place where the Rev. Johannes Andreas Johannessen came from.

Johannes A. J. Bomstad led a group of his relatives and state church dissenters that left Norway in 1862 and got as far as St Peter along the Minnesota River. They were held up there in the Norseland community because of the Indian uprising.

After 2 winters, it was safe to move on 75 miles northwest to the unsettled frontier at Lake Lillian in 1864. For shelter they built dugouts and log cabins as they established homesteads near the east side of Lake Lillian. A small number of other settlers had already been farther north in Kandiyohi and Meeker counties before the Indian Uprising of 1862. Read more about this in the story of St Peter to Lake Lillian 1862 to 1864 on these pages.

The Tromsø connection continued for many years as more Norwegians came to settle in East Lake Lillian and it was 36 years later when Frida came.

Steam Power was the way to travel in 1900

Travel from Tromsø to Trondheim in those days was by TFDS coastal ship. In 2014, we traveled overnight by train from Trondheim to Bodø followed by 24 hours on a ship of the Hurtigruten line from Bodø to Tromsø because there is no train North of Bodø.

Halfrida emigrated at the age of 13 from Trondheim on 30 May 1900. The steam ship was the Salmo new in 1900. Travel from Trondheim to America was arranged by Richard Solem, an agent of the Allan line. The Salmo was a feeder ship of the Wilson line and one of those that gathered passengers at ports in Norway to deliver them to Hull on the east coast of England. 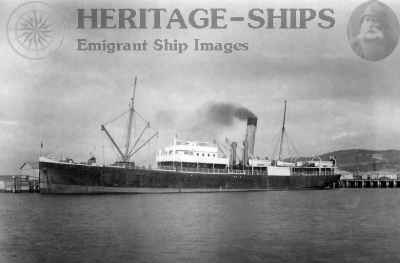 At Hull the passengers would travel overland by train to Liverpool where they could board ships of the Allan line destined to Quebec. Halfrida boarded the Tunisian at Liverpool on June 14 1900 and arrived in Quebec 9 days later on June 23 1900. 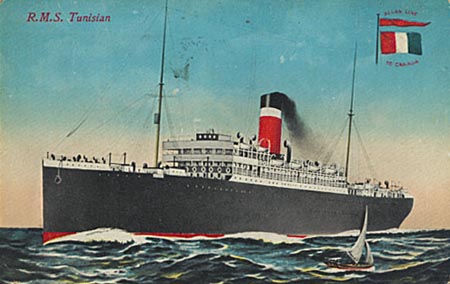 The timing and route from Quebec to Atwater is not known. My mother's notes said that they came down from Duluth. The last leg of the trip was most likely by train from St Paul or Minneapolis to Atwater. 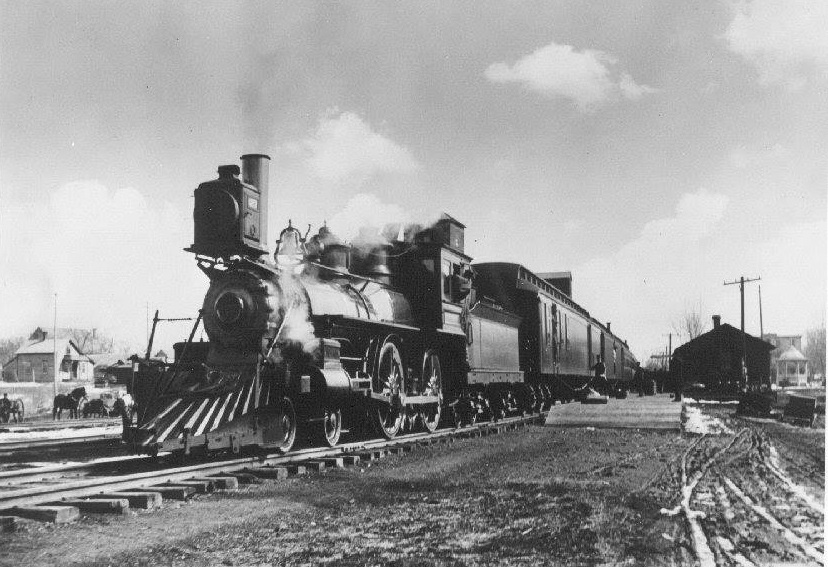 Christopher Johnson was the contact person at the destination of Atwater Minnesota. He lived in East Lake Lillian Township at the location of the Norwegian Lake Lillian Baptist Church. Halfrida's sister Gunhilda married to Anton Hanson lived (section 15 of East LL ) less than 2 miles away from the place of Christopher Johnson in those days until 1906.