I was born August 3rd, 1900 in East Lake Lillian Township , Kandiyohi County in the State of Minnesota , to Matthias and Magdalene Gauer. My Mother's maiden name was Magdalene Finger but was called " Lena ". They were from the state of Iowa , Dad from Dubuque or Grundy Center , I'm not sure which. Mother and Dad were married in March, 1893. They farmed near Akeley , Iowa until the spring of 1900 when Dad bought a farm of 80 acres in East Lake Lillian Township , Atwater , Minnesota . Note: The post office at that time was at Atwater but after the railroad was built in 1923 the post office was changed to the village of Lake Lillian .

There was no house on the 80 acre farm so the family lived in the granary that first summer while they built a two story house which consisted of one room downstairs and one upstairs. Mother told me I was born in the new house. The folks added a summer kitchen (so called) to it, which was used as a kitchen in the summertime and as a store room in the winter.

The family consisted of twins, Rose Marie and Elizabeth Bertha, born November 6th, 1893, Clarence Edward born December 3, 1897 and Willmar Ray born June 17, 1899. He passed away before I was born in 1900. There was another brother Earl who also died in infancy. He was older than Clarence. A still born baby girl also before my birth and a brother Ray in March 1900. After me came brother Matthias Lee born March 5th, 1902, known as Leo. Then there was Glen Warren born February 17, 1904 and next Freddie who passed away at the age of 6 years. He fell and hurt his knee and died of blood poisoning. I remember him as one who loved to sing. Then there was Marguerite who lived one week and died of lockjaw. After her came Francis who was born with a defect in the spine and lived only about three months. I was so disappointed that two baby sisters did not live as I wanted a younger sister so much. I remember so well that I went out into the field to pick flowers for her casket. These two sisters are buried in our Lake Lillian Baptist cemetery. Otto Vernon was born January 2nd, 1909 and on May 5th, 1911 Eleanore May was born and at last I had a little sister to enjoy. Although I was a teenager when she was old enough to play house and with dolls, I played house with her and I think I enjoyed it as much or maybe more than she did.

Now for a little of my life history as I remember it. My mother said I was born a skinny baby sort of yellowish in color so evidently I had a touch of jaundice. They had a hard time to find a name for me, at first they called me Lulu and later it was Lily so I must have gotten whiter. Ha! Anyway I wonder if my Dad at first sight of me said, "isn't she a lulu!" I don't know when I got to be Lillian and I never did get a second name as the others did. My brothers had many funny names for me when we were growing up, such as Frilles, Felix, Frolic, Lillyjohn, Lally, etc.

My folks moved from the 80 acre farm to a farm Dad rented called the Zimmerman farm which is located on the corner of the Riverside School District 89 while we lived there. We moved back to the 80 acre farm again for a year or two, then Dad rented another farm in Osceola township about 5 miles south. We were there for a year or two and again moved back and soon after that Dad bought a farm of 120 acres, 2 miles from there (the 80 acre farm that is). I wasn't much of a help as far as field work was concerned but did milk cows- I was good at that!

We had some busy years getting our new farmstead built up. Dad had a new fairly large barn built and later a large house for the growing family to grow up in. We certainly did have many enjoyable times there. Dad was a lover of music and fun. He liked young people so we entertained the young people of the community at parties and on Sunday afternoons. Mother was always willing to do her share to cook and bake good things for us to eat.

The folks acquired a second hand organ when I was about 9 or 10 years old and so we had a little practice and the first tune I picked up by ear was "My Bonnie Lies Over the Ocean". Was Dad ever proud that I could do that! Whenever anyone came over I had to entertain and did I dread that as I was so bashful and scared. Dad had an accordion and mouth organ and played the old time tunes. He raised popcorn and would ask the neighbors over for husking bees. Mother would add to the lunch but we had lots of popcorn. Dad was also a lover of horses and was proud of his driving team. He had a surrey with a fringe on top in which we would go riding, on trips to the lake and to church and Sunday School in the summer. In the winter it would be in the bob sled and the horses would have strings of bells for good music.

When about 12 years of age, we bought a new piano on which I took lessons from Mrs. Rev. or Sina Jacobson, who was our Pastor's wife. My musical ability was not so good but I am so thankful that my parents gave me this opportunity while I was young. It has been my privilege to be pianist at our church for these many years that I have been a member, except some years when we were privileged to have someone else fill that place.

My folks did not have a church home in Minnesota . They were Presbyterian so attended meetings at different places. There were times when there were special meetings held at the Riverside School and there was a Sunday School conducted there for a time too. They also attended the Evangelical United Brethren Church in Osceola Township , Renville County . When I was about 9 years old, at some

Revival meetings at the Riverside School , I raised my hand to accept Christ as my personal Savior when the invitation was given. It wasn't until about 16 years of age that I gave my testimony and was baptized and joined the Lake Lillian Baptist church and am still a member there. I went there to Sunday School which was in the English language, but the morning service was in Norwegian, that being the reason many of the folks of the community who were not of the Scandinavian descent did not attend there , including my folks who were of German descent. It gradually became all English, so my folks went some times. I remember both Mother and Dad professing Christ at revival meetings.

I graduated from the 8th grade but did not attend High School. My Mother and sisters wanted me to go to get a higher education, but in those days there was no bus service so one would have had to get a room in Atwater and just get home on week-ends. After trying to find a room without any results, I decided I wouldn't go, as Dad wasn't too enthused about it anyway. Therefore I stayed home and helped with the work as my twin sisters went out to work. I only worked away from home a few weeks.

I crocheted, played piano and read in my spare time. When only fifteen years old I started going out with a close neighbor and also a member of the Lake Lillian Baptist Church , Allie Anderstrom. We dated off and on until we were engaged in 1918 and were married August 2, 1919.

( The picture is added by the editor, Gary, and shows Lillian on left with Allie and his sister, Esther who was Maid of honor. Yes, Esther married Lillian's brother Glen almost 10 years later in 1929.) 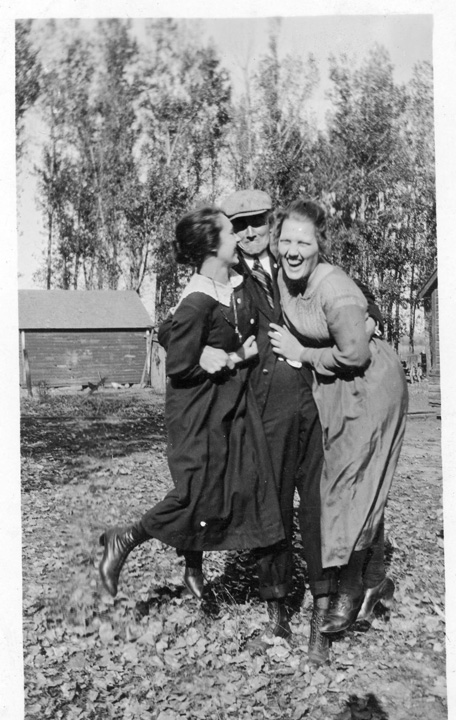 We went on a short honeymoon down to Morton and Redwood Falls , Minnesota , after being married by the Rev. A. P. Lovik, our Pastor at the time. Our attendants were brother Leo and Allie's sister Esther. It being at harvest time we could not be away very long as Allie had grain to harvest, but we enjoyed the scenery at Morton and Redwood Falls . We drove a new Ford.

That summer we lived with Allie's folks and Burton Algene was born there that winter. In the spring we rented a farm called the Gram Farm. We stayed there one year and the next spring we moved to the Emily Betzen farm and Elaine Avis was born there, in 1921. We were there a year and then moved back with Allie's folks again. All this time when we were on these other farms he was farming the home place too.

In 1923, our son Calvin Russel was born. In 1927 Roger Duane was born. The snow was very deep at that time. When Roger was three months old we rented a farm on the east shore of Lake Lillian , from the Melbyes. Mrs. Melbye was the mid-wife who attended to us when our four oldest were born. We lived on that farm for two years, moving back to the Anderstrom farm again.

Ivan Clark was born there in 1930. Dr. Jenson from Atwater attended his birth.  We lived at home there until 1932 and then moved to the Horace Anderson farm where we lived for over 33 years.  We rented it the first five years and then bought it. Now in January of 1965 we sold it to Byron Nielsen so we will be leaving here this spring or summer.

Eugene Allie was born in 1934. Dr. Anderson of Atwater attended. We spent many enjoyable years as the children grew up, attending school, High School and some Bible College , Bethel College in St. Paul , Calvin and Elaine attended there and Calvin graduated from Northwestern Bible College in Minneapolis . Ivan also attended there for one semester. Elaine also attended Biola in Los Angeles, California . All of the children accepted Christ as personal Savior and were baptized and joined the East Lake Lillian Baptist Church as they grew up. They all loved to sing and are still using their talents for the Lord. All of the boys had a little instruction in piano , but only Elaine kept on with it enough to be able to use it to serve the Lord by playing the hymns.

Calvin entered the ministry in 1952 and at this time is Pastoring his 5th congregation.

Burton attended the Morris Agricultural School . Burton loved music and played the guitar and mouth organ together. Burton and Elaine sang duets together and were asked to sing at churches and social functions. As the brothers grew up they harmonized in song-putting together any foursome they made a good quartet, much to their Dad's delight.

Birthdates of cousins have been edited out by Gary.