This story is about my mother’s parents.  Lillie is the daughter of Andrew and Anna Anderson (see their story, Pioneer Andrew A.) Lillie was born September 12, 1885 on the family farm near Lake Lillian.

George the son of Asle and Cecelia Johnson Halverson was born November 1, 1881 on a farm near Cosmos.

His mother, Cecelia, was the second wife of Asle Halverson and mother of George, Edward, Louis, Ellery and Lillie.  She was born September 22, 1859.  Her parents lived at Seljelvnes, Balsfjord, Troms, Norway.  Her father was John Nilsen and her mother was Pernille Gjermundsdatter.  She left the Balsfjord Parish on April 27, 1880 to go to America where she would join her sister and three brothers who all lived around Cosmos and Lake Lillian, Minnesota.  Cecelia only lived in America nine years before her death giving birth to her fifth child on April 17, 1889. 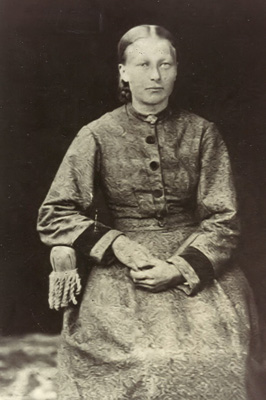 She was buried next to her brother, John Edward at the Pioneers UnionCemetery north of Lake Lillian, Minnesota. John had been killed in a logging accident in Meeker County, Minnesota.   The siblings of Cecelia who came to America were Christopher and Berit Marie Johnson, John Edvard, Martha who was married to Søren Jacobson and Hans Andreas came to America with his cousin Stromme Johnson.

George Halverson and Lillie Anderson attended the same country church when they were young.  This little country Methodist Church in East Lake Lillian Township was a social gathering place.  It can be assumed that they attended the young people's meetings and probably that is how their romance started.  They were married January 1, 1914 at Lake Lillian. 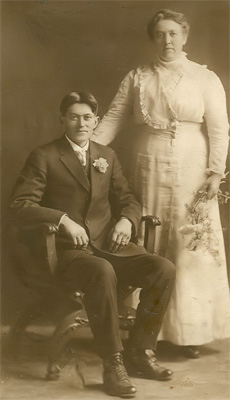 They lived on a farm on the western edge of the village of Cosmos and near George's father Asle Halverson.  They had good farmland here, raised cows and chickens.  Grandma Lillie always had many chickens. In the early years of their marriage they went to barn dances in the neighborhood.  They had six children; Allen, Wesley, Eleanor, Vernon, Gerald and Delores.  They moved to several other farms and finally ended up living in Litchfield, Minnesota. 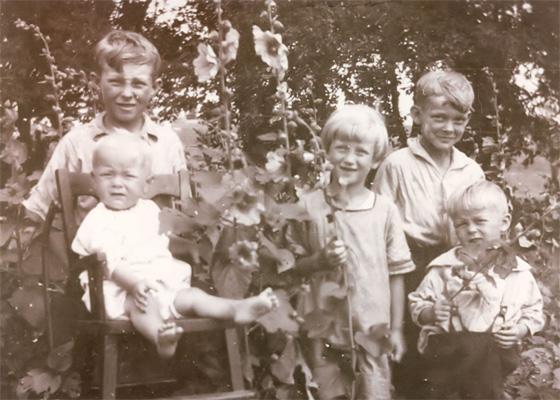 Lillie was a large woman with a domineering and persistent personality.  She loved to tease and had a hearty laugh.  However, she didn't always take teasing very well.  She usually had several safety pins pinned to her lapel.  She would tuck cash down in the top part of her corset or in the top part of her stocking.  She wore hose held up by garters.  Her feet were swollen from a fluid retention problem so she slit the tops of her shoes to make them feel better.

They moved to a large stucco house on Holcomb Avenue North in Litchfield, Minnesota in the early '40's.  After Delores left home, Lillie decided to take in old people as board and room residents.  Some were younger than she.  Grandma Halverson liked to embroider tablecloths, pillowcases, etc.  Some of the ladies that lived with her would make beautiful crocheted edgings.  She made many "Crazy Quilt" tops and liked to stitch them in a herringbone design.  She liked to be the first one to get her wash out on the line on Monday morning.

She always had sugar cookies in the cookie jar, root beer or orange pop in the refrigerator, and was known for her "Strong" coffee, pickles, headcheese and sour kraut.  She was a good cook, able to use produce from her garden.  She never wasted any food or fabric. 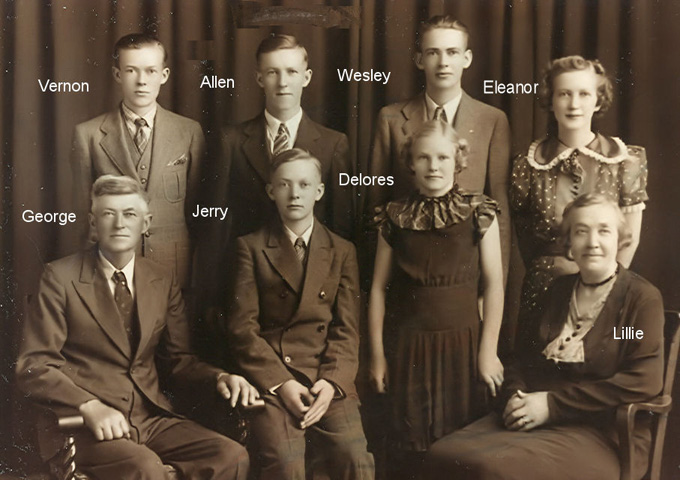 Their yard had a colorful perennial flower garden as well as a big vegetable garden with a wonderful strawberry patch.  Grandma Halverson insisted on planting potatoes on Good Friday even if she had to dig in the snow to do so. They had many beautiful rose bushes and a lovely climbing rose growing on a large trellis.

George was a quiet, patient man with a twinkle in his eye. He had beautiful hair, which turned silver gray.  He had the cutest pink and black '46 Ford Coupe.  Whenever they would go to visit someone, they would arrive very early and then they would have to be the first to leave.  This was Lillie's idea though, as George would come and stay for several days at Wilton and Eleanor's farm, to help with the work that needed to be done. 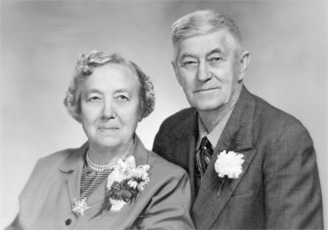 George started working at the Minneapolis Moline plant during World War II.  Because so many men were off fighting the war, jobs became available to the older men.  He worked as a janitor at Minneapolis Moline until he was 70 years old in order to collect full Social Security Pension.   The plant located in HopkinsMinnesota has been torn down.

In the early 1950's Allen and Rose sent airline tickets for George and Lillie to fly out to Seattle to visit.  Allen, being a Northwest employee, could get his parents passes.  They had not flown before, so that in itself was an experience for them, but that was just the beginning of their adventure. One of the things Allen's had planned for them was a trip up to Mount Rainier.  Allen had a Studebaker coupe, into which they loaded everyone and everything went well until they began the actual ascent. The road had the mountain rising to one side and nothing but space on the other.  Lillie was not very encouraged by the downward view.  Actually, she was just plain scared out of her socks!  She was afraid that she was going to fall over the edge, but thought she would be safe if she were on the other side of the back seat.  This was not all that easy because George and Allen's boys (3 of them at that time) were also in the back seat.  When she got to a point of some security, the road would take a turn and she would find herself again looking over the edge and head for the other side of the car again.  It didn't occur to her that if one side of the car went over the edge that the other side of the car would also!

They did get up to the park on Mount Rainier and then got home again in one piece, but Lillie was not bragging about how lovely it was to drive on mountain roads!

Lillie decided that as long as they were "out west" it would be a good time for her and George to go down to visit their son Vernon in California. Allen said he would arrange for them to fly but Lillie said no to that. They would just go on the bus, for it wouldn't take very long and they'd be able to enjoy the scenery. They were already at the west coast! The bus ride down was uneventful even if it was longer than expected. They had a nice visit and then boarded the bus to go back to Seattle. While they were stopped for coffee at Bakersfield, California, the cups and dishes began to rattle around - they were in an earthquake! There were no injuries and no real damage, but it was something they had never gone through before. The rest of the bus trip was calm.

The plane trip back to Minnesota was not quite what they had expected, either. Minneapolis had very bad weather and the airport was closed. After a time they were diverted to Detroit where they landed. By the time they finally got back to Minneapolis, Lillie had decided that they had had enough excitement and adventure for one lifetime and vowed never to fly again!

They celebrated their Golden Wedding Anniversary in January 1964 with a party for family and friends. 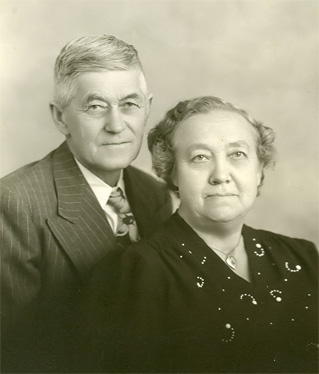 When their health failed, they both lived in the Cosmos Nursing Home for a while before they died. Lillie lived there from January until March 29, 1966. George lived two more years. We would ask him how he liked living at the home and he would answer, "I've got good food and a good bed. What more could a man want?" Eleanor remembers the day she took him to the Meeker County Hospital. He asked her "Where are we?" She answered "At the Hospital." He said, "The old machine is worn out and there is nothing to do." He lived three more days. He died July 29, 1968, from uremia poisoning (renal failure).

Mrs. Halverson, the former Lillie Anderson, was born September 12, 1885 in Lake Lillian Township.  On January 1, 1914 she married George Halverson of Cosmos, who together with his wife, has resided at the Cosmos Nursing Home for the past few months.

Surviving, in addition to her husband, are six children: Allen of Tokyo, Japan, Wesley of Hinckley, Mrs. Wilton Bomsta (Eleanor) of Lake Lillian, Vernon of Los Angeles, California, Gerald of Elko, and Mrs. Erle Draxton (Delores) of Minnetonka.  There are also 22 grandchildren and six great-grandchildren.

George P. Halverson, 86 of Litchfield, who had resided at the Cosmos Nursing Home the past year, died Monday, July 29, 1968, at the Meeker County Memorial Hospital.