This story was prompted by a visit to The Chippewa Falls Museum of Industry and Technology in 2014. The museum has a section for Super computers developed by Seymour Cray. The museum at http://www.cfmit.org/ also includes interesting sections of the Mason Shoe Company, Leinenkugel Brewing Company and others. The Computer section was of most interest to me because I was part of that industry while I was employed by Control Data Corporation.

This resulted in donations of some memorabilia that I had saved from the 1960's including the swivel card extender, 2 cordwood circuit modules and a CDC customer service manual for the 6600, 6400 and 6500 computers.

Sally Sweet is the coordinator 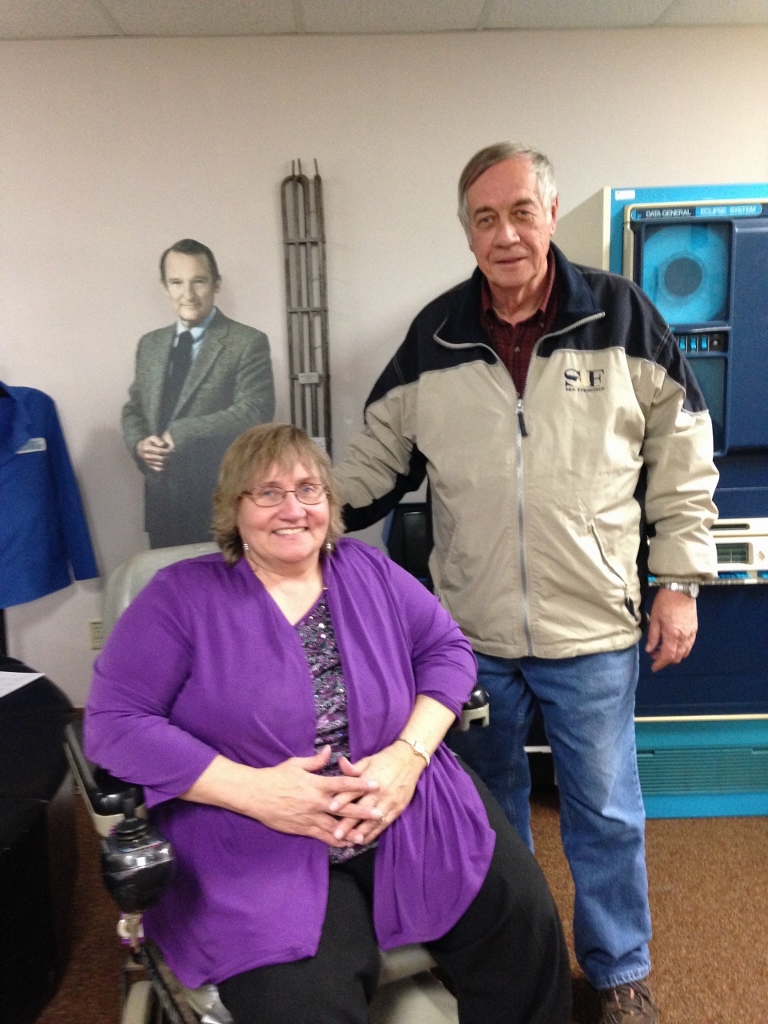 Sally and I as we were talking about the days 50 years earlier when I met Seymour Cray. 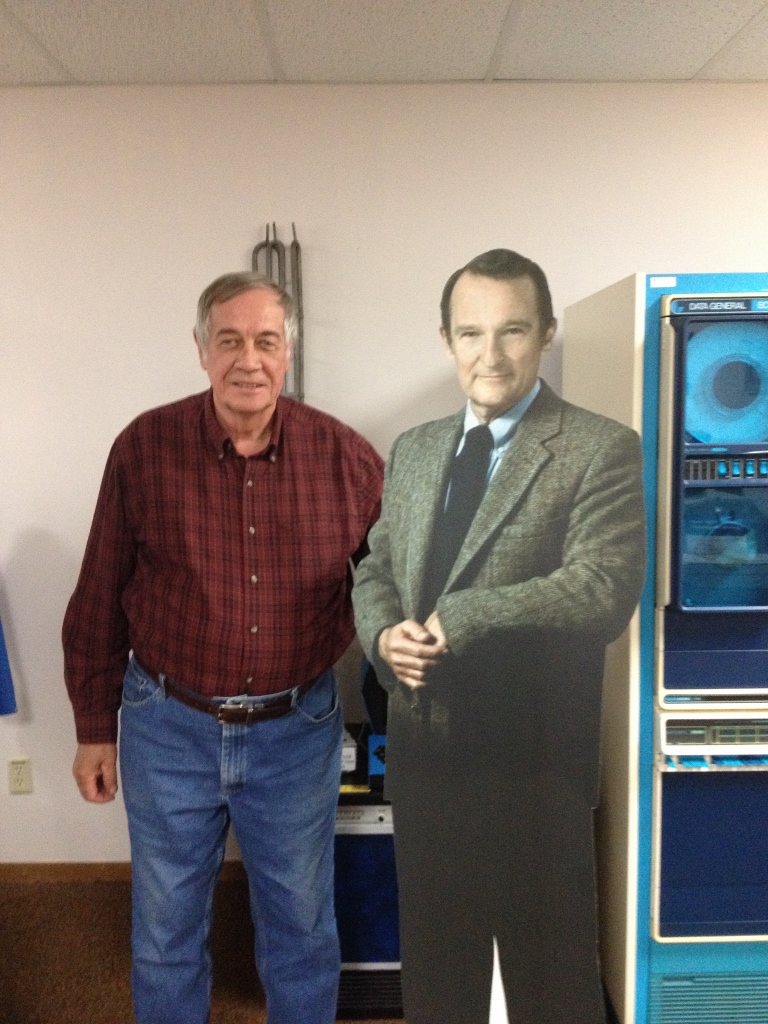 My days at Control Data started as a summer job in 1961 following my freshman year in engineering at the University of Minnesota. This was preceded by 3 years in the United States Marine Corps where I served as an aircraft structural mechanic.

During the next 10+ years from that summer job as an engineering technician I worked at Control Data full time and part time as a technician and documentation coordinator while being a student at the U.  I graduated with a BME in 1969 and became a Design Engineer with CDC until January 1972.

Some highlights during that period:

I was the CDC technician helping to install the first Control Data Digital Geo Ballistic Computer into the missile control center aboard a submarine being built at Groton Connecticut. The SSBN 616 Lafayette was the 11th submarine built to carry Polaris Missiles and it was the first of its Class of 9 built. The nation was scrambling in those days to build our military capability and I worked in the Strut Wear building in Minneapolis, at 1015 S 6th St, doing overtime often 58 hours per week helping to build the first systems and work on the cable routing. It was a design and build process and the first units were shipped before the documentation was complete. The Navy Special Projects officer knew that I knew the task and asked me to go. So for 2 weeks I was in the submarine dockside for a portion of every shift around the clock to show the shipyard workers how to install the cables.

My task was to visit the CDC Chippewa Labs right after the first 6600 super computer had been shipped to a customer and gather its documentation so that production could be transferred to the Arden Hills plant after the first 7 units were built at Chippewa.  Directions were to follow the power lines out of town to the remote location of the lab.  The documentation drawings were with black ink on linen and the highest quality that I have ever seen.  There were only about 25 employees at the lab and Seymour Cray wondered who I was and why I was there. So on my second day there he asked me to his work bench and we talked for about 15 minutes while he was seated on a lab stool and continued to work at the bench with his oscilloscope, circuit boards, components, tools, soldering iron and notebook.

While I was continuing to initiate documentation for the 6000 series and interfacing with the departments for mechanical design and continuation engineering, circuits, power supply design, manufacturing, standards and drafting, technical publications and computer check out; I learned of a need for a card extender for the cordwood circuit modules of discreet components that were used on the 6000 series and the 1700 computer.  I volunteered to do this as my own design project with the requirement of no budget for tooling.  The initial build was for 25 units and I do not know how many were made after that. 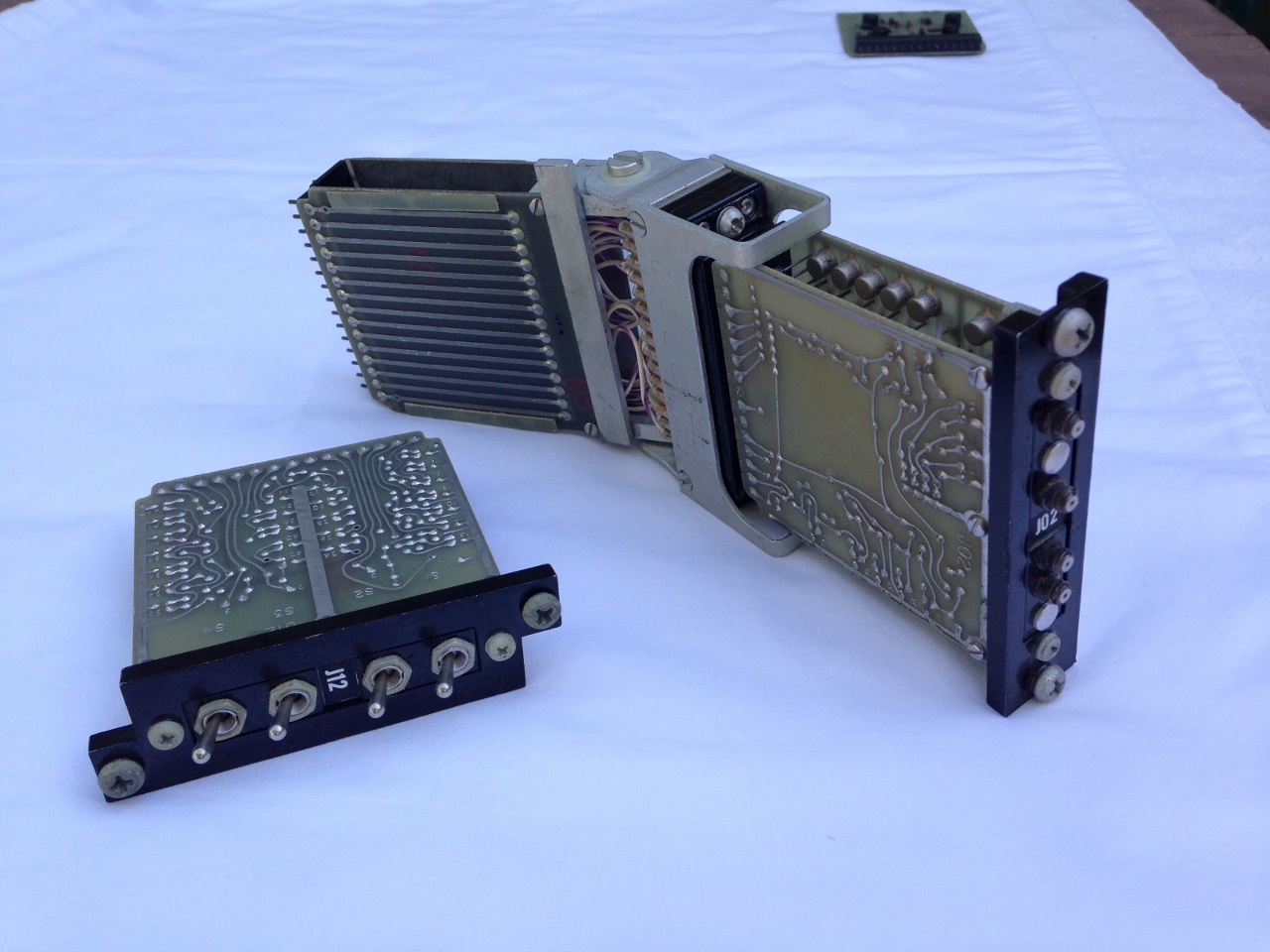 These are the modules that I donated to the museum. 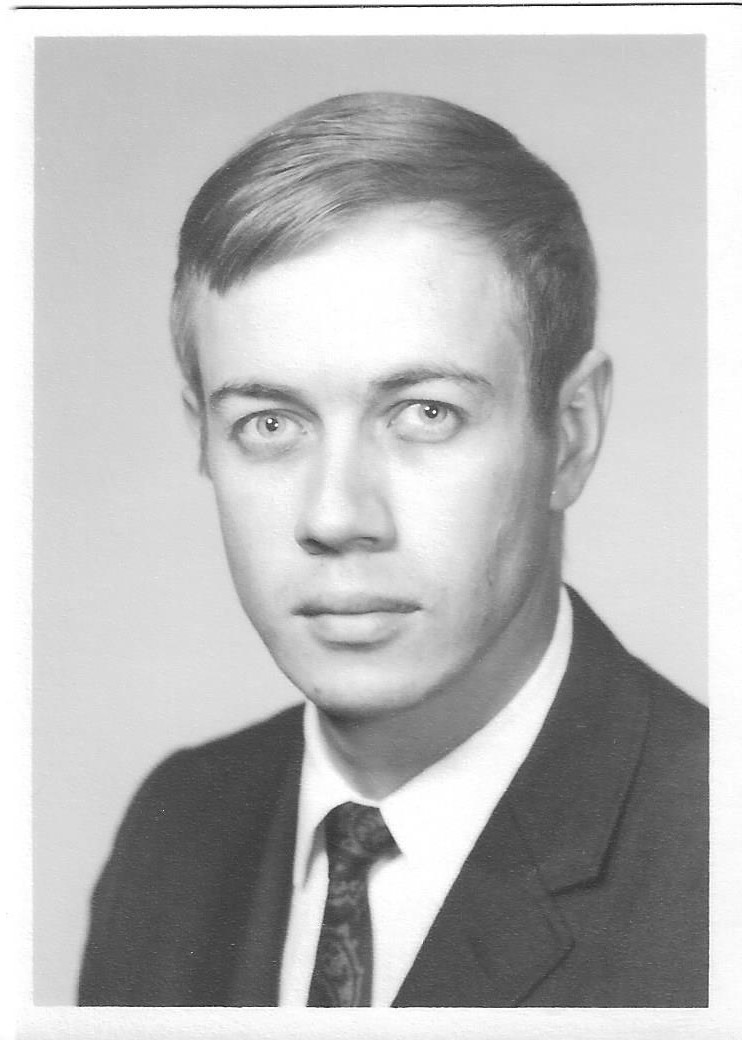 I was a Design Engineer in the Electronic Packaging Department at Arden Hills. The advanced Development Lab at Arden Hills was developing the Star 100 computer using integrated circuits.   There was an engineering model, EM 1, for Star software development that was made with hardware modules configured of 50 paks. That packaging concept was developed for the 3500 computer and it was the first CDC computer made at Arden Hills that used integrated circuits.  When I first saw the EM 1 it was in its naked state, the back planes were hung on free standing relay racks and the ROS stack was on a table with wires all over.

It was decided to make a new model called the Star 1B for customer software development that could be made quickly. The concept was based on replicating the EM 1 and completing the packaging using frames and cabinetry parts that had been designed for the 3500.  So that was my project to mechanically configure and document the system.  One of the unique things about it was a ROS memory module.  The module was used for the unchanging kernel micro code of the CPU and was a large cube made with 12 or more sets of very thin epoxy circuit sheets that worked by sensing capacitance at the intersections of vertical and horizontal traces.  So each set had a sheet of Parallel vertical traces and another of horizontal traces on either side of a program sheet  patterned with an array of small squares that either had an island in the center or not.  There were thick aluminum plates on either side of the entire stack and heavy steel rods were used with nuts to compress the stack. This was necessary for uniform spacing without gaps.  I came up with an external tilting mounting frame and incorporated heavy duty slides to put it into an equipment cabinet and allow access to all sides, top and bottom for maintenance and handling.  The prototype sheets had been made at Hutchinson Technology.  A visit to Hutchinson helped me to complete the ROS sheet specifications and drawings in accordance with the prototype.  Budget constraints did not permit enough design reviews and improvements at that time. The ROS design had to deal with very small signals and timing needed to be very precise.  The drivers and sense amps were on separate modules and connected by long wires soldered directly to the delicate traces on both ends of the vertical and horizontal sheets.  So it was not fun to disassemble the stack and change the program sheets for micro code revisions.  Trace shorts by metal shavings sometimes happened during those efforts.  I wonder how much effort and time would have been required to design in connectors at the stack. The Design of the Star 1B was complete and in production before the end of 1971.  The first run was for about 7 systems and no more were made. The capacitive ROS stack concept was eventually rendered obsolete by ROM integrated circuits.

The computer systems market was limited by the economy and industry competition. All CDC employees had been on a 10% salary reduction program for a time. New projects were scarce as they ran the budget 17 times in 1971 to reduce and prioritize efforts. CDC had come to the realization that all divisions were making money as measured by the value of equipment shipped except one and that was the systems division.  It was the division that combined and checked out the computer and peripherals before shipping the systems to paying customers.  Sometimes the process took longer and sometimes the customer wanted to delay paying for the costly systems.

I was out as a young engineer and looking for a career change.  At the time I was disappointed at leaving an interesting and special company. Others in mid-career had it worse later with more cutbacks as the industry changed faster than CDC could. Everything changed as mini and micro computers were developed by others.  Control Data as I new it is long gone.  The Cray legasy continues with Cray Inc headquarters in Seattle, R & D in St Paul, and manufacturing in Chippewa Falls. Desk top computers, tablets, calculators and smart phones have become appliances for everyone.

I moved on to interesting Design and Development jobs in Building Automation, Water Softeners, and Water Heaters.  Now I am busy and enjoying retirement.