The first of many Swedish immigrants came to settle just to the west of Lake Lillian Lake in 1869 when the railroad was built to Atwater and Willmar. Note that the Norwegians from Tromso had arrived in 1964 and settled mostly north and east of the lake. 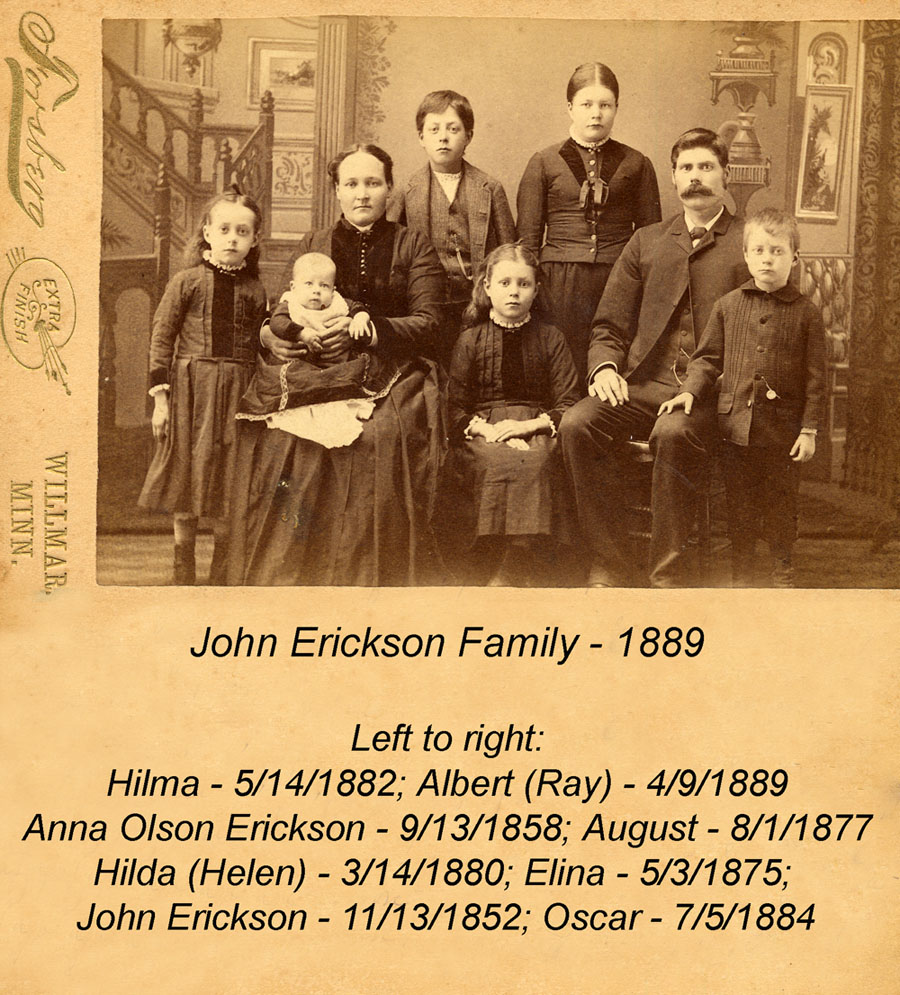 John Erickson, emigrated in 1873 and settled on section 10 of Lake Lillian township. .

John also had a brother and two sisters emigrate from Sweden to settle in Lake Lillian.

One of his sisters, Kerstin Jansson, married Peter Anderson and their family became well known in Lake Lillian. Their story is chronicled in three volumes entitled "The Anderson Sisters" issued in 1988- 1990 by Wendell Lundquist.

Note that section 10 is just south of section 3 and south west of section 2 where Larsved Olof Mattson lived. Note also that Anna Olson was a daughter of Mr Mattson.

John married Anna Olson in 1874 in Lake Lillian and they had 7 children including my grandfather August.

Oct 7 1892 /Alliance Standard/ Willmar MN
A sad accident happened in Lake Lillian last Wednesday. Mrs. John Erickson, while out driving, was thrown from the carriage and sustained injuries that, in spite of the best medical attendance proved fatal. The heartfelt sympathies of the entire community go out to the bereaved family.

John went on to marry Anna J Bomstad and they had 4 more children.

An enjoyable social was given at the home of Mr and Mrs John Erickson on the 21st, the occasion being the celebration of Mrs Erickson's 27th Birthday. Anheuser busch, chocolate cakes, dancing, etc, kept the crowd happy until morning when, as they all went home secretly vowed never to wait for a second invitation to birthday parties. May they live to celebrate many more such days.

Obituary of the Late John Erickson

John Erickson was born in Gagnef Parish, Dalarna, Sweden, January 13, 1852. He was one of the pioneers of this community, coming here from Sweden in 1873, thus being a resident of Lake Lillian Township for 66 years. In 1874, the year alter his arrival, he married Anna Olson of this place. To this union seven children were born, of which six are still living, a daughter Josie having died in infancy.

His first wife passed away in September, 1892.

On January 27, 1894, he entered into marriage with Anna Josephina Bomstad, also of Lake Lillian. Four children were born, of which three are living and one son having died in infancy.

He leaves to mourn his departure, his wife and nine children as follows: Lena of Lake Lillian, August Erickson and family, Mrs E.J. Strom and family, Mrs Oscar Lundahl of Aberdeen, S.D., Oscar of this place and Roy of Aberdeen, Marvin, Mrs Lundblad and Quentin, all of Lake Lillian, 22 grandchildren and three great grandchildren, together with other relatives and a host of friends.

Deceased passed peacefully away on Tuesday morning, April 24, at the age of 76 rears, 3 months and II days He was a member of the First Lutheran church of this place. Loyal and faithful to the church, always attending the services as long as health and strength would permit him to do so.

Funeral services were held on Friday, April 27, at 10 o'clock from the home and at 10:45 from the church. In the home the pastor read the 90th psalm and offered a prayer. Mrs Clarence Anderson sang; a song in Swedish. The services at the church began by singing; Hymn 612, 1-2. After which Mr Walner sang a song, in Swedish. The pastor spoke in English, using: as his text Hebr. 9:37. The male chorus sang, 'In the Glow of Some Glad Morning.' The obituary was read by the pastor who also spoke briefly in Swedish. Mr Leeberg sang a song after which the benediction was pronounced by the pastor.

Interment was made in the First Lutheran cemetery. May he rest in peace.

The First Lutheran cemetery is out where the Christine church was in section 21. The LL community cemetery was established just south of town later in 1940.

I have many photos to add to the Erickson story as time permits.

More information about the Peter Lindquist family will also be a part of a future edition .