The eldest daughter of Erik and Ingeborg Larson, Mary was born in Lake Elizabeth Township of Kandiyohi County, Minnesota. After the death of her mother, when Mary was 9 years old, she went to live with a family at Terrace, Minnesota. Mary told it this way: “The winter after mother died, her father learned of this family who were willing to take her in. Her father bought cloth and had Sedevart Nelson sew a complete outfit for her. On a cold, gray, snowless day she and her father rode to Willmar on a wagon load of wheat with Sedevart Nelson where they were to meet the family with whom she was to live. The father of the family proved to be a kind and compassionate man.” After he was accidentally killed she went to live with friends in Minneapolis. She also lived for a time in Glenwood and Minneapolis. She was a Charter member of Tromsø Lutheran Church when it was organized in her father’s home on August 16, 1885.

Mary married Salomon Salomonsen, who emigrated to America on May 17, 1882, on October 20, 1885 Rev. Kleven conducted the service at the home of her father, Erik Larson. Their witnesses were Erik Larson and Anton Larson. It was the first wedding recorded in the newly organized Tromsø Lutheran Church records. He was also a charter member of Tromsø Lutheran Church. Solomon was born March 20, 1856 in Stakkenæs, Karlsøy Parish, Troms, Norway, the son of Salomon Salomonsen (sr.), 1824-1878, and Elen Maria Hansdatter, 1827-1911. Elen Marie came to Lake Lillian in 1883 and she was also a charter member of Tromsø Lutheran Church as “Salomonsen”. Elen Marie died at Lake Lillian and is buried in Tromso Memorial Cemetery.

Other members of the Solomonson family (original spelling, “Salomonsen”, and later spelled “Solmonson”) that came to the Lake Lillian community were Ole and his wife, Elen Marie Mathiasdatter and Ole’s brother, Johan, in 1881, and three sisters, Elen Petrica, Hansina and Anne Cecilie in 1886. The Solomonson family and Erik Larson came from the same area in north Norway, near the farm group, Bredvik, east of the city of Tromsø on Ullsfjord in the Karlsøy Parish. The area around Ullsfjord later became part of the Lyngen Parish. When Salomon Salomonsen was baptized in 1856 Erik Joseph Larsen was a godparent for his future son-in-law.

Theodore’s funeral in 1963 was the last entry of the Solomon and Mary Solomonson family in the Tromso/Grace Lutheran Church records.

and Mary was left with 5 children, ages fifteen to seven years. The following is a brief account of that day is taken from what was written by Mary and Solomon’s daughter, Alice.

Solomon and Freeman Stafford were falling trees in the wood lot. A freak accident happened when the top of a falling tree hit the crutch of another tree and bounced back and fell on Solomon. Freeman, with superhuman strength, lifted the tree from him and ran to get a team and sleigh to bring his uncle home. What agonies Solomon must have suffered during such an ordeal cannot be imagined. The full extent of his injuries could not be determined, but there were multiple fractures of ribs and shoulder, and also puncture of the lungs. This resulted in hemorrhaging which caused his death.

The children, relatives and friends attended the funeral three days later at the Free Lutheran Church and Rev. Reitan sang “Den Store Hvide Flok” (“The Great White Host”) and Solomon was buried in the church cemetery.” Solomon was survived by 13 of his 14 children. For a longer account of the accident see the Solomon Solomonson (jr.) section in the Solomonson Family section of this history. 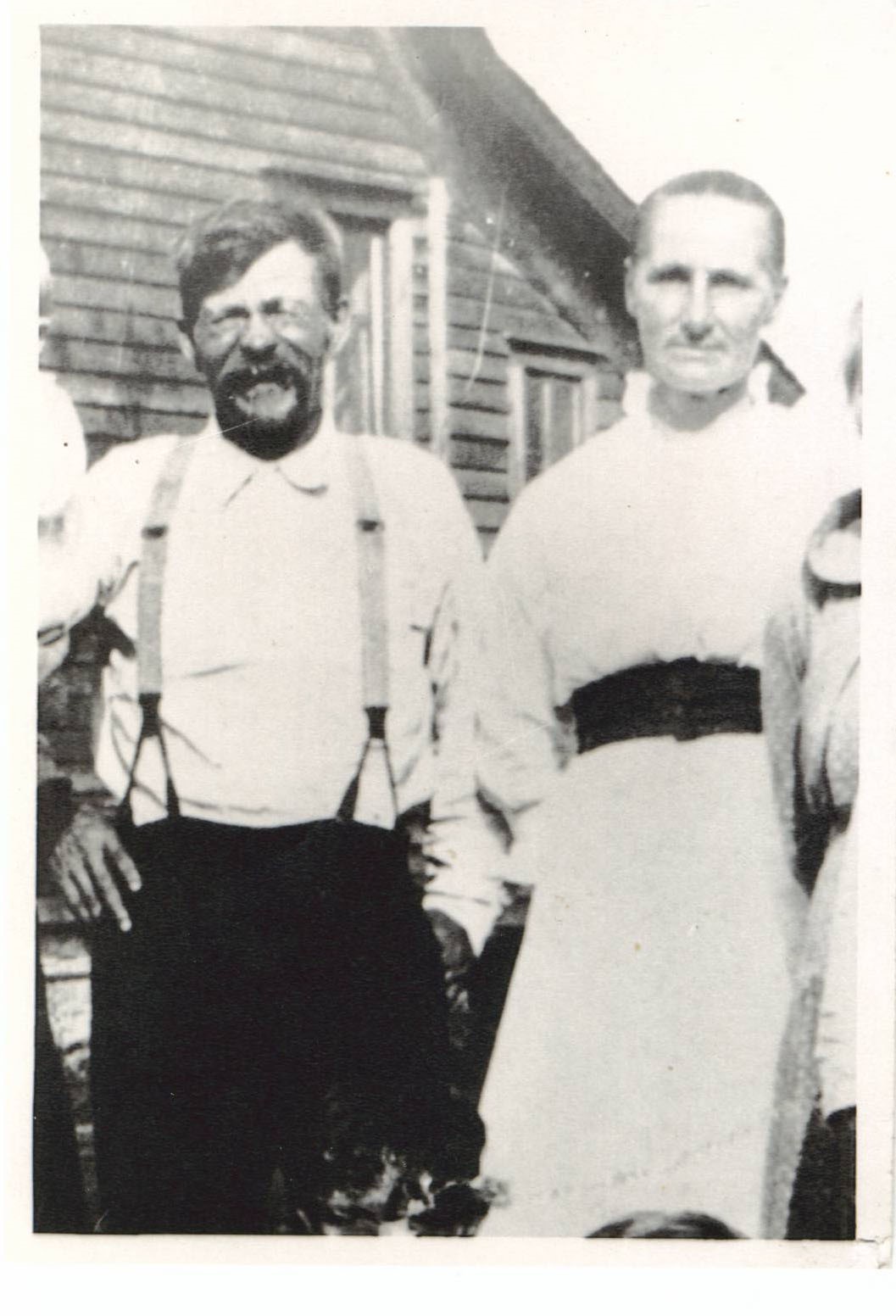 In the 1920 census Mary was still living in Lake Lillian Twsp. with her children, Oscar, Anna, Henry, Ezra, Theodore, Curtis and Harold. 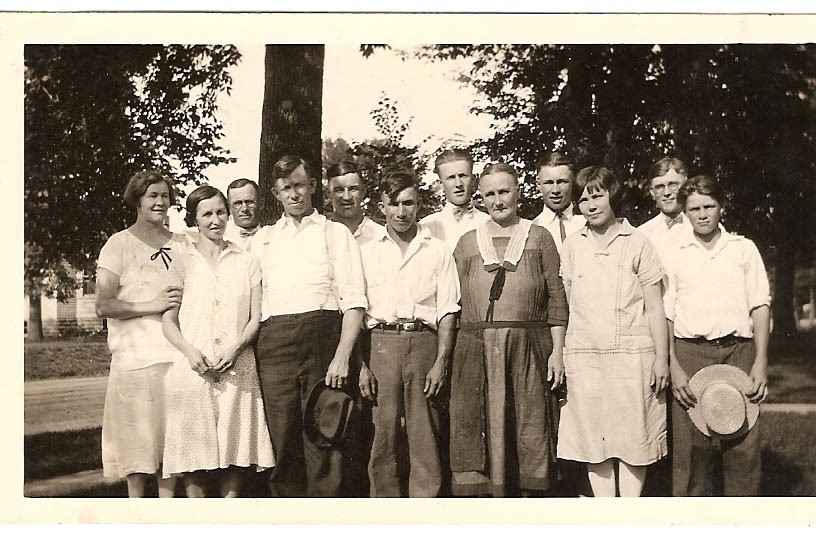 Mary later lived in a house on the north edge of the Lake Lillian village. Mary was a very active, charter member of her church. She served as Sunday School Superintendent for sixteen years and was the president or vice president of the Ladies’ Aid from 1908 to 1939, until the age of 72. She also served as Deaconess of Tromsø Lutheran Church in 1936 and 1939. One of her granddaughters remembers that when Mary was “quilting” she said she was sewing prayers for her. Another granddaughter recalls: “I still remember seeing Grandma Mary standing up in the front of the church leading special adult Bible studies and discussions. She was a very special inspiration for me and one of my most important women role models”. Also, another granddaughter remembers one time when she was serving “Norwegian lefse”, one man ate all the lefse from the serving dish, thinking it was his own plate! When a tornado hit Lake Lillian it broke the windows out of the house, pulled a quilt off the bed and wrapped it around her beautiful peonies as if to protect them. Mary was a special person and stood “tall” in many ways. Mary died on July 10, 1944 in Willmar, Minnesota of heart disease and her funeral was the last funeral in the old Tromsø Lutheran Church. She is buried in the church cemetery with her husband and several of her children. “The church was filled to overflowing with friends and relatives who gathered to pay their final tribute to this respected pioneer woman. Six sons, Henry, Oscar, Harold, James and Theodore carried their mother to her final resting place.” She was survived by 10 of her 14 children and one brother, Ole E. Larson and one half-brother, Martin O. Larson. 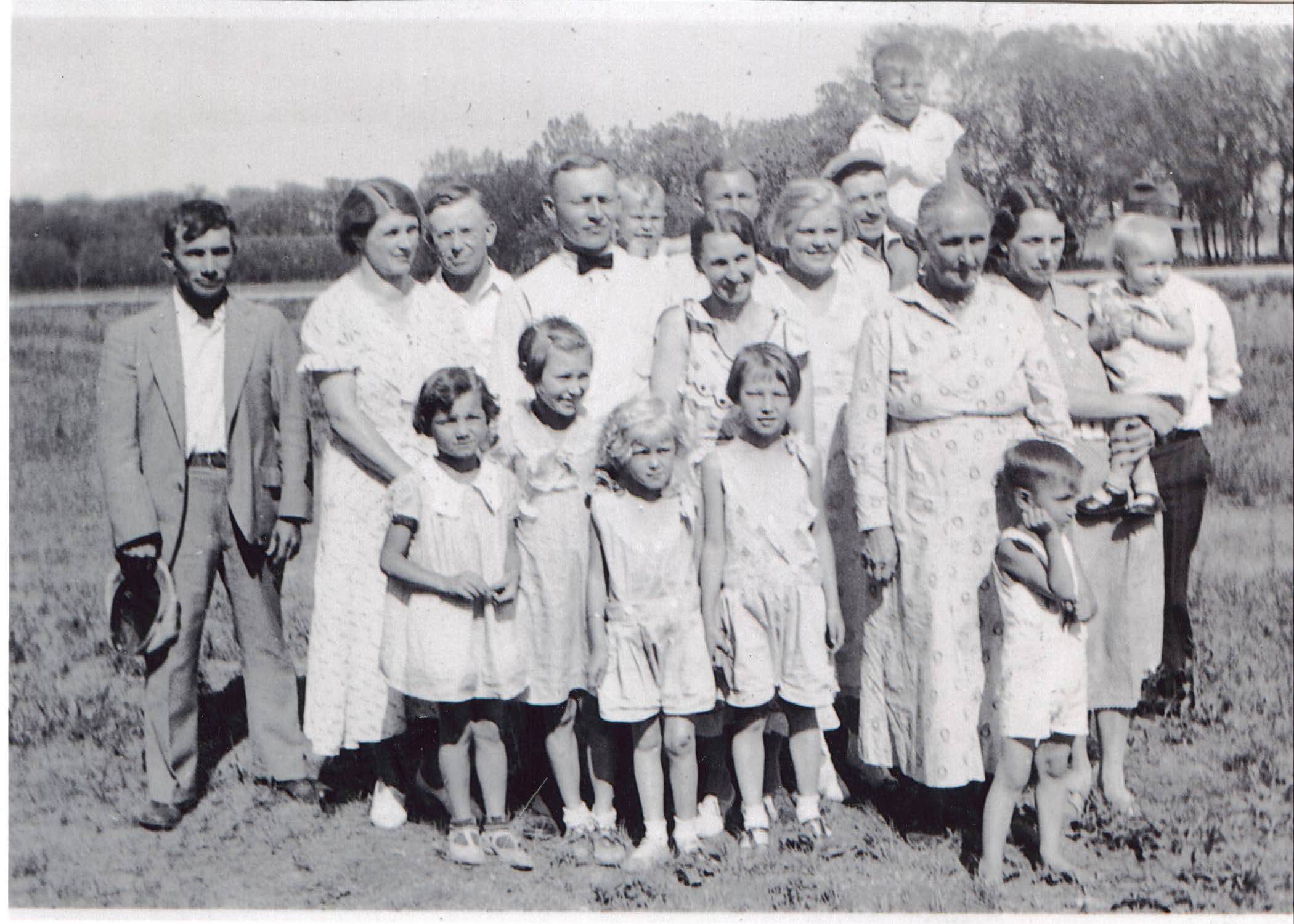 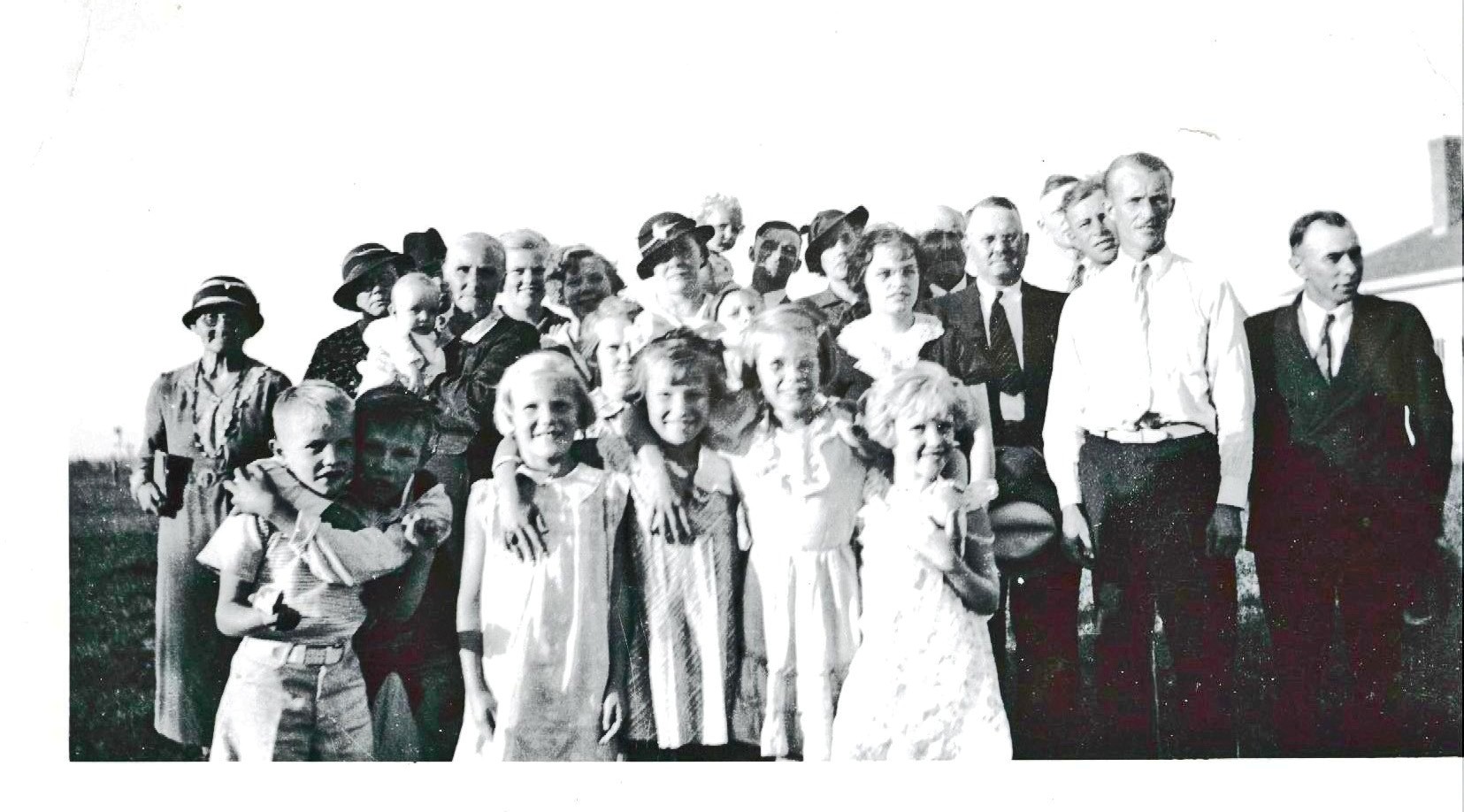 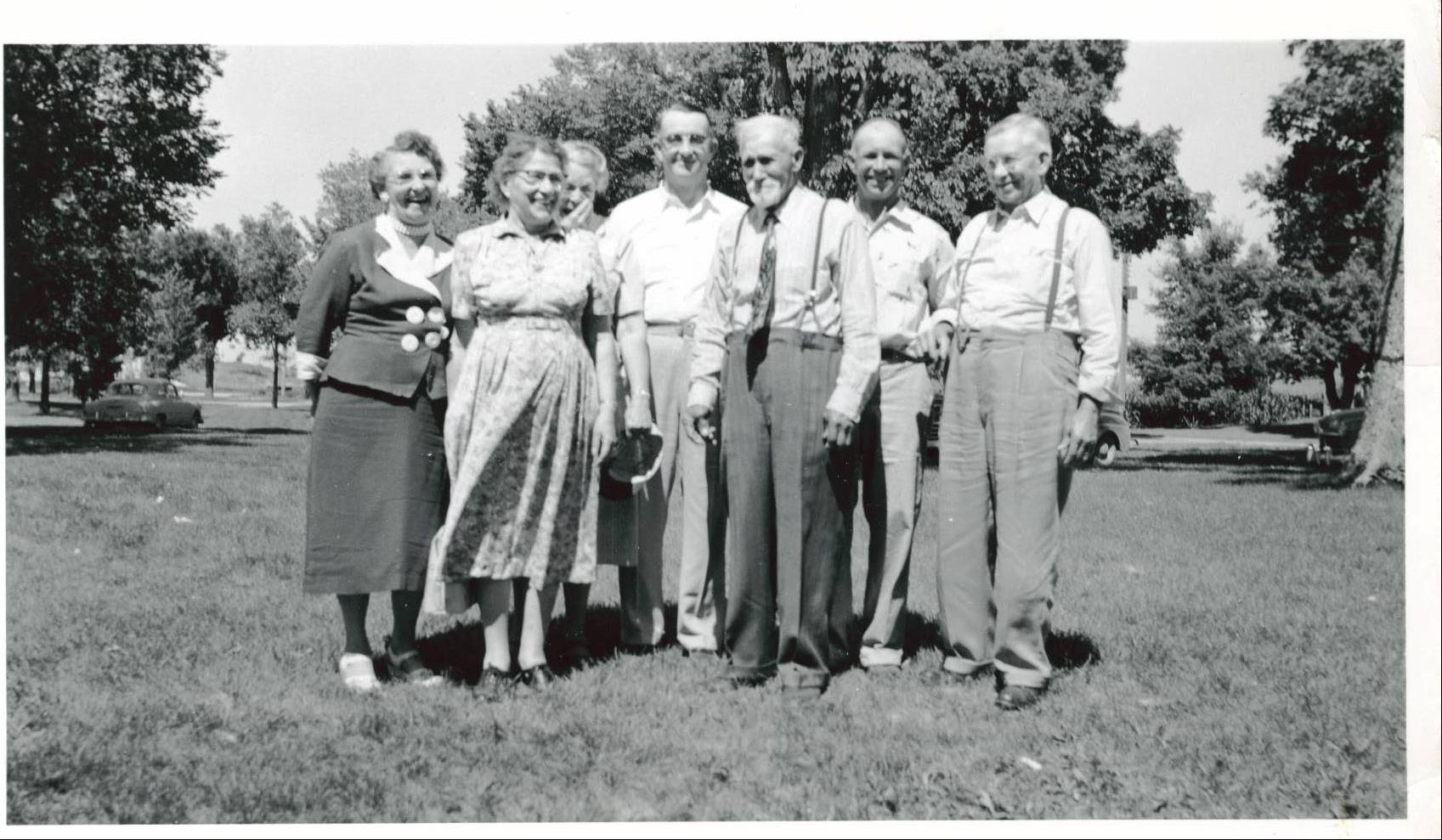 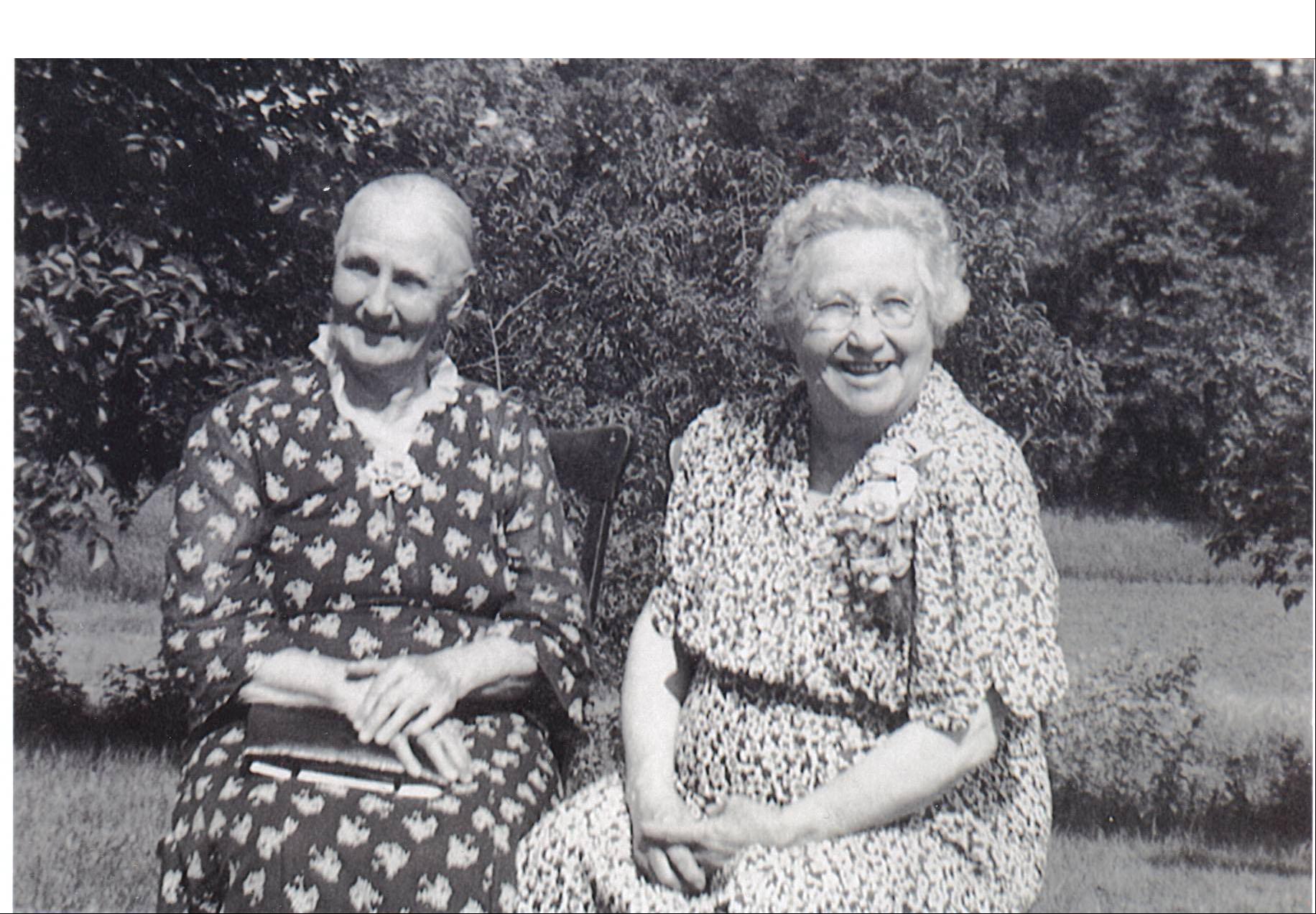 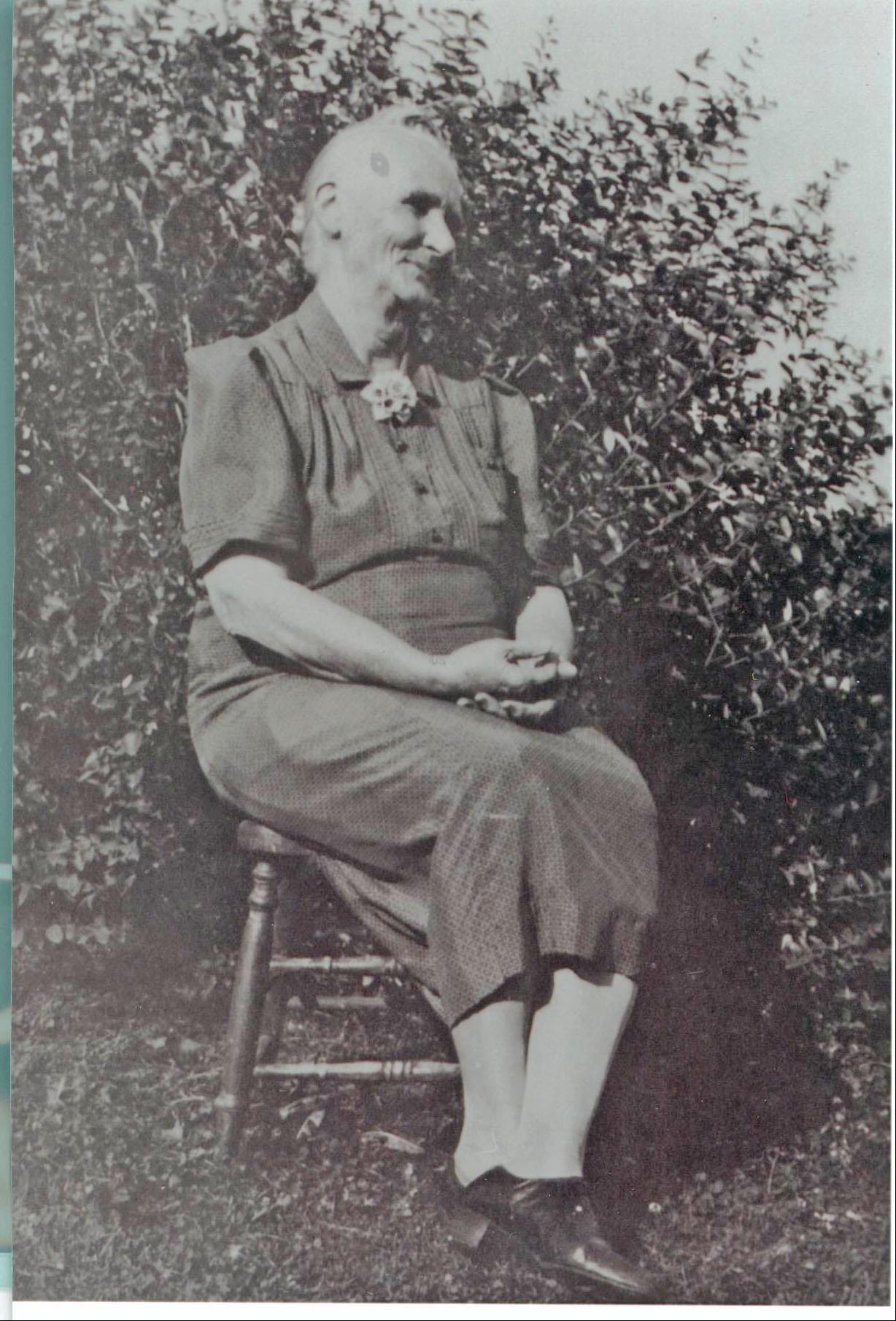