This information is from the parish records of the Karlsøy and Lyngen parishes in Troms, Norway, the 1801, 1865, 1875 and 1900 Norway census and from the records of Tromso Lutheran Church, Lake Lillian, and Kandiyohi Co. records and family histories. The parish boundaries between Karlsøy and Lyngen in Troms, Norway changed between the 1865 and 1875 census. In the USA the family name was spelled “Mathiason” and by some families, “Mattson”. Some of the same names are used from generation to generation. The spellings of names and places vary.

in Lyngejdet, Lyngen, Troms, Norway, the son of Joseph Andersen and Elen Ericsdatter, one of nine siblings. One of his brothers was Erik Josephsen, the grandfather of Erik Joseph Larson. In the 1801 census the family was on the “farm” Lyngesjdet and the father, Joseph Andersen, age 52, was listed as a fisher and farmer and “lappe-folk”, (Sami). Elen Ericsdatter’s age was given as 50. Mathias was confirmed in 1810 at the age of 23. He married Ane Andersdatter on September 24, 1815 in the Lyngen Parish. She may have been born in October, 1788 the daughter of Anders Erichsen and Anne Josephsdatter in Lyngensdalen and baptized on July 7, 1805. Mathias Josephsen and Ane Andersdatter moved from the Lyngen parish to Karlsøy parish sometime between 1817 and 1819. Mathias Josephsen was apparently a respected member of the community because he or he and his wife were Godparents at least 23 times for relatives and other children, including Erik Joseph Larson in 1834, Ingeborg Johnsdatter in 1842, Erik’s future wife, and Mathias’ grandson, Mathias Mathiasen in 1859. Mathias Josephsen died April 12, 1874 in Sørfjorden, Lyngen Parish and Ane Andersdatter died July 17, 1830 at Bredvig, Lyngen Parish.

Children of Mathias and Ane:

The second wife of Mathis Josephsen was Elen Larsdatter, born about 1800 and married about 1831. She died on April 21, 1859. In the 1865 census, Karlsøy Parish, he was on the farm Bredvig as a widower, born in 1786, a farmer with 1 cow and 3 sheep. His housekeeper is Nille Nicodemusdatter, widow, age 75, both are “finner forsstaar norsk” (Sami, understands Norwegian.) Nille Nicodemusadatter’s sons, Nils, Ole and John Nilsen, drowned with Joseph Andreas and John Mathisen. Mathias Josephsen died April 12, 1874 in Sørfjorden, Lyngen, his birth year was given as 1781. In various records there were 3 different years of birth given, 1789, 1786 and 1781.

The children of Mathis Josephsen and Elen Larsdatter;

The Nils Mathiasen family about 1900 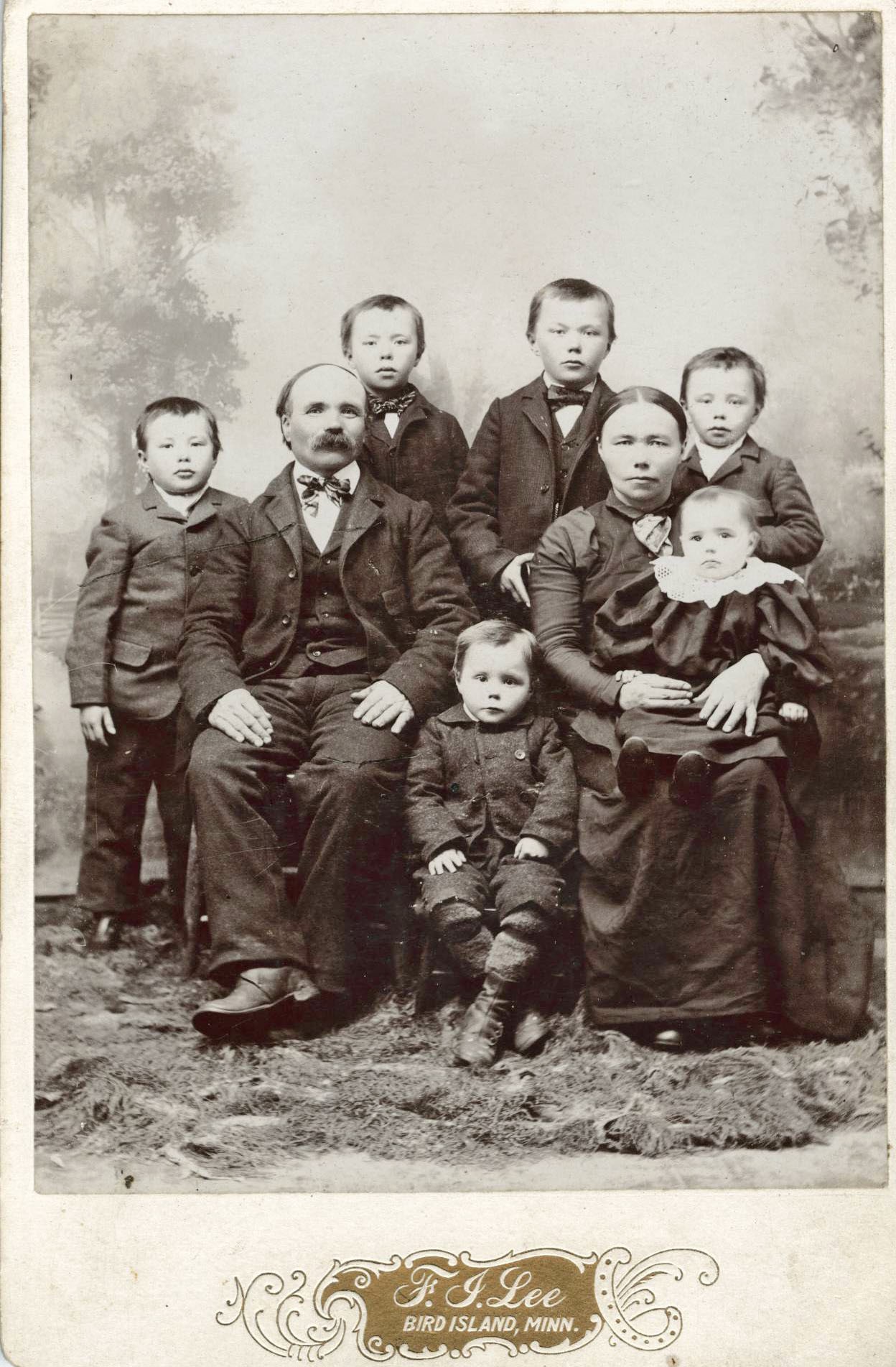 Joseph Mathias Mathisen was born Dec. 21, 1853 in Bredvig, Karlsøy Parish. One of his godparents was Morten L. Mathisen. He was in the 1865 and 1875 census on Bredvig with his parents; Ethnicity, "fin.” He married Birgitta Nikoline Nilsdatter on August 5, 1876 in Tromsøysund, Troms, Norway.. She was born January 11, 1853 in Tromsø, Norway, the daughter of Nils Andreas Johnsen, Oldervig and Bered Nilsdatter. They emigrated to America in June 1878 with their son, Nils Mathias Josephsen, born on May 6, 1877. They were in the 1880 and 1885 Kandiyohi Co. census in Fahlun Twp. In the 1880 census they had a son, Christian, age 2. Is this the same person as Nils Mathias but given a different name? The children with them in the 1885 census are Josephine, born April, 1881, Edward, born June, 1882 and Nils, born August, 1884. Joseph appears to be in sec. 24 of Fahlun Twp. in the same area as his brother, Mathias, and Erik Larson and his wife, Alette, Joseph’s sister.. When Tromso Lutheran Church was organized on August 16, 1885, Joseph Mathiason and his wife’s names were not listed with the Original Charter Members but they were included in the April 6, 1885 meeting and also on October 10, 1886. The family moved to Washington about 1887 where more children were born. In the Kitsap Co., Washington 1910 census Edward, Nils, and Louie Mathiasen were listed in Kingston with Abbie Johnson (their cousin), Erik and Lottie (Alette, their aunt) Willander, Erik Willander and Peter and Martin Larson, the sons of Erik and Alette Larso

Mathias Mathiasen was born December 12, 1859 in Bredvig, Karlsøy Parish, Norway. One of his godparents was his grandfather, Mathias Josephsen, Bredvig. In 1865 and 1875 Norway census he was on Bredvig with his parents; ethnicity, "fin”. He was confirmed on October 3, 1875. Mathias emigrated to America in June, 1876 with his brother, Nils Andreas Mathiasen, Herman Haagensen and Ole Olsen, all from Bredvig, Troms, Norway. (They all settled in the Lake Lillian area.) Mathias landed in the port of Philadelphia in August, 1876. He was given his citizenship on July 2, 1898, there same date as his brother, Nils. Mathias’ witnesses were N. E. Anderson and Erick Nordine.

Mathias married Alette Petrikke Johnson November 22, 1884 in Kandiyohi Co. by a Justice of Peace. Their witnesses were Nels A. Anderson and Laura Patterson. Alette (born Johansdatter) was born August 28, 1863 in Lattervig, Karlsøy Parish, Norway. Her parents were Johan Peder Andersen, born in 1828, and Jenina Jensdatter, also born in 1828 and were married in 1852. In 1865 and 1875 Norway census Alette Petrikke was on Lattervig, Karlsøy Parish with her parents and siblings. She was one of 8 children. The date she emigrated is not known. Did Mathias and Alette know each other in Norway? They were both charter members of Tromso Lutheran Church. Mathias died February 12, 1908 in Lake Elizabeth Twp. and Alette died June 13, 1924 in Willmar, Minnesota. They are both buried in Tromso Memorial Cemetery.

Below, the Mathiasen girls; Front, Alice, Myrtle, Melvina, and Natalie 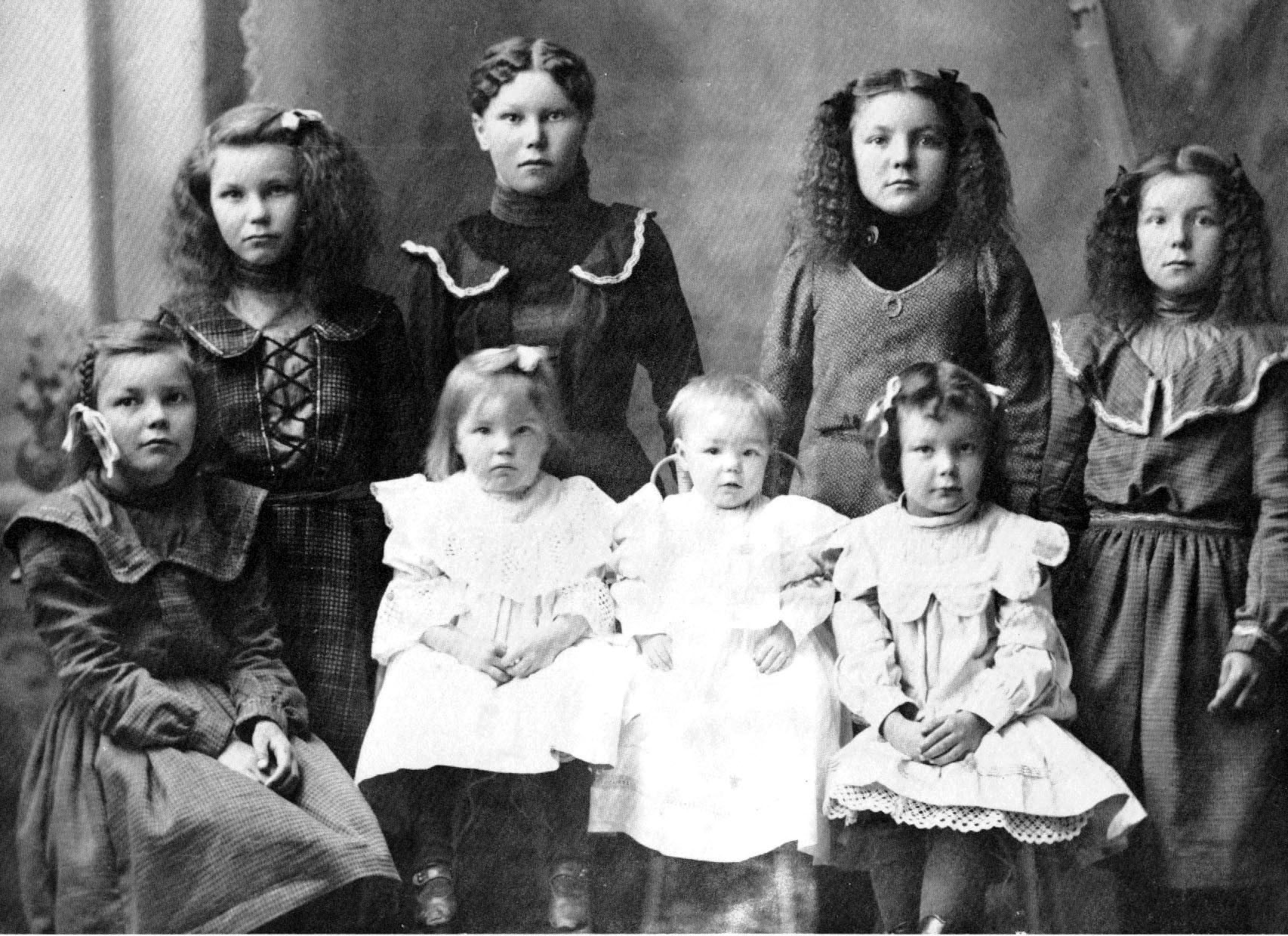 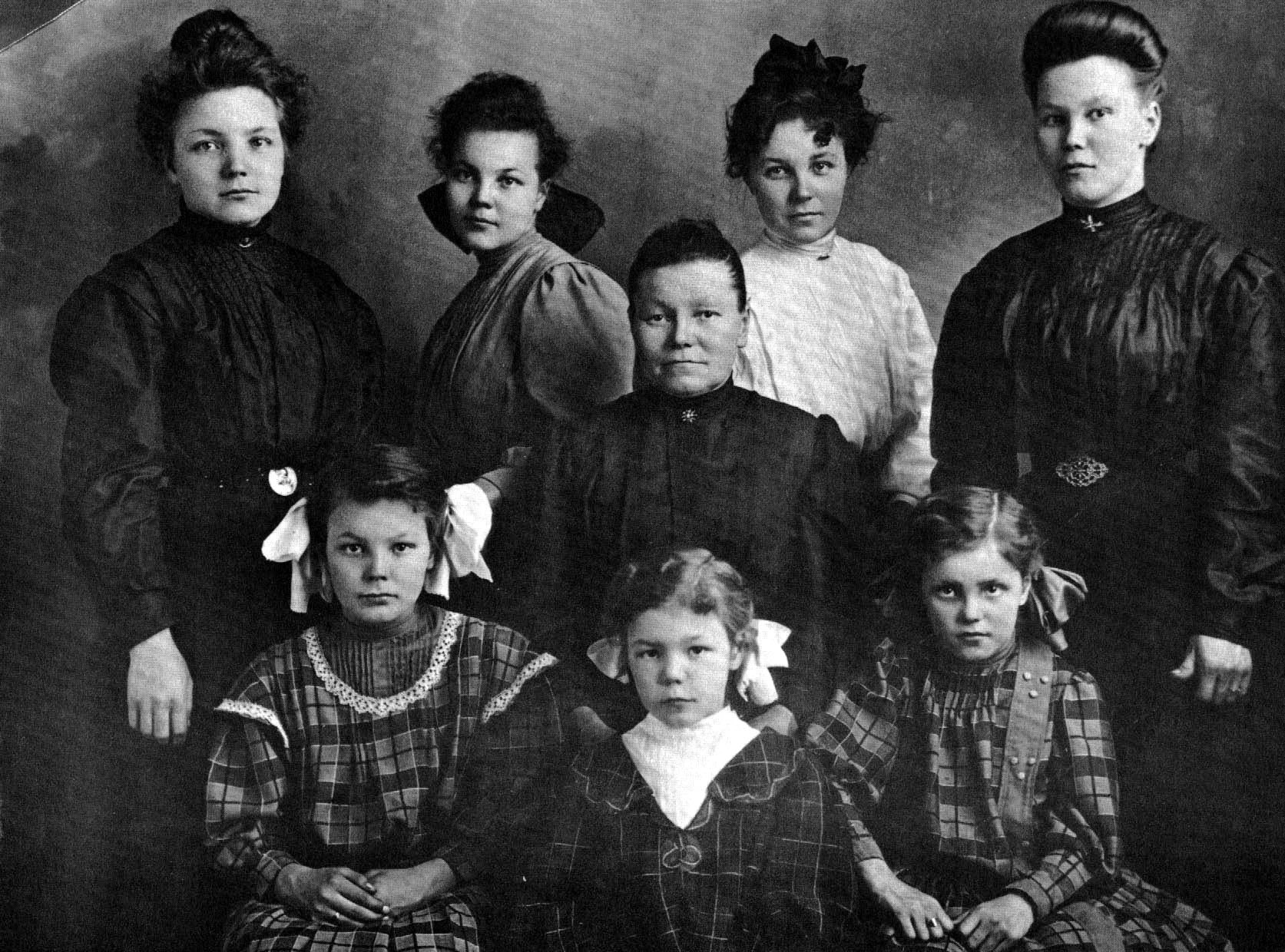 Only 5 of Alette’s 10 children lived to be adults. Alette died Aug. 22, 1917 in Poulsbo, Washington. See the descendants Alette Mathiason on the next page.

Ane Mathisdatter was born August 13, 1864 in Norway. Her baptism sponsors were Morten Mathiasen and his wife, Bredvik. She was with her parents in the 1865 census, ethnicity, “fin”. She died July 19, 1868. She is the only child of Mathias Henik Mathiasen and Ane Bergitte Johnsdatter that did not live to be an adult. All their other children emigrated to Kandiyohi Co., Minnesota.