Intro by Gary and Grace Gauer

This is from newspaper stories that were first published in 1980 just after the 50th Anniversary celebration of Alex and Ida Swanson. Expect more photos and stories to be added later. 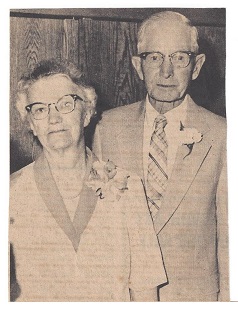 A couple who farmed every day for 21 years before taking a vacation, celebrated their 50th wedding anniversary on Sunday, June 29, at Balsam Lutheran church.

Mr. and Mrs. Alex Swanson were married at Grove City, Minn., on May 4, 1930, and began farming northwest of Amery.

They started with six cows, 16 chickens, two horses and "good neighbors." Horses were used in the dairy operation until 1947.

Their first trip to Iowa in 1951 was the first of many taken by the couple throughout the midwest. In addition, they toured Sweden two years ago. For the past nine years, they have made their winter home in Mesa, Ariz.

Seven grandchildren as well as guests and relatives from Minnesota, Iowa and North Dakota attended the anniversary celebration.

A love that lasted more than 50 years began for Ida and AlexSwanson in a winter ride on a sled used by him to haul wood and .pulled by a big team of horses.

It began in 1928 when Ida Kronbeck came by train from Grove City: Minn. to Amery to help sew for Alex's sister's wedding. His sister was a close friend of Ida's sister arid she didn't have sisters of her own to help, said Ida .

Alex met her with his big team and wagon. It was eight miles of slow riding; they both recall. At first they were quite shy together but during her stay Ida skiied and had a good time. She was very excited at seeing Wisconsin for the first time, she says

When Ida returned home, Alex followed up with a valentine. Her thank-you letter and ensuing letters impressed him and marriage plans were soon underway. Neither family. was aware of the letters at first but became excited when the romance was discovered.

Both of the Swansons were born to Swedish parents. Ida did not learn to speak English until she started school. Her Swedish heritage was encouraged each summer as she attended Swedish Bible School for a number of weeks.

Ida had worked in a home in the Twin Cities where she was in complete charge of the home including making and serving meals. She was paid a salary of $12 a week, much of which she managed to save. Alex was working the oil business in Dakota and Iowa and had saved up much of his money as well.

When the Swanson’s were married May 4, 1930 at Grove City, they had saved up enough money for a down payment on a farm about three miles from his home place near Lake Wapogasset. They had bought the farm prior to their marriage and Alex. who had visited Ida at. Grove City in his Model T Ford promised her she would get home at least once a year.

The. couple started married life on their 80-acre dairy farm with six cows. 19 chickens and two horses plus a walking plow. which Alex says he has put a great many miles on. The plow was a gift from the bride's father and is still in excellent condition. Their son Marlin now owns the plow as a valued keepsake. The eggs from the chickens were used to trade for other groceries. Ida canned-all their meat and once the children began coming along, she baked homemade bread about every other day.

Most of their machinery was old and there was no electricity. They were not to have electricity until 1939 and did not have refrigeration until much later during the 40's when the illness of a daughter who needed insulin caused them to buy one.

They rented more land and eventually milked 16 cows. The neighbors were wonderful, says Alex. Everybody helped and get along. They traded help years ago; a practice not so common these days.

Alex gives the most credit to Ida who is a very thrifty lady. "We never had much," he says, "but she knew how to make the most of it." Ida sewed and also. recalls building simple toys and furniture for her children out of apple and orange crates and cheese boxes. Never was more than 15cents spent on gifts for the children, but they were very happy, says Ida. In fact there was a marked difference between their happy dispositions and the fussing and whining of many children who have so much now, the Swansons notice. Also there was an emphasis on church, 4H and scouting activities in their home. The children were able to go to Bible camp and participate in activities that were important, says their mother.

The Swansons had seven children, five of whom are living, including Betty Mattson of Stanley, N. D.son Marlin. Who farms on the family farm and is a cabinetmaker, Sylvia Britton of Cedar. Minn. Elsie Lubke of Excelsior. Minn. and Grace Gauer of Cottage Grove, Minn.

There were ups and down's, says the Swansons. There were years of hard work .when Alex blasted rocks on his dad's farm (Richard Swanson's) and when . Ida did her housework without electricity. A milestone for her was the year she got her Maytag washer,1935. The washer is still as good today as the day they got it, says Alex, In the intervening years it has handled washings for the entire family each week. The washer caused quite a stir in the neighborhood at first. 0ne neighbor woman, who had done all her washings on a scrubboard, tried out Ida's Maytag and went right out and bought her own. Alex recalls he got his first tractor In 1947.

A highlight of the Swanson's lifetime was a trip to Sweden in 1978 arranged by their children thru the American Swedish Institute in Minneapolis. There is no describing the feeling when you land in the beautiful home country of your parents, says Ida. She talks of seeing her rnothers home place in southern Sweden with a washing stick with her mother's initials carved on it hanging in its place and of boating on the beautiful Lake Vannern. Ida could speak beautiful Swedish, says Alex. He could understand it, But could not speak it while they were in southern Sweden. When they visited farther north where Alex's people were from it was reversed, laughs Ida. The dia1ect, which was strange to her, was very natural for Alex and the language came back to him.

The Swedish relatives were so kind to them during their three week visit, says the Swansons. Four of the relatives have died since the visit, making them very glad they went when they did. They also found a Swedish- English dictionary given to tbem by their grandson, a considerable help both in language skill and in money exchange.

Besides having roots in Sweden, Alex also has many roots in the Lincoln area of Amery where his dad and he both attended the Sucker Lake school. Two of the Swanson's children also attended there before it integrated with Amery and Alex served on the school board.

Alex developed a crippling form of arthritis a few years back and was unable to use his hand. Doctors suggested he try moving to Arizona winters. Fortunately the arthritis was arrested. The Swansons went from dairying to beef on their farm in 1969 and in 1971 Marlin bought the farm. Alex and Ida lived in a new smaller house on the place but gradually weaned themselves away and Marlin sold the smaller house. Leaving the farm was one of the most difficult things they've done, says the Swansons.

Now they have many friends in Arizona and spend summers staying with their children in this area. They all have large gardens which. Alex enjoys working in. Hard work is good for people, Alex notes: They have spent nine winters in Arizona, driving back and forth 19 times.

They both say they can't complain about their life which has centered on their family, good neighbors and their church. The hard work was apparently health giving as they both enjoy comparative good health.

Sunday, June 29 when they celebrated at the Balsam Lutheran Church, upwards of 150 friends and relatives joined them, The event was sponsored by their children and seven grandchildren, all of whom were with them.

Ida was very proud to wear a dress which her youngest daughter Grace sewed for her.

All of the Swanson girls sew their own clothes and do all their own baking which is a point of pride to their parents.

Alex likes to tease Ida that when she came to Wisconsin long ago, she was going prospecting. But it is apparent as he looks at her that it is he who is sure he found gold.