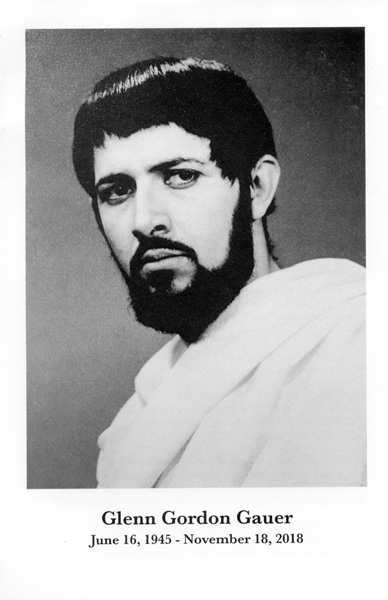 LEGACY: A life in the Performing Arts

Artists and teachers touch so many with their lives and works, from students who are inspired by the mentoring to strangers who view the artist's work without knowing the man behind the legacy. Glenn Gauer was such a man. Husband, father, friend, a guide through daily life, a work horse through his creativity in theater, and a man to remember with joy.

Glenn Gordon Gauer was born in Great Falls, Montana on June 16, 1945 to La Vaughn and Clarence Gauer. He was active in local theater all through his early life and took his BFA in Theater from University of Montana, Missoula graduating in 1969. He was a founding member of the Montana Repertory Theater touring Montana, Idaho and Utah under the direction of Firman H. "Bo" Brown. Glenn acted, designed, and drove the touring truck, starting a legacy of performing arts to the Western States.

Glenn's education was interrupted when he was drafted into military service. He did his basic training at Fort Lewis in Washington State and achieved the rank of Entertainment Specialist SP/ 5, serving from 1969-71.

He received the Duquesne Fellowship to Carnegie Mellon University, achieving his MFA in Theater Design in 1973. His graduate thesis project "Under the Gaslight" was featured in the October 1973 issue of Theater Crafts

Glenn started teaching at Portland State University in 1978, attained full Professor status in 1988, retired in 2011, and taught for one year as Professor Emeritus in 2012. He designed sets, lighting, and/ or directed over 50 productions for Portland State University, as well as teaching. During this time, he also designed or directed 50 productions for Portland's Theatre Company SRO (1974-90,) winning best Set Design for Sweeney Todd at SRO and Best Set and Lighting Design for Tartuffe.

Outside of work, Glenn had a full and fulfilling life with his family and friends, and enjoyed traveling the world. He had the incredible ability to thoroughly plan any trip, and was the greatest travel agent in the world. He was a guide and helper to those near him, and will be dearly missed.